On the backdrop of the crisis in Gaza, Israel considers internal Palestinian reconciliation a security interest and a possible end to arson kite attacks. 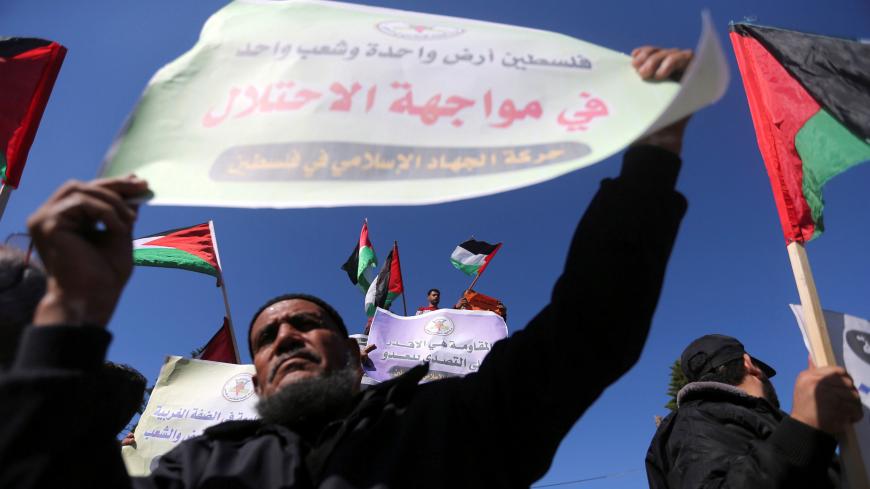 Palestinians are no longer excited every time there is talk of a possible reconciliation between their two main representative movements, Hamas and Fatah. On Oct. 12, 2017, the two sides signed an Egyptian-brokered reconciliation agreement in Cairo. Palestinians in the Fatah-ruled area of the West Bank and Hamas-run Gaza Strip cheered, but not for long. Almost a year has gone by, and the alienation between the two sides has only deepened. Every time a new initiative is reported on implementation of the deal that was not worth the paper on which it was written, Palestinian social media accounts are filled with derisive comments. These comments joke about “the fake news industry” and claim that Palestinian journalists and politicians are simply floating trial balloons out of sheer boredom.

But this time, a Palestinian security official tells Al-Monitor, things are looking different. “Reconciliation was never closer than it seems now,” he says, on condition of anonymity. According to his assessment, the sides are close to agreement on an Egyptian-proposed compromise over their biggest dispute: control of Gaza’s security forces and disarming of the Hamas military wing.

Israel is a passive, behind-the-scenes supporting actor in the deal that seems to be emerging, but for the first time it views such a development as being in its own best interests because of its potential to restore calm to the Gaza Strip. “The Egyptians do not formulate any plans and do not make a single move without Israel being involved and giving its approval in principle. Israel is updated about all the details,” says the source.

Under the Egyptian compromise proposal, the source explains, forces under the control of Palestinian President Mahmoud Abbas would deploy along Gaza’s border with Israel “because, after all, he is the commander in chief of the Palestinian armed forces.” Abbas is being kept abreast of every detail and understands that if his forces are to deploy smoothly and safely along the Gaza border, Israel has to sign off on the deal. The police contingent of the Palestinian Authority (PA) will have to pass through Israeli territory to get from the West Bank to Gaza, carrying their arms and ready to hit the ground running. Israeli security officials see this joining of Palestinian forces as a reasonable default option given the alternatives recently discussed by Israel’s defense Cabinet. PA deployment along the border would drive away the Palestinians who have been dispatching arson kites into Israel and massing along the fence in protest demonstrations. Once the PA police fan out, Israel will hold Abbas responsible for events in the Strip. Unlike contacts with Hamas that required so far intermediaries to convey messages and reach understanding, Israeli and PA security officials conduct direct, effective contacts.

Of note is the fact that despite record tensions between the PA and Israel after the United States moved its embassy to Jerusalem in May — and despite the harsh criticism against Abbas from his numerous and constantly growing number of detractors in the West Bank and Gaza Strip — the security coordination with Israel in the West Bank continues. That does not mean, by the way, that if the Egyptian proposal is accepted and PA forces start policing the border fence, the security coordination would also apply to Gaza.

In April 2014, Prime Minister Benjamin Netanyahu walked away from peace talks with the Palestinians over such an inter-Palestinian reconciliation prospect. Paradoxically, after being vehemently opposed to a Hamas-Fatah unity government, Israel currently sees the Egyptian proposal based on the establishment of a unity government as a positive solution that advances its security interests. After all, top Israeli officials have been warning repeatedly that the situation in Gaza is dire and expressing concern that a humanitarian collapse would result in a wide-ranging armed clash.

The heads of Egyptian intelligence, who are tasked with the contacts between Hamas and Fatah, are unwilling to discuss progress in the talks and the latest plan initiated by the new intelligence chief, Abbas Kamel. However, it appears that the minute an agreement is reached and PA forces enter the Strip, as fast as possible, the relationship between the sides will enter a new chapter. Fatah and Hamas will start a new phase after over a decadelong rift created two rival, clashing Palestinian entities. If an agreement is reached, its implementation would be a matter of days or a few weeks. The time issue is important; the deal must be implemented speedily to prevent either side from reconsidering it.

The Hamas leadership, including that of its military wing, has already agreed to the proposed course of action. Hamas leader Ismail Haniyeh announced that publicly on July 19. They have no choice. Egypt is exerting strong pressure, tensions with Israel are escalating steadily, the lulls between the rounds of Israel-Hamas fighting are growing shorter — and unless they agree now to compromises with the rival Fatah, another war with Israel is just a matter of time.

Egypt is focusing its pressure on Abbas, considered a “reconciliation refusenik.” Now it seems that Abbas is leaning toward the conclusion that reconciliation with Hamas is a pressing need, with the PA assuming control over tax and customs collection and overseeing economic affairs in Gaza. Tax collection in Gaza, where the unemployment rate is one of the highest in the world, sounds like an impossible mission, but this phrasing in the agreement is deliberately blurred for another reason. Transferring financial control to the PA in Gaza is a way to anchor Abbas’ active involvement in Gaza’s future rehabilitation. Tens and possibly hundreds of millions of dollars will then be donated by the Gulf states, and the PA’s people will be in charge of overseeing “disbursement.” None of the players in the political arena wants to give Hamas control or even proximity to the funds designated for improving the lives of Gaza’s 2 million Palestinian residents.

And so, in a matter of days or several weeks at most, the fate of the reconciliation will be determined. Abbas wants to set a timetable that will allow him, or his successor, to control all the Palestinian security forces in the West Bank and Gaza. The proposed solution provides for gradual control in accordance with developments on the ground. The truth is that the Palestinian leader does not have too many options, either. Agreement to the Egyptian plan, in which Israel is a supporting player, is a default option. Unless he accepts it, he will step down from the political stage and be remembered as the leader who refused to make a go of uniting the Palestinian people and whose policy set back the Palestinians for ages.

Reconciliation seems a final lifeline for both Hamas and Fatah, with Israel and Egypt holding on from both sides and helping the sides pull themselves out of the morass in which they are mired.