The wave of protests in the southern province of Basra is escalating, even as the government promises to improve the status of the province in order to calm the street. 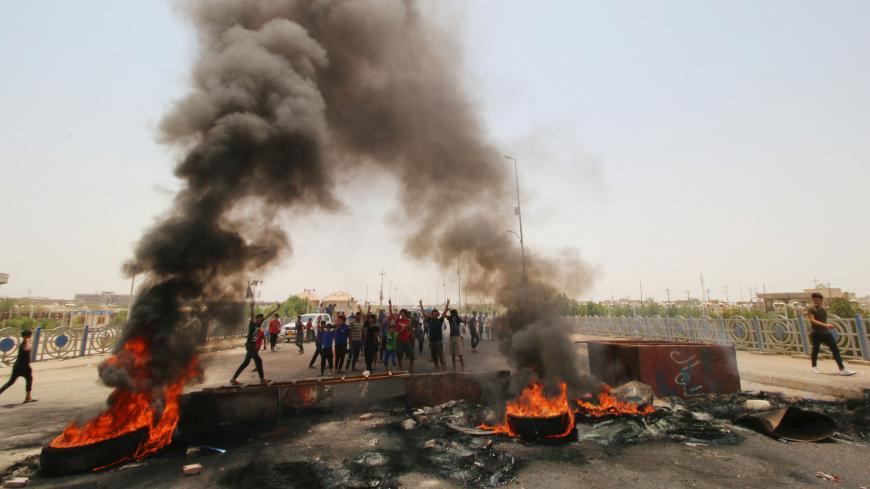 Iraqi protesters burn tires and block the road at the entrance to the city of Basra, Iraq, July 12, 2018. - REUTERS/Essam al-Sudani

Protests continued for the sixth day across various parts of Iraq’s southern Basra province, with the government failing to provide realistic solutions to restore order to the streets.

Prime Minister Haider al-Abadi arrived in Basra July 13, directly from Brussels where he had attended an international meeting of states participating in the coalition against the Islamic State (IS) on July 12. This was one of the protesters' demands: to see the prime minister in the province so that they could discuss their demands with him face to face.

Leader of the Bani Tamim clan (one of Basra’s largest tribes) Muzahim al-Tamimi, whose sons participated in the protests, published a statement on his Facebook page calling on the prime minister to "return immediately [from Brussels] to address the people of Basra directly … and to invite large corporations to undertake major projects [and] establish a power station and desalination plant, while at the same time seizing the opportunity to partially eliminate unemployment and accelerate the transferral of Basra’s investment refinery to the Fao [refinery project].”

Tamimi said when protesters see that the government is serious, they will return to calm. Yet there is no sign of calm among the protesters in Basra. On the contrary, the protests are spreading across the country, as hundreds of protesters stormed Najaf's international airport on Friday and others surrounded the governor's house in the southern city of Nasiriyah on the same day.

In a statement on July 12, Iraqi President Fuad Masum called on the provincial and federal governments to work hard and swiftly to respond to the legitimate demands of demonstrators. He called on protesters to remain peaceful, exercise restraint, abide by the law and refrain from damaging government property or oil company headquarters.

Protesters, meanwhile, demanded that the government improve services and address the deteriorating crises of salinity, water shortage and frequent power cuts, as well as issues of unemployment and housing in the region.

The wave of demonstrations has escalated in recent days, with crowds of hundreds from Basra’s Shatt al-Arab district cutting off the roads leading to the Shalamjah border crossing with Iran on July 12.

Dozens of demonstrators stormed the offices of South Oil Company in Basra on July 12 before security forces regained control of the site the same evening. Protesters have now blocked the routes to local oil refineries, setting up tents on the main streets near the oil fields.

On July 13, special forces from the counterterrorism unit arrived in Basra to protect the oil companies and oil fields in the province.

Equipment from the oil fields has also been stolen in the ongoing protests, but demonstrators managed to arrest eight of the perpetrators on July 11, handing them over to the authorities in an exchange of confidence between the protesters and security forces.

While a number of areas in Basra province witness violent demonstrations, including road blockages and tire-burning, the pace of protests escalated after a demonstrator was killed and several others injured near an oil field in West Qurna on July 8.

With protests continuing, foreign oil companies have begun operations to transfer their international employees from Basra province in efforts to avert any possible attacks on them. Local media reported July 12 that helicopters evacuated staff from the Lukoil headquarters in Qurna’s second oil field, as security forces stepped up their presence in the area after a checkpoint was burned by demonstrators. But the Ministry of Oil denied the news.

Following an upsurge in demonstrations, Prime Minister Haider al-Abadi on July 11 commissioned a delegation of five ministers to visit Basra city to listen to protesters’ demands and resolve their grievances. The announcement came during Abadi’s official visit to Brussels.

On July 11, the ministerial committee arrived in Basra province, where they discussed rapid and practical solutions to the challenges facing the region. The committee also held a number of meetings with the province’s government representatives, tribal leaders and dignitaries to consider local needs, after which it was announced plans for short-, medium- and long-term service projects.

Oil Minister Jabbar Ali al-Luaibi who heads the ministerial committee, said in a statement July 12, “The Iraqi government wishes to raise the level of services for citizens in Basra province and to promote economic outcomes in agriculture and industry. This follows a series of consultations held by the ministerial committee with the president and members of Basra’s regional council.”

Luaibi added, “We have discussed all the province’s primary needs and challenges, and the ministry has submitted a working paper to the ministerial committee relating to core services.” According to Luaibi, a strategy will be carried out consisting of “three plans … an urgent plan to be implemented within one to two months [for water, electricity, health, public services and security], a medium-term plan for three to six months and a long-term plan for implementation within two years.”

The committee announced its decision to grant Basra’s water department "$2 billion to develop its drinking water sector to equip residents with additional potable supplies” and to "increase the hours of electricity supply [in the governorate] after a resumption of the connection with Iran, within days.”

The committee also pledged to allocate "10,000 jobs for the people of [Basra] province, which will be dispersed according to population density in each district and areas with existing appointments.”

Ultimately, there do not appear to be realistic solutions to the present crisis under current political and economic conditions. The new government has not yet been formed, and the new government will be unable to adopt any large economic projects due to its weak structure, which depends on sectarian quotas. This serves as a caution about repeated waves of protest and a rising tide of anger that could put the country on a path to undesirable consequences.