Iraqi protests escalate with no new government in sight

Cities throughout southern Iraq are witnessing violent demonstrations, and the government has failed thus far to address citizens' demands and stop the protests. 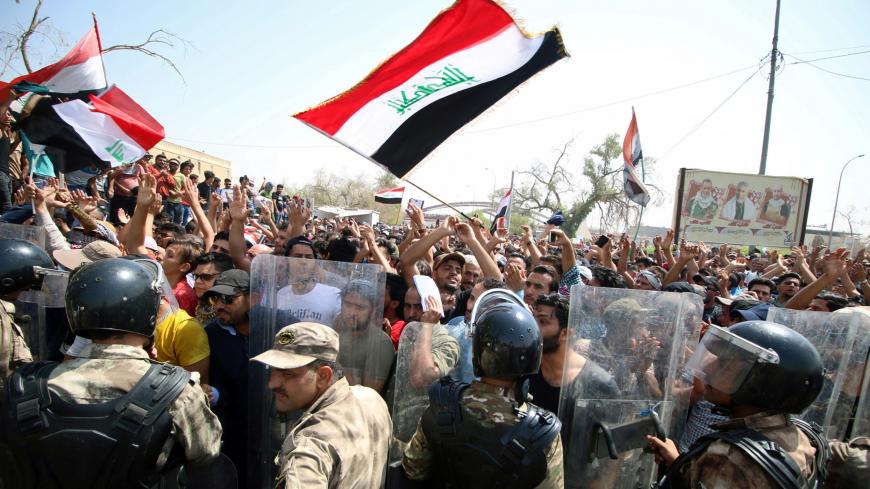 Protesters in southern Iraq took to the streets July 16, continuing demonstrations over poor public services and corruption for the ninth day in a row. The protesters are demanding consistent electricity service, clean water and better public services.

The protests, which started with a small group of demonstrators in the southern city of Basra 10 days ago, have expanded very quickly in that city and other areas in Iraq’s south, including Karbala, Najaf, Nasiriyah and Amarah, among others. The use of violence against protesters in Basra, which resulted in the death of one protester on July 8, in addition to the government’s delay in addressing the demonstrators’ demands have poured oil on the fire and caused the wave of protests to spread throughout the southern areas.

Prime Minister Haider al-Abadi appointed a special committee of five ministers to address the protesters' demands prior to his departure to Brussels July 11 to attend a meeting of the coalition against the Islamic State (IS).

Upon his return from Brussels July 13, the premier headed directly to Basra to discuss the protesters’ demands with them directly. He made several promises to provide jobs, electricity, clean water and other services to the city, as he released funds for these matters to the local government. He also ordered to cut a portion of Mosul’s electricity to provide more electricity to Basra. These measures, however, failed to calm the streets.

Iraq’s top Shiite leader, Grand Ayatollah Ali al-Sistani, expressed solidarity with the protesters on July 13, saying they faced an “extreme lack of public services.” He also asked the protesters to not attack and damage public buildings.

In most of the affected cities, the ongoing protests have turned into sit-ins outside government buildings and major oilfields. In Basra, many protesters have organized a sit-in next to the border with Iran.

In order to protect the oilfields and oil companies, Abadi sent special counterterrorism forces to Basra last week. The special forces were deployed to other southern cities as well. Abadi, who is also the commander in chief of Iraq’s armed forces, issued a nationwide order to security forces placing them on high alert after his visit to the city of Basra.

The primary roads between the main southern cities, such as Karbala and Najaf, are full of checkpoints where people and vehicles are inspected thoroughly. An Iranian engineer who works at an electricity generation site in Najaf told Al-Monitor July 16 on condition of anonymity that he had been stopped at several checkpoints on his way back from Karbala to Najaf and was questioned for hours. His company advised him to either stay at the site or go to Iran to avoid any harm from the protesters.

In Samawah, security forces shot and killed two protesters July 15 and injured several more. In Basra, Iraqi police fired into the air to disperse protesters in the area, which resulted in two protesters being wounded. Earlier, police in the oil hub of Basra wounded 48 people. According to Maj. Gen. Thamir al-Hussaini, the commander of the Interior Ministry’s Rapid Response Forces, about 28 members of the security forces were also wounded.

The government also cut the internet last Friday to stop communication between the protesters. The internet had returned to most areas in the south on July 16.

Anti-Iranian sentiment is also spreading through the Iraqi protests. The protesters are burning photos of Iranian leaders, such as leader of the Islamic Revolution Ruhollah Khomeini and current Supreme Leader Ali Khamenei. They also shouted slogans against Iranian interference in Iraq and blame Iran for supporting failed governments in Iraq.

The political parties in the government, such as the Dawa Party, have blamed the Baath Party or IS for being behind these protests. Some also blamed Saudi Arabia for organizing and financing the demonstrations. There are also rumors among the protesters that the United States is supporting the popular movement in order to prepare for appointing Maj. Gen. Najim Abdullah al-Jubouri, the commander of the Ninevah Operations, as a military governor in Iraq. Jubouri had been in the United States for several years before 2014, when he returned with US support to participate in Iraq’s fight against IS.

This all comes in conjunction with the delay in the formation of the new government. The final results of the May 12 elections have yet to be approved by the federal court, and the winning coalitions haven’t been able to bring together the required majority to form a new government. The last parliament’s term ended on June 31, but the new parliament has yet to be formed.