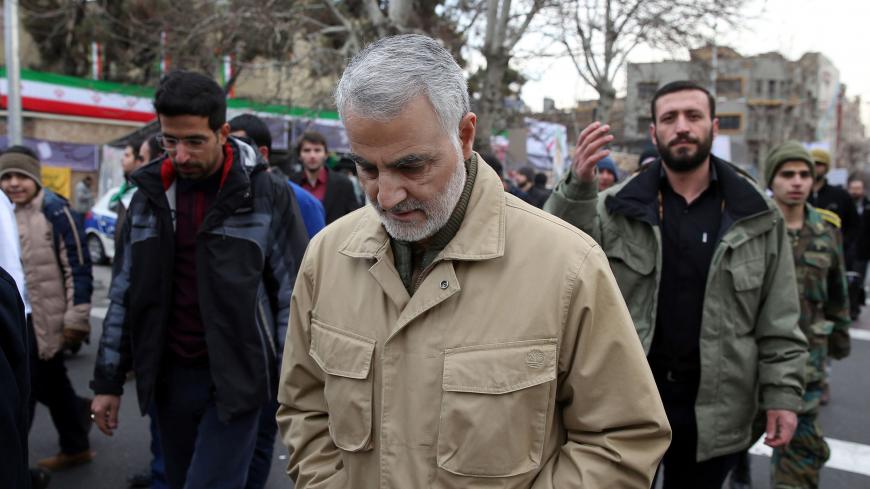 After the American and Iranian presidents engaged in a war of words, President Hassan Rouhani decided to step back, saying of Trump’s tweets, “There is no need to respond and go back and forth with them.” But then, just as there seemed to be a lull in tensions, Quds Force commander Maj. Gen. Qasem Soleimani addressed President Donald Trump directly.

During a July 26 speech in the city of Hamedan commemorating Operation Ramadan from the Iran-Iraq War, Soleimani directed his words at Trump over his threats, saying, “It is not at the level of our president to respond to you. I will respond to you as a soldier.” Quoting part of Trump’s tweet, Soleimani said, “You threaten us with action that has no precedence in history. This is the language of a cabaret. Only a cabaret owner talks like this with the world.”

The Islamic Revolutionary Guard Corps leader continued, “What can you do that you haven’t done in the last 20 years? You came to Afghanistan with dozens of tanks and hundreds of helicopters and committed crimes. What have you done from 2001 to 2018 with 110,00 soldiers? Today you’re begging to have dialogue with the Taliban?”

Continuing on the point of American presence in Iraq and Afghanistan, Soleimani added, “Do you remember how you used to provide adult diapers for your soldiers in tanks and now you threaten us? What did you do in the 33-day war (between Israel and Lebanon)? Did you not accept Hezbollah’s terms for ending the war?” He also reminded Trump that it was American commanders at the time who asked Soleimani to use his influence in Iraq to stop attacks on US soldiers while they exited. Soleimani also said the United States and its allies, using the most advanced US weapons, have not been able to subdue Yemen and have turned the Red Sea, which was safe, into an unstable part of the world.

Referring to Trump as a “gambler,” Soleimani said, “I will stand alone against you.” He added, “This nation has passed through difficult events. If you start the war we will end it. Ask your predecessors. Do not threaten us with death. We are ready to stand against you.”

Soleimani also had praise for Rouhani, whose comments warning to the United States not to “play with the lion’s tale” initiated the most recent war of words between the United States and Iran. “Our dear and valuable president spoke words that were from our heart,” Soleimani said. He added it was a mistake to criticize Rouhani for his comments as some within the country have done.

Soleimani also addressed domestic issues, specifically the management of the country. While not referencing corruption or mismanagement of any individuals, he said, “Maybe with [correct] management there will not be any miracles but we can create approval, justice, coexistence and brotherhood.” He said that during the Iran-Iraq War no one would ask if an individual was a leftist or a Principlist or a Reformist. Rather, Soleimani said, people were judged based on their abilities and their responsibilities.

While Rouhani is receiving praise from the country’s hard-liners for his tough stance against the United States, he is battling a currency crisis that has forced him to reshuffle his Cabinet. Abdolnasser Hemati has replaced Valiollah Saif as the head of the central bank. Also, the head of Iran’s Planning and Budgetary Organization, Mohammad Bagher Nobakht, said that he had resigned, but that Rouhani had rejected the resignation.

Regardless, rumors of a Cabinet shuffle have been swirling for months given its inability to address the currency crisis. Many are not impressed with the changes. Economist Gholamreza Nazarboland told Shargh Daily that simply changing the Cabinet is “useless.” He compared it to Mohammad Reza Shah changing his prime ministers multiple times in the final years of his government. He urged “fundamental changes” to address the myriad economic problems.

Iranian journalist Arash Hasania tweeted that changing the economic team of the administration is like “changing the wallpaper in the dining room of the Titanic.” In a follow-up tweet he wrote the hashtag “fundamental changes.”