Blackouts return to Iran’s electricity grid in the face of prolonged drought and record power consumption. 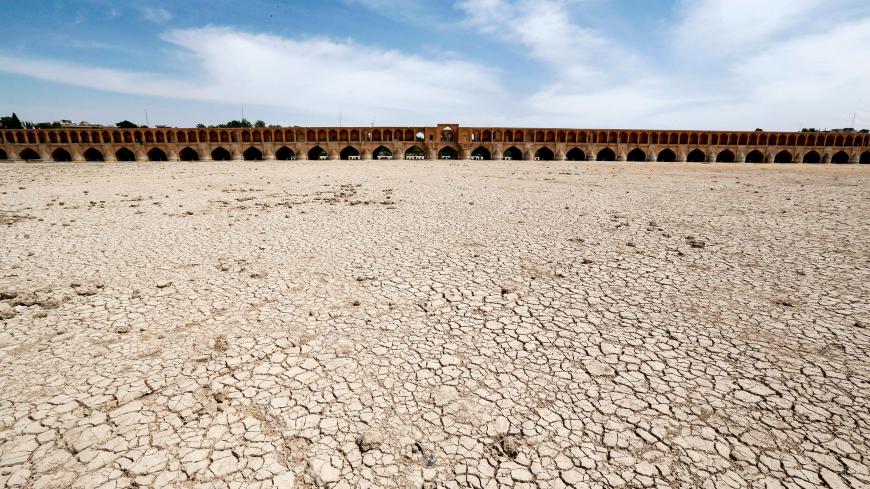 A general view shows the Si-o-se Pol Bridge over the Zayandeh Rud River, a river that now runs dry due to water extraction before it reaches the city of Isfahan, Iran, April 11, 2018. Drought has meant less water to power Iran's hydroelectric plants, which in turn has meant electricity shortages. - ATTA KENARE/AFP/Getty Images

Iran has been gripped with drought for over a decade, and the country’s precipitation has dropped to its lowest level in the past half-century. According to the latest recorded figures by Iran’s Ministry of Energy, there have been 166 millimeters (6.5 inches) of rainfall across Iran in the current water year (from the beginning of October 2017), which is 26.5% lower than the same period last year.

The situation along with an annual increase in electricity consumption and the summer heat wave that has hit the country have resulted in power shortages in recent weeks. The hourslong power outages, which have repeatedly occurred in many cities, including the capital city of Tehran, have affected many businesses and citizens. Many people, including the elderly and the disabled, have complained about getting trapped inside elevators.

A manager of a workshop in central Tehran told Al-Monitor, “The power cuts are costing us money. Each day we rush to complete our work thinking the power may cut off at a moment’s notice. This is bad for morale.”

With temperatures above 50 C (122 F) in southern provinces such as Khouzestan and about 40 C (104 F) in Tehran, Iran’s electricity consumption June 26 reached a new peak of 55,443 megawatts (MW) at 4:38 p.m. local time — 1,200 MW higher than the previous record — which resulted in widespread blackouts due to “overheating” of the power grids.

Various districts in Tehran have experienced two to three hours of unannounced power cuts in recent days, leading citizens to believe the cuts are being planned by energy officials who are not informing the public. However, officials denied any planned power cuts and said they only happen when consumption reaches a higher level than the distribution network can handle.

Although it is common for Iran to experience a surge in electricity consumption at this time of year, officials say a main factor behind this year’s power shortage is the years of low rainfall and drought, which have resulted in lower saved water in dams.

While it has just been a few weeks since Iranians have been experiencing temporary power cuts, Energy Minister Reza Ardakanian had been warning about tangible effects of lower rainfall on electricity generation as early as January.

He also warned that power outages are inevitable in summer. “Since the volume of water behind the dams is significantly lower than usual, if residents do not decrease electricity consumption, power cuts will be inevitable across the country,” Ardakanian said April 8.

With lower water at Iranian dams, the country’s ability to generate electricity through its hydropower plants has reached a maximum output of 5,000 MW this summer, far lower than last year’s figure of 9,300 MW.

According to Mohsen Tarztalab, the managing director of Thermal Power Plants Holding Company, Iran is currently faced with an electricity shortage of 5,500-6,000 MW.

Another main factor behind the current power shortage is that Iran experiences energy transmission and distribution losses above the global average. International Energy Agency statistics say the global average of such losses was about 8.26% of total output in 2014, while Iran’s average electricity loss was 12.6%.

However, the situation is improving when it comes to these losses. Massive investment and renovation of outdated infrastructures helped reduce the average electricity loss in Iran to a new low of 10.7% in the Iranian calendar year of 1396 (ended March 20, 2018); the figure is expected to fall to 9% in the next four years.

Some blame the country’s high use of electricity — it is the 18th-largest consumer of electricity in the world — as one more crucial factor behind the power shortages this summer.

To address the electricity shortfall, several steps have been taken. In Tehran, for instance, the working hours of all government bodies, banks and municipalities have changed starting July 7 to save more energy. Based on this decision, the above-mentioned institutions will be open from 6 a.m. to 2 p.m., and all government bodies have been ordered to shut down their cooling systems after 1:30 p.m. to reduce electricity consumption at peak hours.

The measure is said to reduce Tehran’s electricity use by 10% and the national consumption by 2,000 MW. The Iranian Electricity Distribution Company has also warned that electricity to organizations and institutes that don’t observe the announced conservatory plans will be cut.

In addition, the provincial electricity company in Tehran has announced a timetable that outlines its potential power-cut plan. Similar measures are expected to be taken by several other major cities in coming days.

With recent protests in urban centers over the lack of drinking water or the power shortages, there have been a lot of rumors about the export of Iranian water and electricity to neighboring countries. But the energy minister has denied such claims, while saying Iran has the general capacity to export 1,300 MW of electricity to various countries, including Iraq, Pakistan and Afghanistan. He said that due to the current situation, Iran is importing about 700 MW of electricity from Turkmenistan, Azerbaijan and Afghanistan.

While Iran’s current nominal electricity production capacity is 78,726 MW, of which 81% comes from thermal plants and about 15% from hydropower plants, the country has in recent years increased investments in renewable energy. While it currently has less than a 1% percent share of total electricity generation, renewable energy is an alternative way to generate cleaner, cheaper and more sustainable power. The capacity of Iran's reusable energy, which was 527 MW last year, is planned to reach 1,000 MW by the end of the current Iranian year (ending March 20, 2019) and 4,000 MW by the year after.

Despite all the measures taken over the past week or so, it remains to be seen how often and long the power cuts will be in major cities such as Tehran, as the hottest days of summers in Iran are yet to come.