A landmark bill to expand the legal definition of violence against women remains stalled amid objections from the Iranian judiciary. 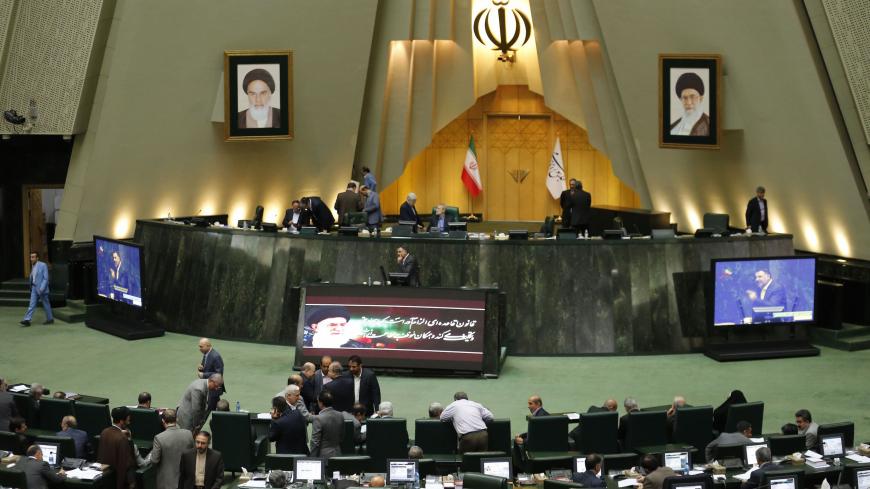 Legislators, including a woman in the front row to the far right, are seen during a meeting of the Iranian parliament on March 13, 2018. The parliament is awaiting receipt of a vetted bill regarding violence against women from the Iranian judiciary. - GETTY/Atta Kenare

“Ever since we started our term, we have been waiting for this bill," said Iranian parliamentarian Tayyebeh Siavoshi of the Provision of Security for Women Bill, which expands the legal definition of violence against women. "Both we and the Vice Presidency for Women and Family Affairs have repeatedly asked the judiciary to send this bill to the parliament. It has been almost three years and we have yet to receive this bill.”

Iranian parliamentarians originally discussed the importance of drafting this bill back in December 2012, during President Mahmoud Ahmadinejad’s last year in office. After President Hassan Rouhani took office in August 2013, following up on this bill became a priority of the Vice Presidency for Women and Family Affairs.

The Rouhani administration eventually approved the bill in May 2017. Then, due to its judicial nature, the bill was sent to the judiciary for approval. Since then, the bill has been awaiting the signature of judiciary head Sadeq Amoli Larijani.

Now, Siavoshi says the judiciary has omitted 41 of the 92 articles of the bill. According to her, the judiciary finished reviewing the bill four months ago.

An Iranian women’s rights activist, going by the alias Leili, told Al-Monitor, “The bill contains extensive definitions of violence: physical violence, mental violence, economic violence, gender violence and social violence. For example, if a man restricts his wife’s or daughter’s freedom of movement, he will face imprisonment. Even verbal violence, such as insults, are deemed punishable offenses.”

Leili added, “Such articles in the bill have been criticized and are being omitted since they question the validity of Islamic law regarding women obeying their husbands. The judiciary has reservations regarding this bill.”

The same activist believes that omitting these articles will make the bill ineffective, even if it is approved. “It appears that the text of the bill awaiting approval differs from the one that was suggested by the Vice Presidency for Women and Family Affairs," said Leili. "The text of this bill now only talks about physical violence against women, an offense which is already punishable due to the scattered nature of criminal law in Iran.”

The judiciary’s deputy for legal affairs, Zabihollah Khodaian, said in an April 18 interview with the Tasnim News Agency that “vast criminalization” is the reason why certain articles were omitted from this bill. He then explained, “Some articles in this bill have come up, on average, with 20 new crimes, and since the terminology and wording are ambiguous and can be interpreted in many different ways, they cover a wide range of cases.”

The judiciary’s cultural deputy, Hadi Sadeghi, said June 27 that there is extensive usage of imprisonment as punishment in the bill. He said that while the bill claims to support women, “in reality it deals a big blow to women and family life. When a woman sends her husband to jail, the husband will no longer think of himself as her husband and will no doubt divorce her.”

Zahra Jafari, a legal expert working for the Iranian judiciary, said four groups of experts have worked for four years to prepare the bill.

It has come under criticism from other women. Zahra Ayatollahi, head of the Women’s Cultural and Social Council — a branch of the Supreme Council of the Cultural Revolution — said the bill “defends prostitutes.” Ayatollahi said in a December 2017 editorial in the hard-line Kayhan daily that “this bill is clearly gender-biased and unconditionally defends women. It does not at all address the existence of violence by women against men. … Imagine where our society is headed: Islamic Iran is headed for the same gutter that the West has found itself in.”

Member of parliament Parvaneh Salahshouri said the bill might be sent to Iran’s supreme leader, Ayatollah Ali Khamenei, even though the women’s faction in parliament and the vice president for legal affairs are waiting for the judiciary to make a decision on the proposal. “We have heard [of such a possibility] … but we cannot be sure," she told Etemad Online on July 3. "This would be an unprecedented action."

A week before Salahshouri’s interview, Khamenei's website published the text of a conversation between the head of the judiciary, other judiciary officials and the supreme leader, during which the latter said that following the 1979 Islamic Revolution, "One of the students asked me about women’s issues and asked me how we would defend our position regarding women. I answered that we are not defending anything! We are not defenders, we are attackers! What is there to defend? When it comes to women’s issues, we are the plaintiff!”

Vice President for Women’s and Family Affairs Masoumeh Ebtekar spoke with the Etemad daily July 7 regarding the possibility that the bill will not advance due to opposition from Islamic jurists. “One of the issues that we talked about during the session we had with the supreme leader was the issue of domestic violence, the importance of paying attention to it, and the importance of drafting law that would prevent domestic violence from taking place," she said. "The supreme leader also emphasized the importance of this issue.”

Ebtekar said she has only “heard” that the bill might be sent to Khamenei. “We, nonetheless, expect answers from the head of the judiciary," she said. "The administration is also waiting and is following up on this issue. All I hope is that we are not wasting time.”

What is next for the bill? Leili said fellow activists believe that, considering the current trajectory, “this bill might not make it under this term of the parliament.”

“On the other hand, we are hoping that the [parliamentary] women’s faction will strongly and seriously react to all the changes that are made to this bill. The judiciary should not be the only influential voice regarding this bill; civil society and those whose lives are going to be affected must have a say as well.”

Last year, on Nov. 25, the International Day for the Elimination of Violence against Women, a group of activists in Iran launched a campaign titled "Prohibiting Domestic Violence Against Women." This campaign is currently preparing a legal draft to combat domestic violence against women, with the collaboration of civil society activists and lawyers. Leili, who is a member of this campaign, told Al-Monitor, “We want to raise awareness in society so that people will learn how important it is to pass laws that will protect women. According to one survey that was conducted back in the 1980s, 66% of Iranian women have been, at least once, subjected to domestic violence. This is while there are no [current] laws that protect women against such incidents.”