Turkey's Recep Tayyip Erdogan has become the country's first executive president, and his first order of business seems to be building global legitimacy for himself and his "New Turkey." 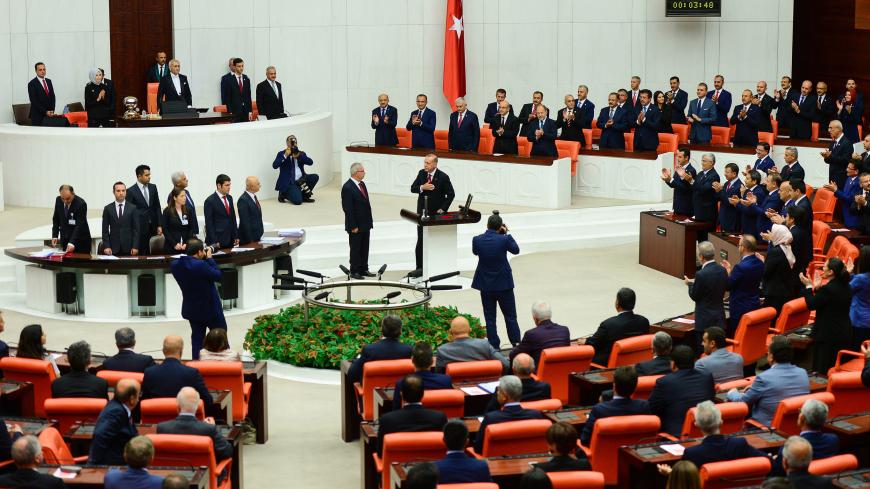 Recep Tayyip Erdogan was sworn in as Turkey’s first executive president with sweeping powers at a ceremony in the Turkish parliament July 9, marking the official start of what his followers call the “New Turkey.” Members of his ruling Justice and Development Party (AKP) applauded wildly and erupted into cheers as a slightly hunched Erdogan, wearing a tight smile and a cherry-colored tie, took the oath of office. The 64-year-old leader then lustily belted out Turkey’s national anthem along with the audience before being whisked off in a black sedan decked with roses to Anitkabir, Mustafa Kemal Ataturk’s mausoleum, to pay his respects to modern Turkey’s first president.

Some 22 heads of state and scores of other international dignitaries showed up for the celebrations, which continued in the sprawling presidential palace Erdogan erected for himself on the outskirts of the capital. The constellation of global guests mirrored the New Turkey’s shifting alliances, with Venezuelan strongman Nicolas Maduro, Sudanese President Omar al-Bashir and Qatari Emir Sheikh Tamim bin Hamad Al Thani taking center stage alongside Russian Prime Minister Dmitry Medvedev. The United States, which has not had an ambassador in Turkey since last October, was represented by its charge d’affaires in Ankara.

The newly vested Erdogan will make his first foreign trip on Wednesday to a NATO summit in Brussels, where he is expected to hold talks with US President Donald Trump and other Western leaders. The West seems less worried about Turkey’s authoritarian turn than maintaining a prized strategic ally’s loyalty in the face of Erdogan’s overt flirtation with Russia, which has seen the impending acquisition of S-400 missiles and an expanding web of gas and oil deals. The US ambassador to NATO aired the bloc’s concerns on July 9. Kay Bailey Hutchison said, “I do think Russia is trying to flip Turkey.”

For Europe, Turkey is a critical buffer between the continent and millions of Syrian and other refugees who want to get there, not to mention a growing number of jihadis said to be slipping in from northwestern Syria’s rebel-held Idlib. Despite friction over US support for Syrian Kurdish militants and the detention of US nationals in Turkey — some US lawmakers call them political hostages — and repeated threats of US sanctions, “It's business as usual,” affirmed a Western diplomat, speaking on condition of strict anonymity to Al-Monitor.

For all his defiant rhetoric, Erdogan is hungry for global legitimacy, and in his inaugural speech he vowed, “In the new era, Turkey will further advance in all areas, including democracy, fundamental rights and freedoms and economy." Indeed, commentators on Turkey’s state television channel TRT were at pains to explain that the new model, which allows the president to issue executive decrees and to appoint and sack senior judges, Cabinet ministers and other senior officials without the parliament’s assent, would make the country more stable and democratic. “The tyranny of bureaucracy is over,” intoned one.

With tens of thousands of bureaucrats, policemen, army officers and others purged since the failed July 2016 coup, one may well ask if there are enough remaining to block the system as the commentator claimed.

Critics say with the media shackled, the opposition — including the Kurds — squashed, and academia and civil society unremittingly intimidated, there are no checks and balances and Turkey is now formally under one-man rule. Change is increasingly less likely to come through free and fair presidential elections due in five years than by Erdogan anointing a successor — or worse, violence. But the immediate concern is over Turkey’s wobbly economy and whether Erdogan will continue to bully the Central Bank to keep interest rates down and cling to contracting as the main engine of growth. All eyes are on the new Cabinet Erdogan was expected to unveil as Al-Monitor went to press, but in the end, whomever he picks, it is Erdogan who will call all the shots.

To many, the super presidency, which was ushered in after fraud-marred elections on June 24, won’t feel that different. Erdogan has held uninterrupted power, much of it as prime minister, for nearly 16 years — making him Turkey’s longest serving leader. For the estimated 20 million or so Turkish citizens born after the AKP rose to power, Erdogan will more likely be measured against his own record than that of his opponents unless they win any of the big municipalities that are set to be contested in nationwide local elections next March. Besides, he has governed with the emergency powers since the botched coup. Critics charge that with the AKP retaining its parliamentary majority with the support of its nationalist partners, little will change.

Their gloom was unsubstantiated in Erdogan’s early days when he championed dramatic reforms, paving the way to now frozen membership talks with the European Union.

Nicholas Danforth, a historian and senior policy analyst for the Bipartisan Policy Center’s national security program, suggested, however, that real change in Turkey may have been illusory all along. “Almost a century on, historians have argued that the revolutionary rhetoric surrounding the creation of the Turkish republic masked many deeper continuities with the Ottoman state that preceded it,” Danforth told Al-Monitor. “In a similar way, Erdogan’s New Turkey may ultimately prove less new than his rhetoric suggests. So far, though, the continuities appear to be for the worse, with Erdogan using the nationalism, paranoia and authoritarian structure he inherited from the old regime to build a new, more fragile and ideological edifice.”

In an ominous sign that the formally empowered Erdogan will not prove any more benign, a further 18,632 public servants were summarily dismissed July 8 on grounds of national security. Nearly half were police officers accused of links to Fethullah Gulen, the Pennsylvania-based Sunni cleric who is accused of masterminding the botched coup.

The media will apparently not breathe any freer either. Citing national security, the government slapped a reporting ban on a train accident that killed at least 24 people on July 8. At least 120 others were injured in the accident, which occurred when six of the train's carriages derailed in the northwestern province of Tekirdag. Turkish officials said heavy rain had caused the earth under the tracks to collapse, but the opposition charged a lack of safety enforcement was to blame.