Experts are doubting the effectiveness of green bonds in Egypt, as the economic situation is staggering and awareness about the importance of sustainable and eco-friendly projects is rare in the country. 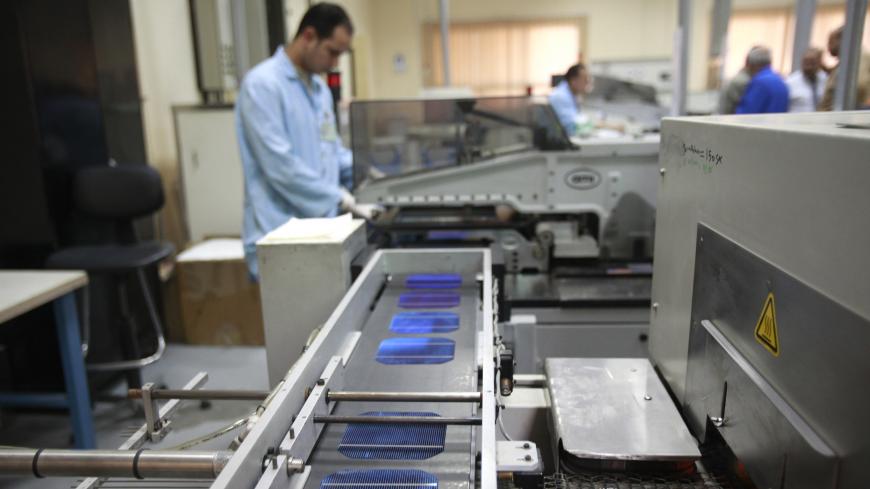 An employee is seen on the production line of the solar energy department at the Arab International Optronics factory on the outskirts of Cairo, Nov. 17, 2011. - REUTERS/Asmaa Waguih

Egypt’s financial regulator approved on July 18 a legal framework for issuing green bonds, with the aim of providing financial tools to fund eco-friendly projects in the fields of new and renewable energy, construction and transport.

“[We] will unveil regulations and measures necessary for the issuance of green bonds in accordance with the best international applications, as part of a partnership with the International Financial Corporation [IFC] and in tandem with the principles of issuing green bonds released by the International Capital Market Association,” said Mohammed Omran, head of the Egyptian Financial Supervisory Authority, according to local media.

Omran said the most important measures are identifying the concept and types of green bonds, the fields of using them in financing eco-friendly projects, and the bodies that can issue green bonds as well as the requirements of their issuance. “The regulations also include measures to assess and choose eco-friendly projects, the compliance of such projects with clean environment requirements, disclosure to investors and periodical statements,” he added.

According to the IFC, green bonds “generate financing for projects in renewable energy, energy efficiency, sustainable housing and other eco-friendly industries.”

The international organization also said that the green bond market has exponentially grown in the past decade, adding that annual issuance has increased from zero to more than $155 billion globally, with more growth ahead.

“Over the course of just one year — 2017 — new green-bond issuance grew by 78% to more than $155 billion worldwide,” the IFC added. The Climate Bonds Initiative, an international nonprofit organization, said that number is forecast to reach $250 billion by the end of 2018.

Ahmed Koura, a veteran banker and former president of Al-Watany Bank of Egypt, said the green bond market is growing because the issue of climate change is becoming one of the key challenges facing the world and due to a growing trend to invest in green projects.

“Governments, companies and institutions are noticeably tending to issue green bonds to fund projects that can be sustainable, competitive and better for their communities,” Koura told Al-Monitor. “I think that the decision to issue green bonds in Egypt is very smart and timely because it goes in line with a global tendency toward green projects,” he added.

However, Ahmed el-Shami, an economist and professor of feasibility studies at Cairo University, said a green bond is an instrument of indebtedness of the state to potential investors. “At this time I am against any kind of accumulating debts for the state because the state is already struggling with swallowing internal and external debts. I believe that the government has to focus more on attracting foreign direct investments instead of issuing bonds, which are tools of indebtedness,” he told Al-Monitor.

Shami said the green bonds would not produce the desired revenues in Egypt because the market is still new in emerging countries. “The green bonds are successful in developed countries, but they have not yet been tapped in a significant way in developing countries. Egypt has potential in green projects but still has a long way to go,” he added.

The Egyptian government has taken a raft of measures to expand its funding sources with a view to giving a push to the state's finances, reducing the budget deficit and shoring up a staggering economy.

On July 16, the parliament approved a draft law to establish a sovereign fund aimed at making the best use of state assets with a capital of 5 billion Egyptian pounds (about $285 million).

According to the draft law, the Egypt Fund will be managed by the Ministry of Planning along with a host of other ministries concerned with the aim of using state assets to implement several infrastructure projects, create more job opportunities and reduce the budget deficit. The law and government officials have not, however, announced yet when the fund will be launched and begin operating.

Egypt’s Ministry of Finance also said it would float shares in state-owned companies this year in an effort to boost public assets and draw more local and foreign investors to a growing Egyptian stock market.

Fathallah Fawzi, an investor and a real estate developer, said green bonds are not likely to be successful in Egypt because most green projects in the country do not conform to international standards and are not certified.

“I think that issuing such green bonds for the time being in Egypt will not be beneficial amid a suffering national economy and a general perception among investors that the costs of green projects are higher than those of traditional costs. These bonds can make headway only in developed countries,” he told Al-Monitor.

Fawzi suggested that the government issue green bonds when the economy recovers and when more awareness about sustainable and green projects has taken place in the country. “That would be perfect timing because the implementation of the projects would be done according to international standards,” he added.