Unemployment and isolation are some of the biggest problems facing Iran's disabled population, and a cafe run by a staff with autism and Down syndrome is just what its employees needed. 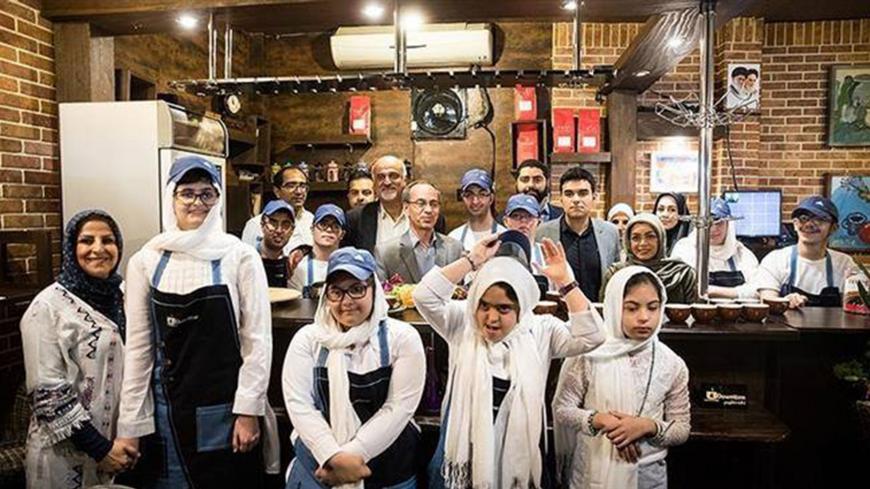 The staff of the Downtism cafe in Tehran, Iran, seen in an image uploaded May 3, 2018. - Facebook/Syria Truths

With tables squeezed together, framed paintings on the walls and a one-page menu that offers a selection of coffees, Downtism cafe in northern Tehran looks like any other coffee shop. It's unique, though: Downtism is the first and only cafe in Iran where all the employees have Down syndrome or autism.

“I really like my job. It feels good to be out of home with friends and make real money,” Arya, a 21-year-old with autism, told Al-Monitor.

His mother, who identified herself as Mrs. Azad, said she was equally pleased with her son’s job as a dishwasher. She told Al-Monitor, “We’re very happy and satisfied that they’re working. This way they can both work and socialize with others. They develop social skills and self-confidence.” She and other parents take turns lending a hand at the cafe and overseeing how their children are doing.

Downtism, which opened May 1, has quickly made a name for itself. When Al-Monitor visited the coffee shop after Ramadan, all the tables were filled.

A smiling young boy or girl greets customers and hands out a colorful menu that offers espresso, lattes or cold drinks made with traditional flavors like saffron. The colorful drawings on the walls are the works of the 35 employees, most of them in their 20s. There are often lines for the coffee, Mrs. Azad told Al-Monitor.

Behind the cafe's success stands Aileen Gerami, a music instructor who came up with the idea three years ago. This year she finally managed to obtain the support of the State Welfare Organization, which gave her the venue.

“I have been holding music concerts with disabled people in different cities for the past 17 years,” Gerami was quoted by Sharaq Daily as saying. “But I always felt that was not enough for them. They were with other people for a short time, and after that they were alone again.”

Mohammad Reza Asadi, deputy director for rehabilitation at the State Welfare Organization, was quoted by local media on May 1 as saying that the cafe is the first in the Middle East to be entirely run by people with Down syndrome and autism. “There are 4,000 families affected by autism in Tehran,” he said. “This cafe will provide hope for them.”

The cafe provides an employment niche for Iran's disabled population, which faces many obstacles in daily life.

“City structures are not suitable for the disabled to let them move freely. This also restricts the disabled presence in workplaces, even if a company is willing to hire them," Vahid Rajabloo, a 30-year-old who has a rare genetic disorder called spinal muscular atrophy, told Al-Monitor.

Rajabloo never got a chance to go to school due to his physical disability, but he taught himself programming and eventually became economically self-sufficient. Believing that access to education and services is key for professional success, he has established a directory of services offered for the disabled called Tavanito.

“My startup has different sections. Part of it introduces markets to companies while encouraging them to employ the disabled. It also facilitates access to different services, from dental care to hairdressing and buying devices such as wheelchairs or walkers they need to use. The startup also has a section to train the public on how to treat the disabled and their families,” he told Al-Monitor.

But measures like the cafe and his startup are small steps compared to the enormity of problems Iran’s handicapped face. The ball rests in the court of the government, both for employment and for social aid.

At a conference held on the International Day of Disabled Persons last December, Minister of Cooperatives, Labor and Social Welfare Ali Rabiee briefed nongovernmental organizations about the measures the government has taken in that field, including offering professional training to the disabled and low-interest loans.

The government is hopeful that the new Comprehensive Law Supporting the Rights of the Disabled will soon resolve many of their problems. The much anticipated law was passed in March, and a month later, President Hassan Rouhani called for its immediate implementation. The law calls for upgrading city structures to facilitate the movement of the disabled and granting them insurance for medical and rehabilitation services as well as sports, educational and cultural services. It also aims to create jobs and housing for them.

In Iran, disabilities are classified into four categories, based on severity: low, average, severe and very severe. While official figures put the number of Iranians with severe disabilities at 1.5 million, there is no official statistics available about the other groups, making it nearly impossible to determine the employment rates among them. Experts agree that the absence of such data also hampers rehabilitation services to the disabled. Therefore, they say, the government must first gather statistics on the number of Iran's disabled people.

Asked about the importance of places like Downtism cafe, Mrs. Azad said, “It’s very crucial for them since those who come here have the understanding to respect the kids and accept their work even if they’re not done perfectly like in regular cafes. These are the only places where we as their families have peace of mind, since nobody makes fun of our kids or abuses them.”