Lawmakers who have long championed the fledgling democracy are worried about potential efforts to rein in civil society. 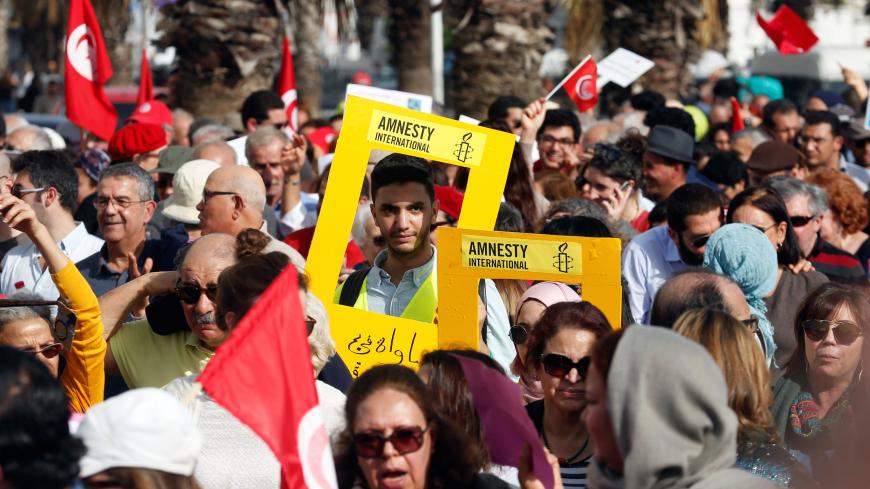 While US lawmakers have been among Tunisia’s most enthusiastic cheerleaders since the 2011 Jasmine Revolution, a proposed Tunisian law to more tightly regulate nongovernmental organizations has prompted Congress to issue a rare rebuke against the Arab world’s newest democracy.

Senate appropriators are demanding a report on the Tunisian government’s efforts to pass a bill that would supplant existing NGO regulations and potentially give the government more control over civil society. Buried in the report accompanying the annual Senate foreign assistance bill is language directing the State Department to provide Congress with an assessment of “the content of the proposed NGO law for Tunisia and its implications on the ability of USAID [the US Agency for International Development] and the Department of State to support Tunisian civil society organizations.”

The Senate foreign aid spending panel moved the bill to the full chamber last month. The State Department’s assessment is due 45 days after the bill becomes law.

“It’s another message from Congress to the Tunisian government that while the US remains supportive of Tunisia financially and politically, there are some things that are taking place with this potential revision which could force the US government to re-evaluate its position,” said Andrew Miller, the deputy director for policy at the Project on Middle East Democracy (POMED). The group has an office in Tunisia and opposes the revision.

Tunisian authorities have yet to release a public draft of the bill, but Tunisian civil society advocates are already sounding the alarm based on their discussions with the government of Prime Minister Youssef Chahed. The proposal would replace Decree 88, a post-revolution executive action that Tunisia’s transitional government passed in 2011.

The International Center for Nonprofit Law in Washington said that Decree 88 “provides protections for the exercise of freedom of association and support for a free and independent civil society sector, including provisions for public funding and prohibitions on state interference in organizations’ operations.” POMED, for its part, said the decree has allowed Tunisia to enjoy “the most progressive and democratic legal framework for civil society in the Arab world.”

“Despite some of the weaknesses and dysfunction in the Tunisian political system, what has kept the transition on track is the enthusiastic public and their ability to mobilize at key points where things seem to be going in the wrong direction or there are major concerns,” said Miller. “So that has essentially served as a safety net that has prevented backtracking.”

The Chahed government also insists it will not use any new law as a pretext to crack down on civil society. The Tunisian Embassy in Washington did not respond to a request for comment.

NGO advocates aren’t buying it. They say Tunisia simply needs to better enforce the laws and regulations that it already has on the books.

“Under the existing law, there are very few obstacles to international civil society organizations operating in Tunisia, either in terms of registration or in terms of potential penalties,” said Miller. “The concern is that under the new NGO law, either they could change the registration process … or theoretically they could contemplate prison sentences for violation of the law.”

The Donald Trump administration appears to share some of the concerns echoed by the Senate and civil society advocates. In order to minimize some of the more drastic consequences of the proposed law, the US Embassy in Tunisia has provided funding to the NGO Democracy International with the goal of fostering greater civil society input for any new law.

“The motivation behind offering this grant for Democracy International is so that they can hopefully prevent any modification to the NGO law from severely abridging associational freedoms or providing problems for other international groups providing money to implement programming,” said Miller. “Based on what we’ve been hearing recently, the program is having the intended effect, at least at some level.”

However, an annual report from POMED assessing the State Department’s 2019 budget request said Tunisian NGOs are suspicious of the Donald Trump administration’s true intentions because of the embassy’s “reported failure to consult with local stakeholders prior to announcing the program.”

by Murielle KASPRZAK and Joseph SCHMID | AFP | May 26, 2022
END_OF_DOCUMENT_TOKEN_TO_BE_REPLACED