Congress seeks to lift last restrictions on aid to Egypt

The US House foreign aid bill eliminates previous requirements that Egypt hold "free and fair" parliamentary elections and take steps to foster democracy and protect human rights before $1.3 billion in military aid can be released. 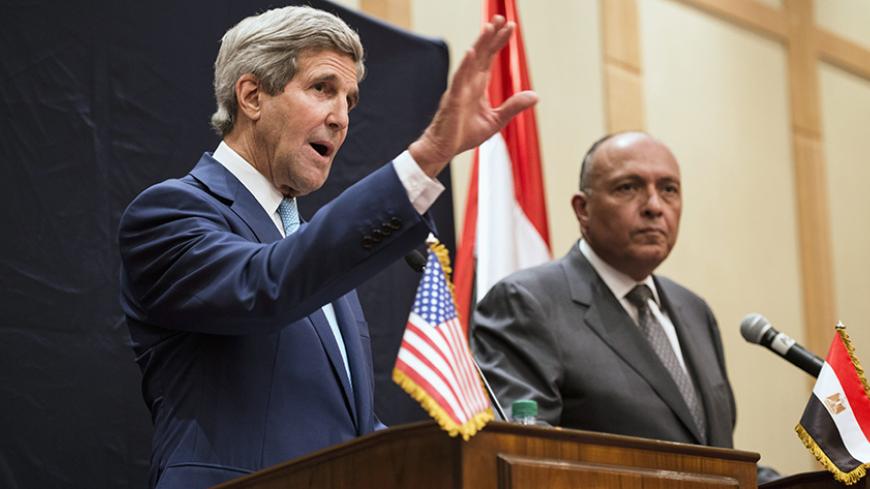 WASHINGTON — Purse-string holders in the US House released a foreign aid bill June 2 that removes human rights restrictions on assistance to Egypt, the latest sign that the United States is casting its lot with President Abdel Fattah al-Sisi despite lingering concerns.

The proposed appropriations bill eliminates previous requirements that Egypt hold "free and fair" parliamentary elections and take steps to foster democracy and protect human rights before $1.3 billion in military aid can be released. Doing so would in effect revert US bilateral assistance to the way it was under strongman Hosni Mubarak, with Egypt only required to sustain its strategic relationship with the United States and uphold its peace treaty with Israel.

"What we want to do with Egypt is return to the way it was," said State and Foreign Operations panel Chairwoman Kay Granger, R-Texas. "We felt that [Egypt was] trying [to instill democracy] with Sisi and was keeping other agreements that were in our national security interests."

The bill comes as the State Department has informed Congress that it cannot certify Egypt's democratic progress under the existing law. In a blistering assessment sent to Congress on May 12 and obtained by Al-Monitor, the State Department bemoans a "pervasive lack of respect for international due process standards and other fair trial safeguards."

"While Egypt has implemented parts of its 'democracy roadmap,' the overall trajectory of rights and democracy has been negative," states the report to the Appropriations committees in the House and Senate. "A series of executive initiatives, new laws, and judicial actions severely restrict freedom of expression and the press, freedom of association, freedom of peaceful assembly, and due process, and they undermine prospects for democratic governance."

The State Department report goes on to state that "impunity remains a serious problem in Egypt." The Egyptian Embassy here did not respond to a request for comment. "Government forces have committed arbitrary or otherwise unlawful killings during dispersal of demonstrators, of persons in custody, and during military operations in the northern Sinai Peninsula," the report says.

Still, the proposed changes appear to have bipartisan appeal. The subcommittee is scheduled to mark up the bill June 3.

"If you have an ally you work with them. You don't tear them down, you build them up," panel member Dutch Ruppersberger, D-Md., told Al-Monitor. "If we walk away, do you want China, Russia to move in and take them over? That's kind of the things you have to look at."

The draft bill marks the culmination of a gradual weakening of restrictions on aid to Egypt since the removal of President Mohammed Morsi in 2013.

The foreign aid bill for 2013-14 required that US Secretary of State John Kerry certify that Egypt had taken steps to support a democratic transition and govern democratically, conditions that couldn't be met. Last year, Congress kept many of those conditions in place but gave the Obama administration a national security waiver authority to bypass those certification requirements; the State Department made use of that authority March 12.

"Basically this [new] bill acknowledges that it will not be possible for the US administration to certify that the government of Egypt is continuing a democratic transition or respecting human rights — because it is not — but at the same time the [US government] is not willing to withhold security assistance for those reasons," said Michele Dunne of the Carnegie Endowment for International Peace's Middle East program.

Instead, the new bill calls on the State Department to report every 90 days on steps Egypt has taken to "hold parliamentary elections; protect and advance the rights of women and religious minorities; implement laws or policies to govern democratically, protect the rights of individuals, and uphold due process of law; implement reforms that protect freedoms of expression, association, and peaceful assembly, including the ability of civil society organizations and the media to function without interference; and improve the transparency and accountability of security forces." The bill allows those reports to be classified, further raising concerns among human rights advocates.

The certifications "are gone, replaced by a report that oddly can be submitted in classified fashion," said Amy Hawthorne of the Atlantic Council. "Overall this is of course a weakening."

Besides the military aid, the bill sets aside another $150 million in Economic Support Funds that "may be made available for democracy programs."

Human rights advocates pointed to other changes in the bill that have them concerned. In particular, the new bill no longer requires "free and fair" elections and also drops the demand for "credible investigations and prosecutions of the use of excessive force" by security forces, said Project on Middle East Democracy Advocacy Director Cole Bockenfeld, replacing it with weaker language requiring a report on steps taken to "improve the transparency and accountability of security forces."

Finally, the new bill would no longer require that Egypt release "American citizens who the secretary of state determines to be political prisoners and [dismiss] charges against them." The May 12 memo to the appropriators suggests that three "dual nationals whose cases potentially have political overtones" remain jailed in Egypt following the release May 30 of Mohamed Soltan.