How US-Turkey deal in Manbij could affect Russia's influence

Turkish patrols escorted by US Army helicopters not far from Manbij, Syria, indicate power equations that have favored Russia in northwest Syria could rapidly change. 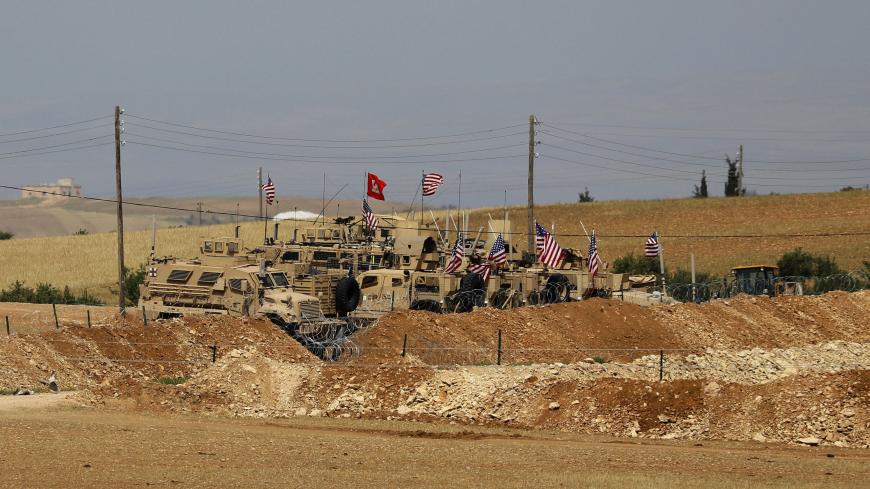 Vehicles of the US-backed coalition forces are grouped together, Manbij, Syria, May 8, 2018. - DELIL SOULEIMAN/AFP/Getty Images

When analyzing field indicators, it's easy to understand why Russia is the dominant force in northwest Syria both on the ground and in the air. Efforts led by Russia, with Iran and Turkey, to create a de-escalation zone around Idlib over the past year and a half have succeeded, despite minor differences of opinion.

That this patrol was supported by US Army helicopters was a totally new element. Although both the Turkish General Staff and the US military described the activity as "coordinated yet independent," it was obvious that this symbolic patrolling was a joint US-Turkish military effort, both in its planning and its execution.

Now there are two competing military activities occurring simultaneously in northwest Syria. One is the de-escalation effort by the Russia-Turkey-Iran bloc intensifying around Idlib, and the other is the US-Turkey deconfliction efforts focusing on Manbij.

After seeing the Turkish military patrolling under the cover of US helicopters, the very first question to be asked was, since there's no credible evidence of an Islamic State (IS) presence in Manbij, what exactly is the "threat" that the Turkish and US military are patrolling against? What enemy seems to have brought the United States and Turkey together in Manbij?

A small piece of turf of some 30-40 kilometers (18-24 miles) around Manbij has thus become the all-important point of the US-versus-Russia power struggle in northern Syria. As such, Manbij is truly a diplomatic minefield for both the United States and Turkey.

After the first Turkish patrol, Operation Inherent Resolve (OIR) spokesman Col. Sean Ryan said, “I can tell you that Turkish soldiers will not go into Manbij. Manbij Military Council [MMC] is in control of all the area, and so this [patrolling] will just be basically along the northern demarcation line.” OIR is the US military's name for its intervention against IS in Iraq and Syria.

As Ryan emphasized, the patrolling lasted only two hours and did not extend to Manbij proper. However, Turkey believes that the MMC is a cover for YPG forces and that the YPG remains in control in Manbij. The MMC has threatened to resist if the Turkish military-backed FSA forces do dare to enter the city.

But from the statements made so far, it appears the patrolling along Sajur River will not expand toward Manbij town. The sensitive issue to be handled now will be the restructuring of the MMC. This could well again cause tensions between the United States and Turkey.

Also, one has to take into account the dissent between Ankara and the US Central Command (CENTCOM), which is running OIR. Negotiations between the United States and Turkey weren't carried out with CENTCOM, but with the US European Command (EUCOM), which has smoother relations with Turkey. Final details of the patrol planning were formulated at the Stuttgart base of EUCOM headquarters in Germany, with the participation of Turkish and US officers.

From the frequent phone calls between Turkish Chief of General Staff Gen. Hulusi Akar and EUCOM Gen. Curtis Scaparrotti, one can also note that Turkey has designated EUCOM as its key interlocutor regarding Manbij.

I must add here that this is the first time in more than a year that I have seen US helicopters flying over Manbij.

Now, about a possibility that would anger Moscow and Tehran: Shall we soon also see US helicopters flying over the Turkish-held triangle of Jarablus, al-Rai and al-Bab? That would indicate that US-Turkish cooperation in northwest Syria has deepened.

Observers should now focus more on the power struggle to control airspace rather than the ground. In northern Syria, guns on the ground may be no more important than which aircraft of what country flew over where and which proxies are acquiring air defense capabilities.