Polls show Erdogan ahead, but should Turks trust them?

Researchers have been publishing a slew of polls showing Turkish President Recep Tayyip Erdogan leading in his re-election bid, but a lack of transparency in methodology and funding mean the results are far from reliable. 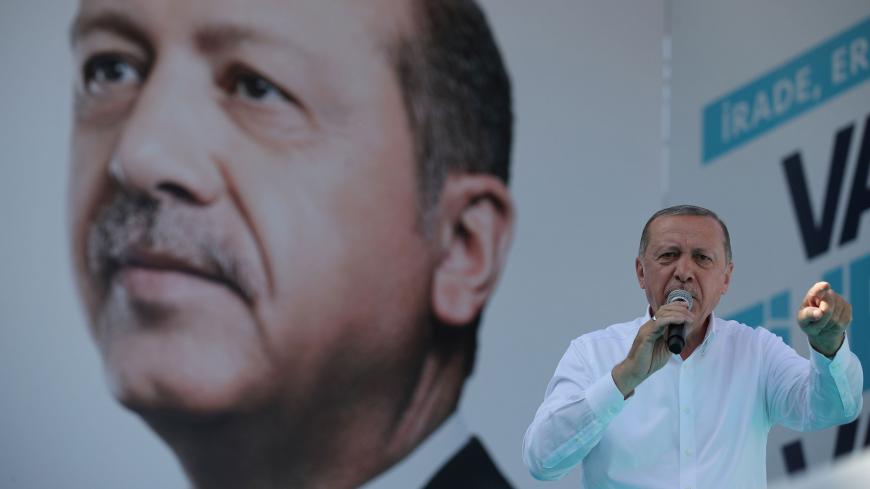 Turkey has entered the final stretch of a historic election campaign and public opinion polls are giving President Recep Tayyip Erdogan a clear lead in his re-election bid. Yet a lack of confidence surrounding opinion research in Turkish politics may be skewing results ahead of an election that may be too close to call.

Electoral rules restrict polling in the final 10 days of a campaign to prevent such research from swaying voters, and pollsters have rushed to release data, with a handful putting Erdogan’s share of the vote above 50% — the percentage needed to win in a first-round of voting on June 24. If he falls short of half of the vote, a runoff between the top two candidates will be held on July 8.

Politicians, journalists, investors and political analysts are closely tracking the data despite most polls' failure to accurately predict outcomes in recent Turkish elections. Polling data released in the the final 10 days must include details about the organization conducting the research, the number of subjects and who is financing the research.

Turkish election polling is “wholly unreliable," said Michael Daventry, a journalist who runs the James in Turkey blog that closely monitors Turkish electoral politics. "There is no Turkish pollster who publishes public data that is reliable, because they don’t share how they gathered the data and they don’t reveal who paid for the research. Those are the two main things you would expect from any pollster.”

Daventry pointed to a tradition among research firms to favor one party over the other, telling Al-Monitor, “Polls in Turkey are used for political ends to further a political narrative.”

One transparent exception came on Wednesday, when Bloomberg News released a poll it commissioned from Foresight Danismanlik that showed Erdogan winning outright on June 24 with 50.8% support. It said he could still face an upset because his razor-thin lead fell within the 3.5% margin of error in the survey of 500 people conducted between June 7 and June 11.

A poll of 5,500 people released last week by MAK Arastirma, which is seen as close to the government, showed Erdogan with 51.5% of the vote. Other surveys predict Erdogan will have to wait two more weeks to become president again, with his support ranging between 43.5% and 48% in the first round, in which he is competing against five other presidential hopefuls.

The election is Turkey’s most significant in at least a generation, ushering in constitutional changes Erdogan won in a contentious referendum last year that will greatly expand the powers of his office. Turks will also cast ballots in a concurrent parliamentary poll.

The elections are also occurring during the emergency rule that Erdogan imposed in the wake of a 2016 coup that failed to topple him. Tens of thousands of people have been jailed — including Selahattin Demirtas, one of Erdogan’s presidential competitors, whose support hovers around 10%. Dozens of media outlets have been outlawed, raising questions from observers including the Council of Europe about how free and fair the vote can be.

“Polling in a restricted media environment is really problematic. Public opinion is shaped primarily by television. If what people see on the TV news only communicates one point of view, it’s inevitable that views expressed in polls will reflect that point of view,” said Christine Quirk, principal at Quirk Global Strategies, a research consultancy that specializes in measuring public opinion in difficult environments. “This is the primary factor that makes me skeptical of public opinion polling in Turkey around election time.”

Pollsters must ensure that every likely voter has an equal chance of participating in the survey to ensure a truly random sample. Researchers also require information on how people voted previously and their demographic and geographic details. And they need a mathematical model to compare results with past patterns.

“It’s not rocket science,” Quirk told Al-Monitor. “Many of the problems with election polling in Turkey could be solved with more transparency and more critical reporting by journalists. ‘Did this pollster’s poll accurately predict the election?’ is the wrong question — a stopped clock is right twice a day. A better question is, ‘Did this pollster use a methodology that accurately measured the views of Turkish voters on the day the poll was taken?’

“The only way the public will know the answer to that question is if pollsters release important details like sample size, sampling methodology, data collection methodology, the dates the data were collected and, most importantly, who paid for the poll,” she said.

For all their flaws, the consensus that has emerged is that it's a question of when, not if, Erdogan wins the vote. He consistently ranks above 50% when voters are questioned about who they would choose in a two-person race.

Muharrem Ince, the candidate for the main opposition Republican People’s Party (CHP), has staged round-the-clock campaign events in nearly all of Turkey’s provinces, pledging to hold a total of 106 rallies in the 50 days he has to campaign. The combative former schoolteacher has lit up social media with his sharp rebukes of Erdogan and reportedly beat him in television ratings.

Ince scored 31.4% in a poll of 3,000 people conducted between May 29 and June 3 by Sonar Arastirma, gaining 10 percentage points within two weeks. “This is the highest share of the vote that the CHP has achieved since [late Prime Minister] Bulent Ecevit in 1977,” it said.

Opposition media figures were quick to report that Sonar’s Chairman Hakan Bayrakci was briefly detained following the results of the poll, even though the pollster tweeted he was taken into custody after he was caught lighting a cigarette in an airplane lavatory during a domestic flight.

In the end, opinion polling, trusted or not, will have little impact on voter preferences, said Quirk.

“Polls shaping public opinion, like strategic voting, is one of those things that opinion leaders love to think happens but usually doesn’t. People vote their own self-interest. ‘How will this candidate or party help me educate my kid or get a better job?’ That’s what ultimately affects how most people decide how to vote, not what a poll says,” she said.