The Turkish president’s election pledge for free coffeehouses has earned him much ridicule ahead of the June 24 polls, but some warn the project is no laughing matter. 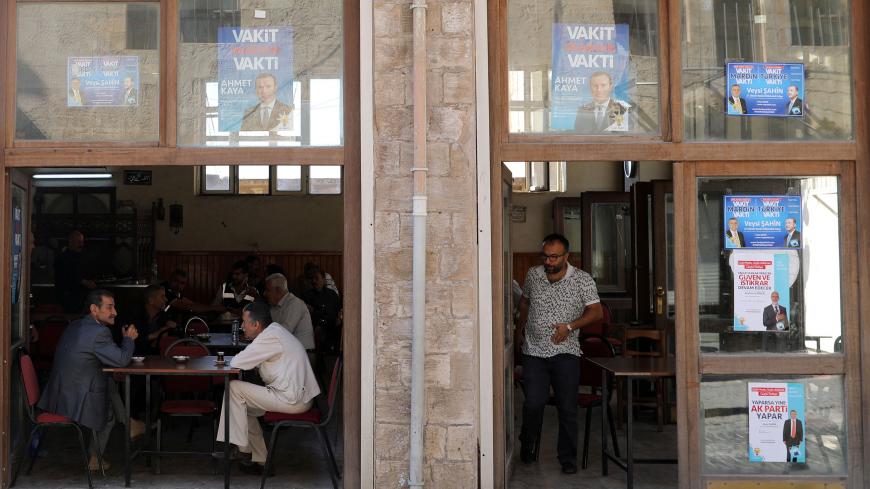 During an election rally June 7, Turkish President Recep Tayyip Erdogan pledged a new public service that astounded voters and journalists alike. Erdogan’s promise, which has earned him much ridicule from political opponents, was to open free coffeehouses across the country. “In the many elections I have followed over a quarter of a century, I have never heard such a pledge,” Hurriyet columnist Deniz Zeyrek wrote after the rally.

Unlike the trendy coffee shops in urban areas, cheap, traditional coffeehouses — a fixture in every neighborhood in Turkey — are frequented almost exclusively by men who spend time chatting, playing cards or watching television. They are usually associated with idleness and are often places jobless men go to kill time for cheap. And at a time when Turkey has more than 3 million jobless and is grappling with serious economic woes, Erdogan’s “nation’s coffeehouses” project gave the opposition easy ammunition to argue that the president has no viable solution to economic problems and is instead offering free tea and muffins to the jobless.

Yet Erdogan sought to explain that his coffeehouses would be equipped with libraries, stressing that the word for the traditional coffeehouses — "kiraathane" — meant “reading house” in its original sense, which has become obsolete today. And while the opposition may be eager to portray Erdogan as an exhausted leader with no real vision for the future, some observers say there is more to the project than meets the eye. Erdogan, they believe, might be planning another step to impose his conservative worldview on society.

Funda Cantek, a published scholar specializing in urban sociology, is among those who see ideological undertones in the project. In an interview with Al-Monitor, she stressed that coffeehouses were an important part of urban culture in Ottoman times, emerging as “an alternative space” to mosques in the 16th century.

According to centuries-old witness narratives, she said, coffeehouses were so popular in their heyday that “one could hardly find a place to stand, let alone sit.” Yet, she stressed, people were not only drinking coffee or tea and smoking hookah, but they also talked politics and trade and the literate read books aloud to the others. With the advent of newspapers and magazines, the coffeehouses became also places for reading. “The word "kiraathane" stems from the individual but mostly collective reading and interpretation of those written materials,” Cantek added.

According to Cantek, Erdogan’s project seeks to draw on the enduring popularity of the coffeehouses and appears to be designed as a response to the People’s Houses — the community centers Turkey’s secularist rulers established in the early 1930s — by a government that “is based on the renunciation of the Kemalist regime’s inheritance.”

In the fledgling years of the republic, the state believed people were “vegging out” in the coffeehouses; by opening the People’s Houses across Turkey, it sought “to activate the young population and lure it into a Western lifestyle and a modern culture of daily life,” Cantek said.

“No doubt, the artistic activities, balls and tea parties organized [in the People’s Houses] and the fact that men and women spent time together are not to the liking” of Erdogan and his Justice and Development Party (AKP), she said. “Erdogan probably thinks he is bringing an alternative to both the spirit of the People’s Houses, which for him were too Westernized and secular, and the coffeehouses, which are being associated with idleness and anachronism.”

If the People’s Houses sought to imbue the secular republican ideology, then what could the purpose of the “nation’s coffeehouses” be? According to Cantek, the purpose would be to promote “the newly acceptable citizens of the AKP.”

In a similar vein, Korkmaz Alemdar, one of Turkey’s leading communication scholars, argued that Erdogan’s project should be interpreted in the context of his grumblings that the AKP has failed to establish supremacy in the cultural and social realm despite being in power since 2002. In a public speech in May 2017, Erdogan said, “Being in power politically is one thing; cultural and social dominance is another.” He said he regretted that “People with mindsets estranged from their country and nation remain the most influential in many fields, from media and cinema to science, technology and law.”

Alemdar, however, believes Erdogan’s project can hardly spur an ideological transformation as the People’s Houses did. “Erdogan has to go beyond tea and muffins,” the scholar told Al-Monitor.

For Mahmut Tanal, a lawmaker for the main opposition Republican People’s Party, Erdogan’s pledge of free tea and muffins is a grotesque evocation of the famous words attributed to French Queen Marie-Antoinette, who was reported to have said, in reference to peasants unable to find bread, “Let them eat cake.”

“The people are hungry and asking for bread, but Erdogan is telling them to eat muffins,” Tanal told Al-Monitor.

AKP-run municipalities have already launched a couple of library-equipped coffeehouses as part of Erdogan’s project. According to pro-government media, the project is essentially about “reading houses” — but what books they will offer and what discussions will take place there remains to be seen. Still, one could easily predict that the venues will serve Erdogan’s objective of raising a “pious generation” if he wins the June 24 polls.