As electioneering heats up ahead of Turkey’s June 24 polls, opposition leaders lash out at government moves to naturalize Syrian refugees, arguing that the refugees should go when quiet returns to Syria. 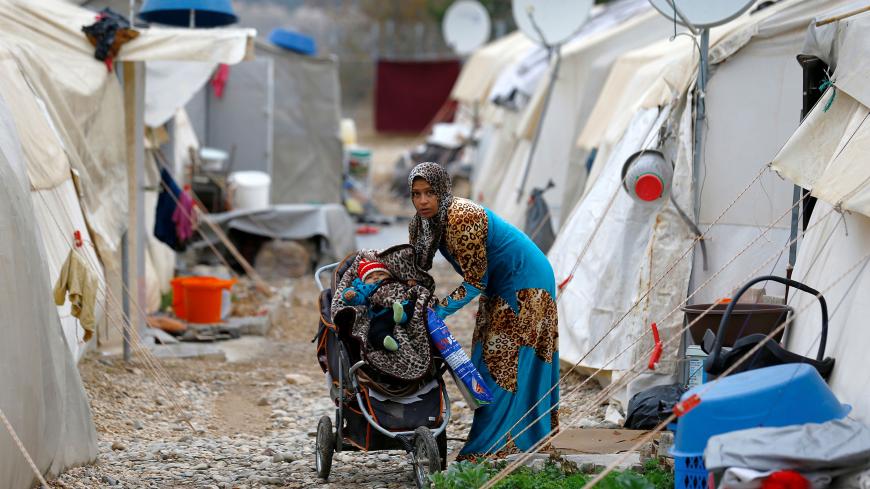 A Syrian refugee puts her baby into a stroller in Nizip refugee camp, near the Turkish-Syrian border in Gaziantep province, Turkey, Nov. 30, 2016. - REUTERS/Umit Bektas

The more than 3.5 million Syrian refugees in Turkey, who constitute a major realm of social problems for the country, have become a topic of election campaigns ahead of the June 24 presidential and parliamentary polls. Opposition leaders call for the Syrians to go home as soon as the conditions in Syria allow, while the government maintains its welcoming attitude and even advocates Turkish citizenship for the refugees.

In a TV interview last month, Muharrem Ince, the presidential candidate of the main opposition Republican People’s Party (CHP), slammed a government decision to allow more than 70,000 Syrians to go home for the upcoming Muslim holiday of Eid al-Fitr and then return to Turkey, arguing that holiday trips to Syria meant the refugees could go home for good. “If you are able to go there, stay 10 days and return, then you could stay there permanently. Why are you coming back? … Is this [country] a soup kitchen? My country is full of jobless people,” he said.

Though Ince maintained that he favored a “festive send-off” for the refugees after a political settlement in Syria, his harsh remarks earned him criticism from various quarters but also applause from ordinary Turks on social media. Prime Minister Binali Yildirim, meanwhile, said, “Our fate preaches help for people in need. … Some cannot tolerate even people who run from death.”

In February 2016, the government made it possible for refugees to work legally, with some conditions attached. More recently, it has given the green light for naturalization as well.

In early May, President Recep Tayyip Erdogan argued that naturalizing the Syrians would help them provide for themselves and relieve Ankara’s burden. Recounting a visit to the historic Spice Bazaar in Istanbul, he said, “I saw Syrians working in almost every shop. They were not yet citizens, but almost all of them spoke intelligible Turkish. … Without citizenship, they work illegally. There are doctors, engineers, lawyers and nurses among them. Should they become citizens, they will earn their bread, working with social security. … They will become self-providers.”

In border provinces such as Gaziantep and Sanliurfa, which are home to large refugee communities, the authorities are already accepting citizenship applications. Metin Corabatir, the head of the Research Center on Asylum and Migration, told Al-Monitor that about 30,000 Syrians had applied for citizenship and more than 10,000 of them had been naturalized so far.

No official figures are available, as the government remains tight-lipped on an issue that is prone to political polemic and popular backlash. The Interior Ministry offers various statistics on the refugees on its website, but no figures on naturalized Syrians. How many Syrians have become eligible to vote in the June 24 elections is also unclear. The only official statement so far has come from former Deputy Prime Minister Veysi Kaynak, who said in February 2017 that 80,000 Syrians would receive citizenship after the constitutional referendum in April that year. Erdogan’s latest remarks suggest that the figure will increase.

CHP leader Kemal Kilicdaroglu has also voiced harsh objections to naturalization. Referring to Turkey’s military campaign in northern Syria, he grumbled in a May interview that young Turks were “falling martyrs for Syria in al-Bab,” while Syrian youths “pace the streets with jaunty swagger” in Turkey. “Is this something that reason can accept? I am not an adversary of Syrians, but I am against the naturalization of Syrians while 6.5 million people are jobless in this country,” he said. “The civil war in Syria should come to an end as soon as possible, and our Syrian brothers should return home.”

Meral Aksener, the chairwoman and presidential candidate of the Good Party, also wants the Syrians to go. “The homeland is the place where people are happy. We will certainly send our Syrian brothers home after fixing our ties with Syria,” she told a May 31 rally in northwestern Turkey.

In sum, the opposition argues for progress toward peace in Syria to encourage the refugees to return, while the government is trying to make them self-sustaining through work permits and citizenship.

CHP lawmaker Omer Fethi Gurer, who made an unsuccessful attempt for a parliamentary inquiry into the refugee issue earlier this year, told Al-Monitor he sought the inquiry because “the real number of the Syrians, the number of those who have obtained citizenship, the amount of money that was spent on the refugees and how that money was spent remain unclear.”

Gurer stressed the CHP was not advocating an immediate return for the refugees amid the ongoing conflict. “First, peace should be secured under the leadership of the international community, and then the infrastructure for return should be prepared,” he said. By infrastructure, he said, he meant the rebuilding of homes and incentives for the revival of agriculture. “In that case, they themselves will want to go home because they are not happy here. They are living in very tough conditions, working as seasonal labor or begging in the streets,” he added.

For Corabatir, the conditions for a safe return remain a distant prospect. Still, he believes that “a great majority of the refugees will return if an international settlement is reached in Syria and if they can rebuild their homes and cultivate their fields.”

According to Corabatir, the refugees’ holiday visits to Syria speak of their intention to return. “Those who go to Syria for the holidays do so to check on their homes and find out about the latest situation. The fact that they make those checks indicates that they will go back when the country returns to normal,” he said.

Corabatir argued, however, that many citizens are likely to stay in Turkey, stressing that the longer the conflict in Syria drags on, the more the refugees’ integration in Turkey will advance, eroding their desire to return home. In the past seven years, many Syrian children were born and grew up in Turkey, while others enrolled in universities or set up businesses, Corabatir said, adding that such bonds were weakening the refugees’ bonds with their own country.

He recalled also a new property law in Syria, which has raised the specter of the state confiscating the properties of displaced people and leaving many without a home in which to return.

Ordinary Turks are also active in the debate on whether the Syrians should go or stay, as social media suggests. The topic even appeared on an online forum for young women discussing mostly beauty tips and relationships. “They should go; compassion has limits,” one member wrote, while on another forum a participant suggested, “If a referendum were to be held today, 95% would vote that they should go.”