Leading refugee expert Metin Corabatir says the Turkish government must come up with clearer legislation and policies to address the problem of Syrian refugees, and work much more closely with the international community and NGOs. 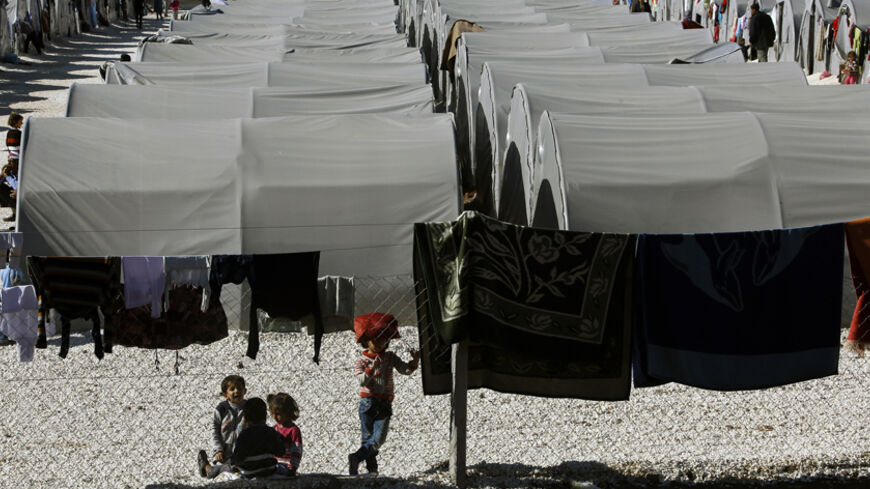 Kurdish refugees from the Syrian town of Kobani are seen inside a fenced refugee camp in the border town of Suruc, Nov. 5, 2014. - REUTERS/Yannis Behrakis

Speculation continues to be rife over what Turkey’s military contribution to the fight against the Islamic State (IS) is. What is not open to debate, however, is the massive humanitarian contribution it is trying to make that outshines efforts by the West, which remains reluctant even when it comes to providing shelter for Syrian refugees.

Citing data provided by the London-based Syrian Network for Human Rights (SNHR), Turkey’s semi-official Anadolu Agency reported this week that of the 5.8 million Syrians that fled to neighboring countries since the beginning of the conflict, 1.9 million have taken refuge in Turkey.

This includes the estimated 190,000 refugees from Kobani, the predominantly Kurdish town in Syria near the Turkish border who fled the IS onslaught and were taken in by Turkey. Citing the same source, Anadolu said 450,000 of the Syrian refugees in Turkey were children and 270,000 were women.

Generous and welcoming as Turkey may appear, Turks are generally not happy with the massive influx of refugees, and the country has already witnessed tension between the Syrians and local Turks.

Prime Minister Ahmet Davutoglu, however, rejects domestic criticism over his government’s policy on the Syrian refugees and insists that Turkey will keep its doors open to all those fleeing that country.

Remarks by Deputy Prime Minister Numan Kurtulmus this week, however, are set to anger Turks who feel the government policy on Syrian refugees is ill-conceived and foolhardy, given Turkey’s limited capabilities and the potential for social unrest.

In an address to the Parliamentary Planning and Budget Commission on Nov. 6, Kurtulmus said the 1.6 million Syrian refugees (quoting a lower figure than that of SNHR) were here to stay.

“Unfortunately, we looked on the Syrian refugees as temporary, that they would arrive and leave in a few months. But after 3½ years of this civil war it looks like they will remain here,” he said, adding that officials from the military, the national intelligence agency, MIT, the Ministry of Health and the Ministry of Education were currently engaged in discussions on how to cope with this situation.

According to official figures, only 200,000-250,000 of the refugees in Turkey were sheltered in official camps where conditions have been confirmed by international observers — including high-profile personalities such as the actress and human rights activist Angelina Jolie — to be very good.

Already difficult conditions for the majority of Syrians in Turkey who are outside of these camps are, however, said to be getting gradually worse due to delays by the government in introducing the necessary legal and social measures.

Al-Monitor spoke with one of Turkey’s most authoritative voices on refugees about Kurtulmus’ admission and what this will mean for Turkey. Metin Corabatir, the long-serving former spokesman for the UNHCR in Turkey, who currently heads the Center for Asylum and Migration in Ankara, agreed with the deputy prime minister’s assessment.

“What Kurtulmus says is true. It does not look like peace will arrive in Syria anytime soon so these refugees are here to stay,” Corabatir said, adding that Turkey could not have abandoned these people to their fate on its border.

He pointed out, however, that conditions for the Syrians across Turkey’s 81 provinces, who are trying to survive outside the camps set up by the government, are continuing to deteriorate due to diminishing funds and lack of official and public support.

“This is a great economic and social burden for Turkey, and we have already seen social unrest because of it. But these people will stay and you can’t force them out, so the government has to take the necessary steps.

“Recently introduced legislation tried to address the issue and refers to temporary protection for refugees but does not say much about their right to work, for example, or to other rights that normally pertain to refugees,” Corabatir said.

He said this legislation, which is vague and piecemeal, also does not specify anything about working with the international community to find third countries to settle the refugees in.

“We have to find the means to live with these people for an open-ended period. This will make it important to come up with policies that focus on integration, freedom of travel, ability to work and hold jobs, education for children, language education for adults and so on,” Corabatir said.

“Turkey has undertaken a great responsibility but the approach now should not focus on charity but on integration, as well as establishing the necessary legal infrastructure for the Syrians,” he said, referring to the social problems caused by the refugees.

Corabatir gave the example of Syrians who are allowed to open small shops in Turkey but do not pay taxes, because there is no legal framework for this, while Turkish shop owners have to pay their taxes. Incidents like this, he said, fuel the resentment felt against Syrians.

Other reasons that are cited by experts for fueling tensions between refugees and local Turks include the low wages the Syrians are prepared to work for, thus undercutting the labor market, and the increase in rents for housing due to the high demand by refugees.

Corabatir also believes that the government's complaints are not fully justified about insufficient support from abroad, and about having to foot the bill for the refugees on its own.

“Enough is not being done to attract more international aid. Due to security concerns there is not enough concentration on publicity as to what Turkey is trying to do and what it needs. Unlike other countries where the refugees have taken shelter, Turkey is also reluctant to allow foreign media in to cover this issue,” he said.

“There is also a reluctance to work with nongovernmental organizations [NGOs] because of an exaggerated fear that these organizations are engaged in activities against Turkey’s interest like spying.

We have only recently started working with some respectable international NGOs,” Corabatir said.

He also underscored that Ankara was not justified in complaining about the lack of outside help because it was the Turkish government that initially had said it did not need any international assistance to cope with the Syrian refugees, maintaining that it could handle this on its own.

Corabatir believes that the buffer zone, or safe haven, for refugees on the Syrian side of the border that the Davutoglu government is pushing for is also very unlikely to be established, and is at any rate not feasible as a means of controlling the influx of refugees into Turkey.

“Some restrictive conditions can perhaps be introduced for new arrivals but this will create other kinds of problems,” he said, adding that Turkey has to be much more open to international cooperation than it is in trying to cope with this problem. Corabatir also believes it is possible to look at this problem in a positive light.

“Helping these refugees is a long-term investment for Turkey. The war in Syria will end one day and when these people return they will do so after having been protected, educated and looked after by Turkey. They will return to their own country with strong ties to Turkey,” he said.

Looked at from today’s perspective, however, that day appears so far ahead in the future that it is barely visible. The only thing certain in the meantime is that the magnitude of Turkey’s refugee problem is growing, and the government appears unable to cope with it, although it insists it will never close the door to refugees from Syria.