How will Turkey react to stream of Kurdish refugees?

Turkey has reportedly received over 130,000 refugees since the Islamic State attacked the northern Syrian town of Kobani. 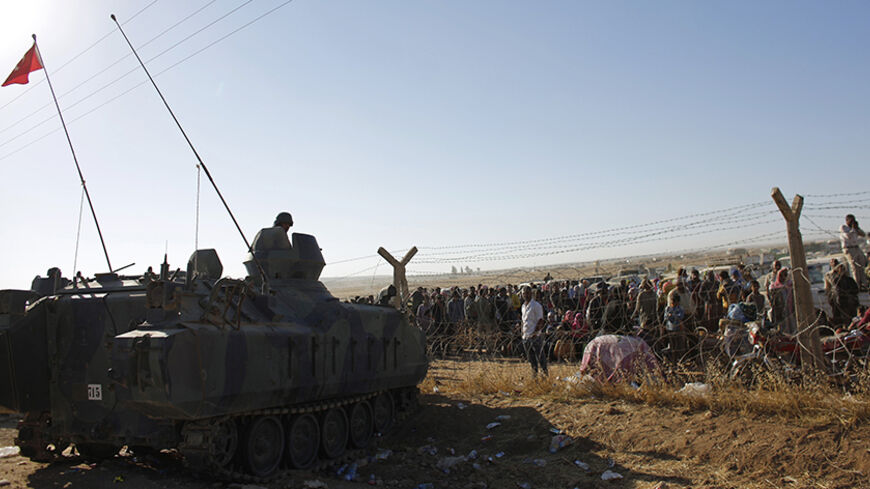 On Sept.19, Islamic State (IS) militants started to attack dozens of Kurdish villages in northern Syria across the Turkish border, triggering a new wave of refugees. Turkish Deputy Prime Minister Numan Kurtulmus said Sept. 22 that more than 130,000 Syrian Kurds have crossed the border into Turkey since IS laid siege to the border town of Kobani, also known as Ayn al-Arab. “We are prepared for the worst-case scenario, which is an influx of hundreds of thousands of refugees,” Kurtulmus said.

Turkish news channels have been showing live feeds of the refugees, including many women and children, coming to the border fence with just the clothes on their backs. The crossings are occurring not at official border gates but in areas somewhat removed from where clashes have been taking place. And in fact, the Syrian regime controls only two official border gates, while the rest are in the hands of either the Kurdistan Workers Party (PKK) or the extremist forces.

Turkey has suggested establishing a buffer zone in Syrian territory to provide a safe haven for this fleeing population. There are already more than 1.5 million Syrian refugees in Turkey; more than 30,000 Yazidis from Iraq also have found refuge in Turkey since August after fleeing from IS.

“I commend Turkey’s welcoming response to offer refuge and aid to this population so suddenly and violently driven from their homes in fear for their lives,” said Antonio Guterres, the UN high commissioner for refugees. "This massive influx shows how important it is to offer and preserve asylum space for Syrians as well as the need to mobilize international support to the neighboring countries so generously hosting them."

Concurring with Guterres, Metin Corabatir, vice president of the Research Center on Asylum and Migration (IGAM), told Al-Monitor that Turkey also needs to rapidly implement policies that will encompass allowing these people to stay for the long term. “Turkey has not officially granted these Syrians refugee status, but even if it does grant them refugee status today, it would not be possible to send this many people off to other countries,” Corabatir said. “They are here to stay.”

Turks are, however, becoming more uneasy about refugees and want them out of their lives. The longer the refugees stay, the more that locals face the reality of constantly being around people who speak a different language and who lack jobs, schooling and seemingly all hope. Even middle-class refugees have nearly exhausted all their savings after almost four years in Turkey. And the new group of mainly Kurdish refugees are also stepping into a country where they have mixed feelings due to the historical ethnic baggage.

Hasan Unal, head of the department of international relations at Atilim University, said Turks are also becoming more concerned that they will become the target of radical terrorists. Unal told Al-Monitor that while Turkey had been expected to exercise tighter control of its border with Syria, it is now practically a sieve. “That border area is like Peshawar now,” Unal said. “Turkey should even consider talking to the Syrian regime to find a solution to end this flow of refugees. They must do something to redirect these people to head toward the [Syrian President Bashar al-] Assad-controlled areas.”

Syria's state-run television said Sept. 16 that government forces were responsible for blowing up the al-Siyasiyeh Bridge over the Euphrates River, in what was seen as a move against IS benefiting the Kurds. On Sept. 12, the Kurdish People's Protection Units (YPG) also announced it had formed new a coalition, Burkan al-Forat, with what is left of the Free Syrian Army and the Islamic Front to fight against IS militants. There has been much speculation since the beginning of the civil strife in Syria that Assad's regime would do all it could to find a way to benefit the Kurds in a move against Turkey. Yet, it could be that Assad and the Kurds will not unite forces either against IS or Turkey. There seem to be no reliable alliances left in the Syrian war zone, which is now a very fluid and moving theater. Syrian air forces blowing up the bridge favoring the Kurds against the IS militants may actually mean nothing, or something just for one day: No one should place too much value on that one action.

In this atmosphere, Turkish President Recep Tayyip Erdogan will try to win the support in New York this week at the UN General Assembly meetings to establish a buffer zone inside Syria. Erdogan actually sought international support for a buffer zone long ago in an attempt to have the Syrian regime overthrown. Although Erdogan has not made any public announcement changing that policy of deposing the Assad regime, he is now arguing that Turkey needs to set up a buffer zone to build refugee camps. While it looks unlikely that it will get such approval, Turkey seems determined to argue that the Syrian border is no longer controllable and therefore establishing this buffer zone is also necessary to prevent the Syrian violence from becoming a bigger problem for Turkey.

There is much speculation in the Ankara beltway suggesting that Turkey could take a back seat while Islamic radicals and the Kurds fight to the finish. Turkey would inevitably have to get involved to prevent the radicals from moving further inside its territory. Turkey is now faced with the challenge of preventing Kurds in Turkey from crossing the border to join YPG forces in the fight against IS militants in Syria.

The PKK, which has fought the Turkish state in an attempt to establish an independent Kurdistan, called on its fighters to take up arms against IS. "Supporting this heroic resistance is not just a debt of honor of the Kurds but of all Middle East people. Just providing support is not enough; the criterion must be taking part in the resistance," the PKK said in a statement on its website Sept. 21.

"The young people of north Kurdistan (southeast Turkey) must flow in waves to Kobani," it said. Turkey closed its border for any crossings from Turkey to Syria Sept. 22.