The crown prince of the United Arab Emirates visited Russia last week for the seventh time in five years, meeting with President Vladimir Putin to discuss many areas in which they agreed to collaborate. 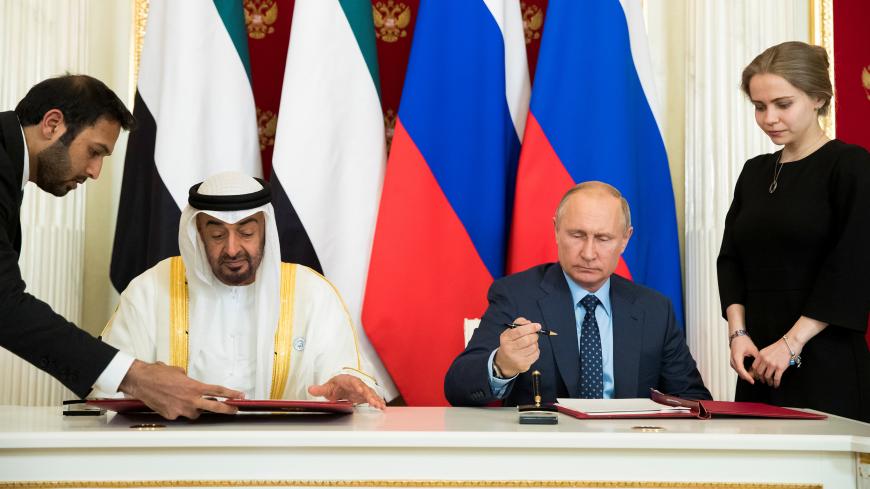 Russia and the United Arab Emirates have agreed to bolster their cooperation on security and defense, the aluminum and oil markets, and the economy. The countries also agreed to "coordinate efforts to convert the Middle East into a zone free of weapons of mass destruction."

A pivotal point in the declaration is the countries’ goal of strengthening cooperation in security and defense by re-energizing consultations between their respective government agencies. The UAE and Russia have also called for an international counterterrorism coalition that would operate on the basis of “respect for the sovereignty of states” that had directly suffered from terrorist attacks. The parties also agreed to develop political contacts on key bilateral, regional and international matters.

Russia observes the increasing role for the UAE in the region and the Emirates’ goal to become a serious regional power with its own political interests, agents of influence and military presence from Libya to Eritrea and from Somalia to Syrian Kurdistan. Therefore, it’s important for Abu Dhabi and a more pro-active Moscow to coordinate their positions on key issues and find points of convergence on respective foreign policy priorities. The range is rather broad but at this point focuses on efforts to settle сonflicts in Syria, Yemen and Libya.

Russian and Emirati approaches toward Syria have grown in many ways. The UAE is coming to believe that both Turkey and Iran have to stop interfering in Arab states' domestic matters. That approach echoes Russia’s statements on the need for foreign forces — including Turkish and Iranian ones — to leave Syria. In the long term, this stance could serve as a basis for bringing Russian and UAE positions on this issue even closer.

Among its Gulf Cooperation Council (GCC) partners, the UAE position toward Damascus had been arguably less assertive. The UAE no longer supports the militant Syrian opposition that calls for the ouster of President Bashar al-Assad but continues to finance those groups that are open to political dialogue. For instance, the UAE backs Syria's Tomorrow Movement, which plays an active mediating role in setting up contacts between the Russians and Syrian opposition groups and the US-backed Kurd-Arab coalition, the Syrian Democratic Forces (SDF).

In April, speaking at the FIKR 16 conference in Dubai — which was organized by the nongovernmental organization Arab Thought Foundation — UAE Foreign Minister Anwar Gargash said Arab countries made strategic mistakes regarding the conflict in Syria. He said they shouldn't have allowed non-Arab countries to be involved in deciding Syria's fate and the Arab League should have exerted a more robust political influence. The statement could be seen as UAE’s readiness to get involved in the political settlement of the Syrian crisis. If this is the case, Moscow could use this involvement in its own interests, including on issues of reconstruction.

At the same time, the UAE is inclined to support the SDF, especially its Arab component. This is one reason the UAE is sending the message to Ankara that Turkey's presence in Syria is illegal. This also gives Moscow an opportunity to play on the Turkey-UAE antagonism in Syria and thus drive a wedge into the Syrian opposition.

As for Yemen, the UAE is interested in seeing Russia take a more proactive and constructive role in the conflict there. Moscow has been supporting contacts with all parties in that crisis and could indeed play a bigger role in setting up a peace dialogue. Abu Dhabi probably believes that, should Moscow get more involved in the conflict, it would benefit Emirati interests.

Russia has already lowered its profile with the Houthi rebels. Yet that doesn’t mean that Moscow at this point favors Yemeni President Abed Rabbo Mansour Hadi, whose relations with the UAE are far from smooth.

Ahmed Saleh— the son of former Yemeni President Ali Abdullah Saleh, who was ousted in 2012 and killed in December 2017 — might be an acceptable Yemeni leader for the UAE and Russia. He and his Arab nationalist political party, the General People’s Congress, may prove useful in the future to the UAE. Russia could potentially be an important reinforcing factor in this Emirati calculation. Moscow has been maintaining contact with Ahmed, and Russia will also most likely be more active in its work with the pro-Emirati southern separatists. There are still many in the south who, back in the days of the People's Democratic Republic of Yemen, used to work with the Union of Soviet Socialist Republics.

Russian and Emirati approaches are also similar in Libya. While both support Gen. Khalifa Hifter, who controls much of eastern Libya from Tobruk, the UAE seeks to play the middleman — together with France and Egypt — between Hifter and the opposing government in Tripoli. The UAE had already provided a venue in Abu Dhabi for talks between Hifter and Prime Minister Fayez al-Sarraj of the UN-recognized Government of National Accord in Tripoli. Russia seeks a similar role interacting with all parties in the Libyan conflict while being cautious not to upset the fragile balancing act between Tripoli and Tobruk. Therefore, one shouldn’t rule out Abu Dhabi, Cairo and Moscow working closer together on the Libyan track.

The military-technical sphere also remains one of the most promising for bilateral cooperation. Both have accumulated experience with each other in this area: The UAE military has been using Russian weapons such as BMP-3 infantry combat vehicle, Pantsir air defense missile system, Smerch multiple launch rocket system, Igla man-portable air defense missile system and others. The UAE’s biggest interest is in joint development of new arms and setting up production on Emirates territory. In the recent past, such joint projects resulted in the production of the NIMR wheeled armored military vehicle. Now the parties are talking about the potential participation of Russian companies in equipping the UAE’s new Rabdan 8x8 wheeled infantry fighting vehicle (IFV) and the Enigma 8x8 wheeled IFV with armaments. Joint production of a fifth-generation, light fighter aircraft is also on the table.

In their talks, Putin and Al Nahyan also focused on economic cooperation. The declaration they signed suggests they will team up to help stabilize the world’s oil and gas markets, including at international venues such as the Gas Exporting Countries Forum. The parties also plan to establish a special working group on cooperation in the aluminum industry.

A soft-power tool aiding the Russia-UAE economic relationship is the presence of 25,000 Russian citizens who are often employed as specialists in different sectors of the UAE economy. In turn, more than 300 UAE companies are represented in Russia. By and large, of all GCC members, it is the UAE with its “rejection of all forms of Islamism” that is most acceptable to Moscow. Russia sees its relationship with the UAE as being conducive to political interaction and holding strong cooperation potential.