Prime Minister Benjamin Netanyahu has promised to deduct money from Palestinian tax revenues to compensate the Israeli victims of kite-borne arson along the Gaza border. 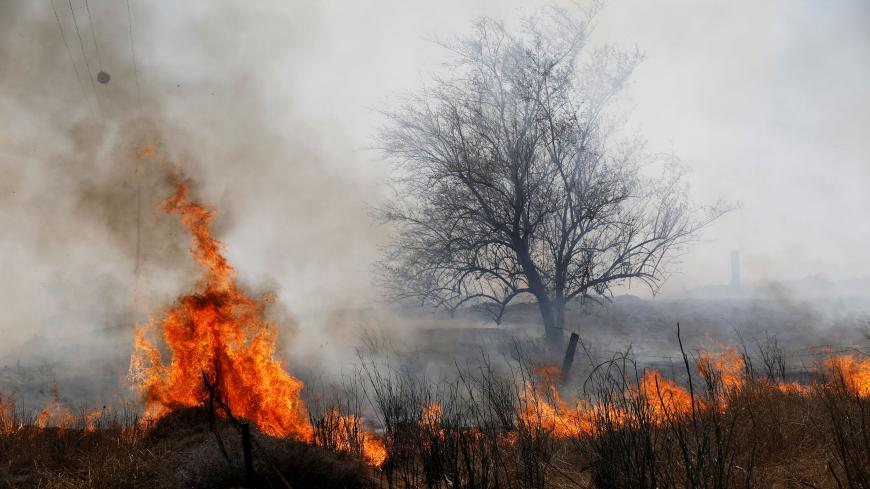 A fire burns in scrubland on the Israeli side of the border between Israel and the Gaza Strip, near kibbutz Or HaNer, June 3, 2018. - REUTERS/Amir Cohen

GAZA CITY, Gaza Strip — Israel will compensate farmers and townspeople bordering the Gaza Strip that sustained damage as a result of flaming kites sent over the Gaza border, and Prime Minister Benjamin Netanyahu has asked the head of Israel's National Security Council to withhold the money from funds intended for the Palestinian government. The June 3 announcement on Twitter sparked anger among Palestinians.

In the course of the March of Return that kicked off March 30, some protesters have found a novel way to respond to the Israeli army's repression of the protests at the border, during which 123 Palestinians have been killed and 13,672 injured. Protesters are flying kites rigged with incendiary devices that fall on nearby agricultural fields and settlements, causing major fires.

Israeli Defense Minister Avigdor Liberman noted June 4 that 600 such kites have appeared since the start of the protests on March 30. The Israeli army intercepted some 400 while the remaining 200 kites fell on Israeli territory, burning 9,000 dunums of agricultural land. On the same day, the Israeli Finance Ministry announced it will compensate farmers for up to half of the losses they sustained from balloon and kite attacks.

PLO Executive Committee member Wasel Abu Yousef described the Israeli decision as extortion by the Israeli government of the Palestinian people and institutions. He told Al-Monitor, “Israel’s government is violating the agreements signed between the two sides regarding the Palestinian taxes and clearance of funds.”

Abu-Yousef explained that the Palestinians are not bound by the Paris Protocol as long as Israel keeps violating it, saying, “The suspension of this protocol and other agreements will be discussed at the meeting of the PLO Executive Committee expected to be held before the end of this month.”

On May 7, the Knesset approved the first reading of a bill submitted by Liberman allowing the Israeli Finance Ministry to withhold $300 million on an annual basis from the Palestinian tax revenues. This deduction is equal to the money paid by the PA to compensate families of those captured, injured or killed in resistance activities.

One kite maker told Al-Monitor on condition of anonymity that he and a group of other young men manufacture between three and five kites a day, some of which cross the Israeli borders; others fall in the Palestinian territories. He called the kites a "tool of peaceful resistance" used to confront the Israeli army and its live bullets. He added that not all of the kites are fitted with incendiary devices.

On May 4, the Israeli press reported that the army was mulling measures to combat the kites such as deploying drones to intercept them before they cross into Israel. The first days of June saw a significant increase in fires started by kites and helium-filled balloons carrying firebombs.

Muin Rajab, a professor of economics at al-Azhar University in Gaza, called on the PA not to remain silent. “Palestinians have several options to deal with those decisions,” he told Al-Monitor. “These options include threatening to end security coordination, the most important link between the PA and Israel. Israel reaps great benefits from this coordination, specifically in the West Bank.”

Akram Atallah, a political analyst and writer for the Palestinian daily Al-Ayyam, told Al-Monitor that Israel has very carefully drafted bilateral agreements with the PA making it very difficult for Palestinians to disengage from these agreements, particularly in economic aspects.

“Palestinians have no alternatives to the Israeli port of Ashdod for importing goods and merchandise,” he said.

Meanwhile, Gazans keep flying burning kites into the nearby Israeli settlements, disregarding the June 5 call by Israel’s Public Security Minister Gilad Erdan for the Israeli army to treat the kite-flyers as terrorists and shoot them.