Knesset blocks bill to deem Israel 'state for all its citizens'

Knesset Speaker Yuli Edelstein rejected this week a law proposal presented by the Arab Joint List redefining Israel as the state of all its citizens. 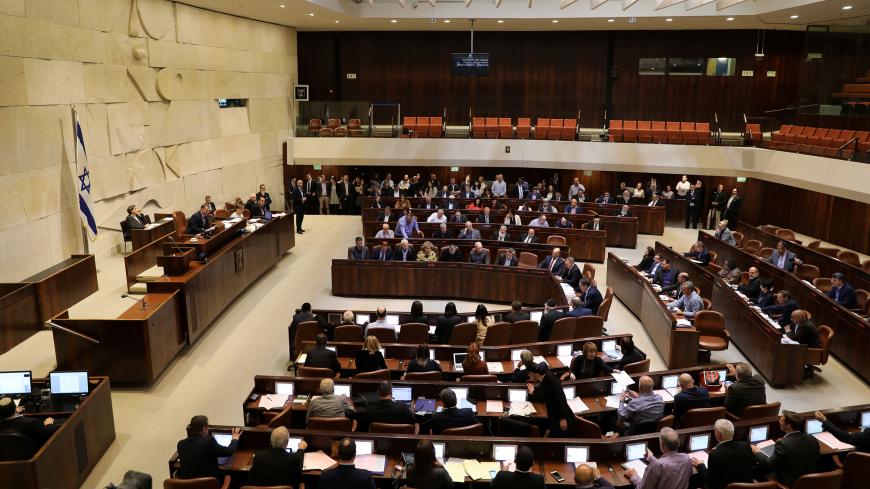 Israeli lawmakers attend a vote on a bill at the Knesset, the Israeli parliament, in Jerusalem, Feb. 6, 2017.

Rarely do parliaments in democratic states flatly refuse to debate proposed bills and disqualify them before they are even put on the agenda. However, this happened June 4 when the Knesset Presidium decided in “an unusual move,” by its own admission, to reject the submission of a proposed constitutional law sponsored by three members of the Balad faction within the Arab Joint List. Their proposed basic law, titled “State of all its citizens,’’ sought to redefine the character of the Jewish state, qualifying it as giving equal status to the Jewish nationality and the Arab nationality.

Knesset Speaker Yuli Edelstein said this was the first time since he took office five years ago that he had recommended vetoing proposed legislation, adding that the presidium had not vetoed a single proposed bill in the current Knesset or in the previous one.

“The three [Knesset members] from Balad keep trying to garner votes through provocation,” Edelstein stated, “and we cannot lend a hand to this.” Has he really forgotten the embarrassing provocation to which his Likud Party colleague Culture Minister Miri Regev subjected him on Israel’s recent Independence Day celebrations? When she hijacked the traditional keynote address at the ceremony from the speaker for Prime Minister Benjamin Netanyahu, was Regev not trying to “garner votes” among Likud members? Does Edelstein not know of any Jewish lawmakers who submit bills in order to pick up votes? “Placing this bill on the Knesset's table may set a precedent for placing other inherently racist bills on the Knesset table,” said Knesset member Revital Swid of the center-left Zionist Camp. Swid was one of seven presidium members who voted to disqualify the proposed law. Only two presidium members (both Arabs), Esawi Frej of the left-wing Meretz Party and Ahmed Tibi of the Joint List, voted “nay.”

What was the issue that so riled Jewish lawmakers from the coalition and opposition parties? Why did this proposal make them bare their teeth? What is that “precedent for other inherently racist bills” to which Swid referred? Can they be referring to a clause in the bill that recognizes the existence and rights of the two national groups — one Jewish, one Arab — living in the State of Israel? Perhaps the problem lies in its proposed system of government based on separation of religion and state, while ensuring freedom of worship for all religions? Or were they beside themselves over language stating, “The state shall respect the individual and collective identity of its citizens on an equal basis, without discrimination on the basis of nationality, race, religion, gender, language, color, political views, ethnic origin or social status"?

Indeed, the proposed law is not Zionist. Its sponsors seek to nullify the right of return that grants automatic citizenship to all Jews and to change the symbols and anthem of the state so that they provide equal expression to both nations living in Israel. What racist overtones does it contain that are any different from the ones enshrined in the proposed nationality law that enjoys the support of Netanyahu and most members of the ruling coalition? The proposed nationality law seeks to define the character of the state through constitutional-style legislation that fails to guarantee the human rights of all the country’s citizens, chief among them the right to equality, the right to language, culture and minority rights. The proposed bill enshrines racial segregation in housing and undermines the rights of one-fifth of the country’s citizens to their language, culture and identity.

“There is something highly embarrassing in viewing Israel’s definition as a state of all its people as undermining the fundamental principles of our system of government and therefore disqualifying it in advance,” wrote leading legal scholar Mordechai Kremnitzer in Haaretz on June 5. Kremnitzer, a professor emeritus of the Faculty of Law at the Hebrew University of Jerusalem, said, “If this is not an obvious fact, there is something fundamentally flawed in our democracy.” The latest Peace Index, issued this week, indicates that almost half of all Israelis (41%) think the country’s democracy is under severe threat. That view is held by 75% of those defining themselves as left wing and 70% of the Arabs polled.

To protect the state from any hint that its Jewish character and symbols are being eroded in favor of the principle of equality, most Knesset members are willing to destabilize one of the central pillars of democracy. At the same time, these same lawmakers support policy and legislation that deprives Israel of its Jewish majority. Since the seating of the current Knesset, 31 bills have been submitted calling for the direct annexation of Israeli settlements in the occupied territories, whether by annexing the entire West Bank, annexing blocs of settlements or imposing Israeli planning and construction laws on extensive areas outside sovereign Israel. It is only thanks to human rights organizations that refuse to give in to the campaigns of incitement being waged against them that the Regularization Law, designed to authorize the establishment of settlements on private Palestinian lands, is now under deliberation by the Supreme Court.

In addition to the moral, security and diplomatic cost being exacted by the settlements on Israel, they are forcing the state to choose between turning into a binational state or an apartheid regime. According to data presented to the Knesset by military authorities in March, Arabs outnumber Jews in the area under Israeli control between the Mediterranean Sea and the Jordan River — 6.8 million Arabs versus 6.5 million Jews. The latest violence along the border with Gaza clearly demonstrates that Israel’s unilateral withdrawal from the enclave in 2005 failed to sever it from Israel, which continues to control its air space, territorial waters, supply of goods, water and power.

The Jewish majority in the Knesset can violate the right of Arab lawmakers to submit a bill seeking to define Israel as a state of all its citizens, even though this is an accepted definition in all democratic nations around the world. However, Israel can hardly be called a democracy when this majority refuses to represent millions of people whose fate is controlled by the state and to ensure their rights. At the same time, many Jews around the world, most of them affiliated with liberal Judaism, are having a hard time defining an occupying state that establishes settlements on stolen lands as a Jewish one.