A year after Mosul was liberated from the Islamic State, the bodies of the group’s fighters are finally being recovered from the rubble of their last stronghold in the city. 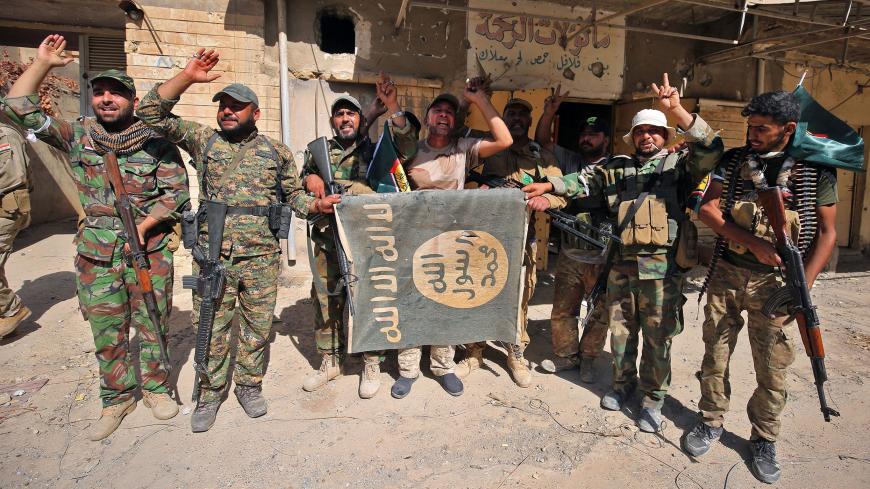 Maj. Ahsan Rasem recognizes members of the Islamic State (IS) by their clothes and explosives belts. Rasem is the team leader of the Civil Defense unit that is recovering bodies in the Meydan neighborhood of Mosul. A year after the liberation of Iraq’s second-largest city, Rasem and his men have been sent to free this last, largely destroyed neighborhood from the sickening stench of death so civilians can return and rebuild their houses.

“These are the bodies that no family members have come forward to claim,” Rasem said during a break from his gruesome task. White body bags are waiting to be collected, and the remains of explosives belts, clothes and blankets are scattered around in the dust. Rasem’s team members have removed their nose coverings to take a breath of fresh air beside the Tigris River.

This is where they started last month, at the river, removing the floating corpses of dozens of IS fighters who were shot here last year while trying to escape the carnage by crossing the river. After that, they started working on the rubble. In just three weeks, some 1,300 bodies that had lain here for almost a year have been recovered.

“Most of them are not Arabs. They are from Holland, Georgia, Chechnya and other countries,” Rasem said. Some identity papers have been found, some with the bodies, some just lying around. Rasem delivers the bodies to the morgue in Mosul. He does not take pictures either of the place where they were found or of their faces for possible identification. “Usually, there is hardly anything left,” he said

According to Iraqi media citing government sources, some 9,000 civilian corpses have been recovered since the liberation. Much of the work has been done in response to pleas from family members. Because nobody asked for the bodies of the IS fighters, most of them remained under the rubble. They were only recovered after Iraqi Prime Minister Haider al-Abadi told the Civil Defense to clean up the last remaining areas of Mosul, the neighborhoods that were IS’ last strongholds in the city.

Some civilians have been found who were probably members of IS families, but most of the recently recovered bodies belong to IS fighters, said Rasem’s boss and the head of the Ninevah Civil Defense force, Col. Husam Ghalil. He said Russia and Georgia are countries where a lot of the fighters originated. Ghalil said he is not aware of anyone from the Netherlands (Holland) being found and does not know why Rasem mentioned the find. “Every country is looking for its own people. But that’s not our responsibility.”

It is a phrase he repeats a couple more times when asked about the IS bodies. They are taken to the morgue and what happens there is not his business, nor where they are buried. Any identity papers found are delivered to military intelligence. But does he warn embassies? Is DNA taken and stored? “That is not our business,” he said.

Ghalil refers to the military authorities in Mosul, but Col. Firas Bashar, a spokesman for the Ninevah operations, said he can neither confirm the nationalities of IS bodies found nor that anything is being done to identify them.

A well-informed policeman in Mosul, who asked to remain anonymous for fear of reprisals, said that IS bodies are simply taken from the morgue to a special mass grave where they are buried. The morgue is overwhelmed with all of the bodies that are still being recovered. According to the policeman, the fighters’ original passports have only come to light by chance, because IS exchanged them for caliphate identity cards. This makes it harder to know the nationality of those found.

As a result, Western family members of IS members who were in Iraq will probably never know if they are still alive, and neither will Western security services who are trying to prevent fighters from returning home. For most Iraqis, this is of no significance, as these foreigners came to fight in a country that was not theirs and destroyed it in the process. They are deeply hated because of this.

Yet international agreements stipulate that countries should work to make identification possible. Both the International Committee of the Red Cross (ICRC) and the International Commission for Missing Persons (ICMP) have trained Iraqis to do just this. The ICMP even signed an agreement with four Iraqi ministries in 2012 that stated that the authorities acknowledge a family’s right to know the fate and whereabouts of their missing relatives, that the government is directly responsible for efforts to locate and identify the missing persons and that an identification process based on DNA and complemented by other forensic methods is most appropriate.

Even though Hayman Awrahim, the ICMP’s Iraq program's communications officer, confirmed to Al-Monitor that there have been meetings with the Medical Legal Directorate in Mosul and that the ICMP “has urged it to ensure the appropriate recovery, collection and documentation of the remains in order to enable scientific identifications in the future,” he said nothing is happening. “It is not yet clear that the necessary political will exists that will make it possible to marshal administrative and other resources to undertake this task.”

The ICMP cannot work by itself and “intends to undertake additional research to have a better understanding of the situation on the ground.”

The frustration is evident in his diplomatic reply when Awrahim stressed that an effective strategy for identifying missing people requires much more than simply exhuming human remains. “The location of graves, exhumation and identification must be done using robust chain-of-custody procedures that are embedded in the domestic judicial system. Location, exhumation and identification must be documented to the highest possible standard, so that evidence gathered in the process can be used in court if perpetrators are brought to justice.”

Like the ICMP, the ICRC is in contact with the Iraqi authorities about the missing people, but its privacy rules only allow it to share information about those known to have been found with their families.

States should be informed when their nationals are found. But even though Germans are known to have been fighting with IS, the German Foreign Office in Berlin told Al-Monitor, “We have not been contacted about any bodies of German nationals, but expect and believe the Iraqi authorities will do so if they are found.”

Whether Rasem’s mention of a Dutch body found in Mosul was a slip of the tongue or not, the Dutch Foreign Ministry said it has not been notified about the bodies of any Dutch IS members found in Iraq. “The Netherlands asked Iraq at an earlier stage to be kept in the loop about these cases,” ministry spokeswoman Willemien Veldman said in The Hague. But she added, “In practice, it will not be simple to make a well-founded assumption of nationality in relation to the remains now being found in Mosul.”