The recent trucker strike in Iran was characterized by its geographical spread and focus on economic demands. 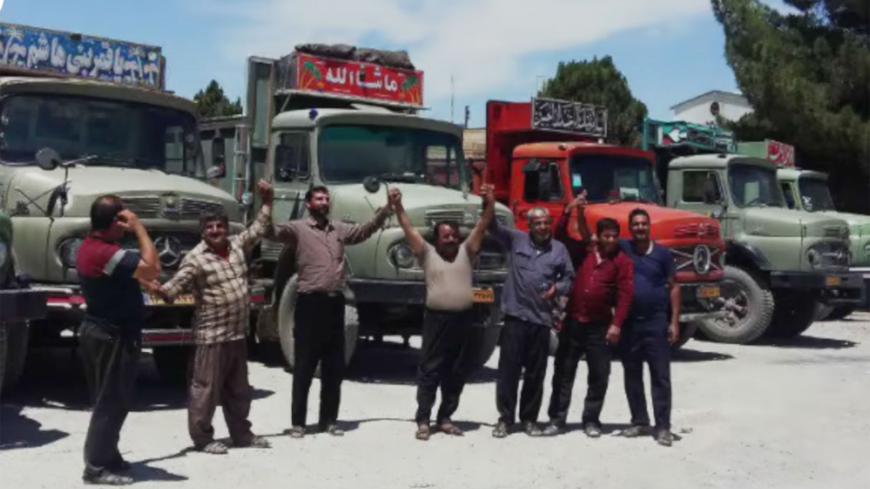 Iranian truckers take part in a strike in a still image from a video uploaded May 25, 2018. - YouTube/Didgah TV

On the first day of what quickly became Iran’s largest trucker strike in recent years, a driver told his audience on film, “Today, May 22, on the ring road of Kavar, we are making sure that none of the vehicles driving between Shiraz and Bandar Abbas can pass. We are stopping everybody.”

Six days later, and with thousands more joining throughout the country, hundreds of truckers in the otherwise small and dormant town in central Iran drove up to Shiraz single file, honking loudly.

Despite not having a union, truck drivers in Iran have staged a nationwide strike for almost two weeks now. Unprecedented in terms of geographical spread, the protest showcases not only the growing solidarity of unorganized groups, but also the changing face of social unrest in Iran.

On May 22, truckers in several towns turned off their engines to call for higher freight rates. While the government had ruled months ago that freight rates would increase by up to 20%, workers were angered that this promise had remained largely unimplemented. Truckers also called for higher pensions, better health insurance and cheaper truck repair facilities.

The protest spread like wildfire. Although the total numbers of participants is unknown, one sympathetic foreign union (the Teamsters) estimated the strike affected an unprecedented 160 cities in 25 out of the country’s 31 provinces. Iran counts over half a million registered truck drivers.

In many ways, the demands echo long-standing grievances of teamsters in Iran. Truck driving is a precarious and insecure job. Drivers are usually independently employed or work in small teams. Without a regular employer, they face difficulties accessing state-provided health and pension services. Rampant corruption has also made cultivating personal connections with terminal and port officials exceedingly important. The president of one of the municipal truckers’ unions said, “Even if cargo fees have gone up … the main issue in our job is abuse and intermediaries, who eat up half of a driver’s income.”

Truckers have struck collectively before. For instance, in the spring of 2016, several thousand workers staged demonstrations in Bandar Abbas, a major port on the Persian Gulf, in response to the slow and unfair distribution of cargo to drivers.

What distinguishes the latest strike from previous industrial actions is its sheer geographical spread. Power in numbers has contributed to the strike’s effectiveness. With drivers in entire regions refusing to deliver goods, numerous towns have faced fuel shortages, leading to long lines at gas stations. In some locations, taxi and bus drivers joined the protests.

Such nationwide solidarity is reminiscent of the wave of protests that hit Iran in late December and early January. Another similarity with those protests is that truckers have little to no organizational support. Although truckers’ unions exist in name, these organizations have very little power and almost no members. These unions also exist only at the municipal level, which leaves national coordination and bargaining with an even weaker and less-representative group of union federations.

Strikers have very explicitly argued that their protest is purely economic and lacks any political dimensions. Despite that, groups opposed to the incumbent moderate government have keenly exploited the protests for their own goals. Media channels close to hard-line Principlists have criticized the government’s handling of the transport industry. Former President Mahmoud Ahmadinejad even met with protesting workers to express his support. At the other extreme, exiled groups such as the Mujahedeen-e-Khalq and Reza Pahlavi, a son of the deposed former shah, have zealously proclaimed that the strike is a “turning point” in the viability of the overall regime.

Meanwhile, President Hassan Rouhani's administration has tried to express its goodwill. While discouraging violent actions, Minister of Roads and Urban Development Abbas Akhundi said, “We are not at all upset by the protests of truck drivers and their representatives. I accept the right to protest, and I am convinced that protest is the legal and the natural right of the drivers.”

Simultaneously, the government took action to transfer protests from the streets into a less contentious and more bureaucratic bargaining process. Soon after the strike started, the Ministry of Roads entered negotiations with two union federations to reach a deal on behalf of the truckers. The co-opting of these unions allowed the government to pretend to negotiate with truckers directly.

On May 28, the union federations and the Ministry of Roads reached a deal that would see freight rates increase by 20%. The government also promised to resolve issues around drivers’ insurance and tasked a committee to look into other injustices.

Once this deal was reached, one of the union federations put out a statement declaring that the strike had ended and that all drivers should return to work. So far, the government’s strategy appears to have been effective. The number of participants has dwindled rapidly. Scuffles with strike breakers have also been reported.

Nevertheless, truckers continued to protest in several towns until at least June 1, refusing to accept the deal between the government and the unions, demanding instead that freight rates be increased by up to 40%.

In one video posted on YouTube, a trucker from Kermanshah province said, “Yesterday the police came by, noting down our number plates and handing out fines, warning that the Mujahedeen [-e-Khalq] wants to commit terrorist attacks … and declaring that the protest was now over. But the protest is not over!”

The truck drivers’ strike is unprecedented in Iran, showing the potential for labor actions in the future. In the absence of representative unions, it is crucial to note the role played by political elites in supporting the protesters, which allowed the strike to spread and escape state repression.

However, such endorsement by conservative groups has not benefited organized labor in general, which tends to be pro-Reformist. The main teachers’ union staged countrywide demonstrations seeking better pay in at least 32 localities May 10; this also happened to be the day after President Donald Trump decided to pull the United States out of the nuclear deal. In a sharp turnaround from earlier demonstrations, police violently attacked protesters in Tehran. On May 27, a judiciary spokesman said “judicial and security bodies … will resolutely confront any group or individual that wants to compromise the country’s security.”

What appears to be developing is thus a two-pronged interaction between political elites and protests in Iran. On the one hand, factions opposed to the current moderate administration seek to exploit unorganized social unrest for their own benefit. On the other hand, the increasingly bellicose behavior of the United States has enabled conservative forces inside the country to crack down on organized labor.

In this new and volatile landscape, one thing is certain: Rouhani’s administration must try to normalize social protests if it wants to shield itself from attacks by opponents. A multitude of rival forces, both inside and outside Iran, will continue to do their best to turn any form of protest into a political challenge against the government. So far, the unexpected loser of the strike actions hitting the country on a daily basis is organized labor — a situation Reformists must help turn around if they are to maintain electoral support.