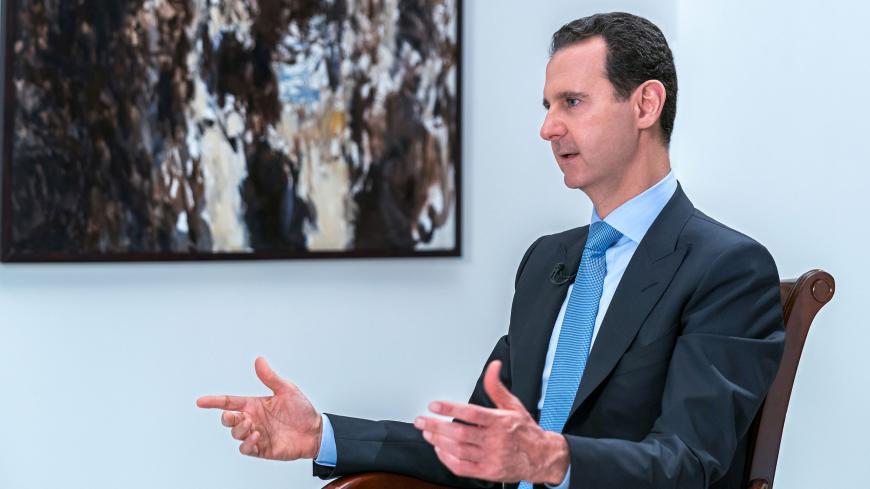 In an interview with Iranian-funded, Arabic news channel Al-Alam, Syrian President Bashar al-Assad discussed a wide range of issues, including the Iranian presence in the southern part of his country and the possibility of visiting Tehran soon.

The interview started with questions about southern Syria, which has become contentious and a source of media speculation regarding stories about the possibility of Russia-Israel negotiations to block Iranians from having a presence anywhere in that area. Assad said the choice in the south has been the same as all over: Either make peace with the armed groups or “resort to force.” He blamed Israel and the United States for supporting what he called “terrorists” and for the lack of an agreement so far.

When asked specifically about any deal regarding Iran in southern Syria, Assad said relations between the two countries are “strategic and will not be influenced by issues relating to the north or the south.” He said Saudi Arabia has repeatedly conveyed to him that if he were to cut ties with Tehran, the situation in the country “would return back to normal,” but he said he is not going to “trade away” ties with Iran.

Assad also said the deal to have Iranians not be involved in operations in the south was an Israeli pitch. Assad said he viewed the possibility of a deal as part of an anti-Iranian propaganda, and that any deal regarding Iran would be made between the two countries and no one else.

Regarding Israeli strikes on Syria and the possibility of a Syrian response, Assad said Syria would always respond within the framework of its possibilities. However, he said the best response to Israeli strikes was to hit back at forces inside Syria who were receiving Israeli support and who he accused of “clearly taking actions in favor of Israeli interests.”

Regarding reports about differences within the coalition of Syria, Iran and Russia, Assad first said that relations between Iran and Syria have been stable for 40 years. He added that Syria has had relations of varying degrees with Russia for seven decades. On the issue of differences, Assad said it is natural to have differences on “daily tactical” issues, but these differences are resolved through negotiations between the sides involved.

Questioned as to why Iranian and Syrian officials typically refer to Iranians in Syria as “advisers” (media reports show that a large number of Iranians have been killed in battle), Assad said the term “adviser” is a general term. He said there are Iranian advisers and also Iranian volunteers. He said that when these “advisers” enter a battle, they become “fighters.” However, he indicated that what is meant by "advisers" is that there are no Iranian units fighting in Syria— meaning no battalions, brigades or divisions.

When asked why Russia has military bases in Syria but Iran does not, Assad said Iran has not requested a military base — but that if there was a need, he added, it would definitely be possible. He suggested the need for Russian military bases is due to the air support Russia is offering.

Assad also said he had planned to visit Tehran but was forced to delay his trip due to internal circumstances, adding that he would soon travel to Iran.