How Iran dropped dual exchange rates but ended up with four

While the Rouhani administration is taking steps toward stabilizing the rial, its rate unification policy has in effect resulted in a multi-tiered exchange rate regime. 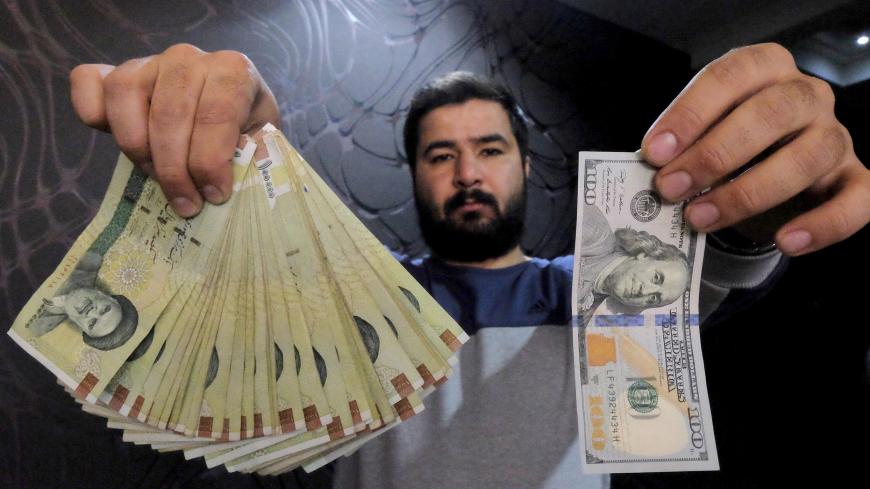 A money changer holds a hundred dollar bill and its Iranian rial equivalent at a currency exchange shop, Tehran, Iran, Jan. 20, 2016. That $100 banknote is worth a lot more rials today. - REUTERS/Raheb Homavandi

The devaluation of the Iranian rial first gained serious steam back in April, partly due to fears of returning US sanctions. As such, the administration of President Hassan Rouhani on April 10 implemented what it called a rate unification policy in order to prevent further depreciation of the national currency. Market fears were found to be justified when US President Donald Trump on May 8 decided to withdraw from the Joint Comprehensive Plan of Action. At the time, this author argued that the rate unification was a last resort that could prove to be a step in the right direction, if implemented correctly. Fast forward to the present, and the rate unification is full of holes as a result of the administration’s misguided approach.

Indeed, there was never truly a unification of Iran’s dual exchange-rate regime. The government unilaterally set the exchange rate of the US dollar at 42,000 rials and simply ignored the open market rate, which valued the dollar almost 50% higher at the time of the rate unification. By branding any exchange of foreign currency outside the unified rate as tantamount to “smuggling,” the government only transformed the open market into a black market. The latter has since increasingly become a breeding ground for speculative activities. What is more, the rate of the greenback on the black market has jumped from 60,000 at the time of the rate unification to 79,000 rials June 26.

Meanwhile, the government has in effect recognized two rates in addition to its "unified" rate of 42,000 rials. It has been allocating subsidized currencies to essential goods at 38,000 rials — the official rate set by the Central Bank of Iran prior to the announcement of the unified rate of 42,000 rials back in April. More importantly, the government made a crucial mistake when it promised that the unified rate would answer for all currency needs, from essential goods to luxury items. The Rouhani administration did this on the back of repeated claims that the country has a surplus of hard currency and therefore faces no challenge in providing for all the needs of economic sectors in addition to popular demand. But there was simply no need for such a declaration — especially since many pundits, private sector actors and parliamentarians had warned against it — except perhaps to save face and present a strong front in the face of pressure.

Indeed, it quickly became obvious that even with a trade surplus, the authorities cannot possibly meet demand for hard currency at the unified rate. As such, the recent turmoil on the foreign currency market has brought with it several important changes to government policy, including a belated recognition of the black market.

In this vein, the head of the Iran Trade Promotion Organization announced June 12 that exporters will be allowed to sell the hard currency they generate to importers at a negotiated rate as opposed to the unified rate. So far, the government’s expectation that exporters would sell their hard currency earnings to importers at the unified rate has failed to materialize, with some exporters demanding that importers instead pay the black market rate. As such, the new "negotiated" rate will certainly be closer to that of the black market as opposed to the unified rate.

High-ranking officials, including Central Bank of Iran head Valiollah Seif, tried to present their measures in a different way, saying that three groups of "essential goods," "raw materials and intermediate goods" and "goods with lower priority" will be eligible to receive government-approved access to hard currency. But Seif finally confirmed June 25 that a secondary foreign exchange market recognizing the black market rates is to be established in a matter of days. First Vice President Eshaq Jahangiri issued a directive the same day allowing non-oil exporters to provide the currency requirements of the third group — estimated at $5.6 billion — with their earnings. The basis would still be the unified rate, but exporters can now sell their export declarations, pushing the final rate closer to that of the black market. The back-and-forth appears to have been a result of the government’s failure to decide on how to present its latest measures.

But the fact of the matter remains that a true exchange rate unification — an objective that was until recently seriously pursued both by officials and the media — is nothing but a pipe dream at present. In reality, the abandonment of the dual exchange-rate regime April 10 has led to a situation in which Iran will have four rather than two exchange rates.

Albeit characteristically late in arrival, the new measures are surely a step in the right direction. For instance, the new negotiated rate will decrease pressure on the country's hard currency reserves, which need to be safeguarded in the face of harsh sanctions. On the other hand, the move will decrease the massive volume of rent that is now enjoyed by many importers who have access to foreign currency at the unified rate but then sell their goods on the basis of the black market rate.

The negotiated rate, however, has come with another policy change that has raised eyebrows. On June 23, it emerged that the government has outright banned the import of more than 1,300 types of goods. These fall into a fourth category consisting of "non-essential goods with domestic counterparts," with the most important affected imports being foreign vehicles. The aim of the government’s import-substitution efforts appears to be to conserve foreign exchange, with statistics showing that the banned goods account for 8% of total imports.

All in all, the Rouhani administration is certain to make further reforms in coming months to its hastily put-together foreign exchange policy. Indeed, it appears as if it has finally realized that it can't make do with empty declarations that it will meet all demands. Yet it must not be overlooked that it has so far shown a poor track record in terms of making calculated, sustainable and transparent decisions. Looking ahead, it will need to change that attitude for its own sake and the future of Iran.