Rouhani under fire amid second day of protests in Iran

Protests against rising prices and a decline in the value of currency have erupted in Iran for a second day in a row, closing the Tehran bazaar. 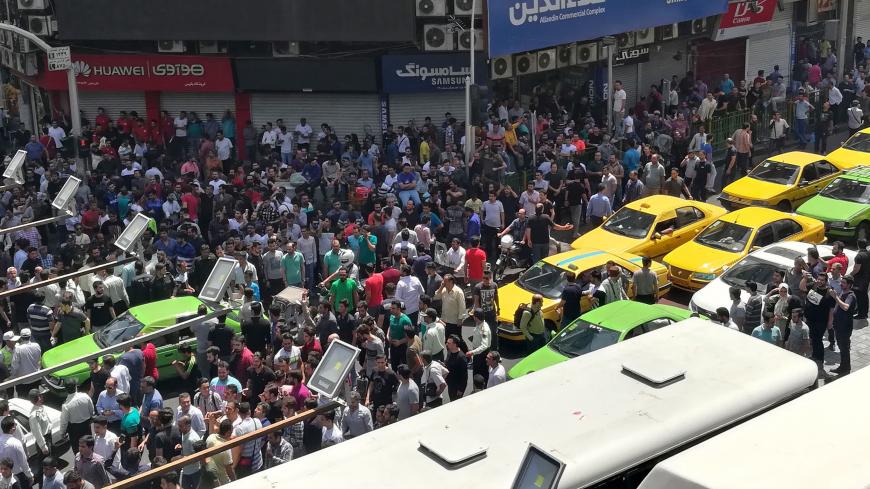 As the unofficial exchange rate in Iran hit a record 90,000 rials to the dollar June 24, a second day of protests erupted in Iran.

On June 24, shopkeepers selling cellphones and computer equipment at two main malls in Iran went on strike over the sudden increase in the unofficial rate — until recently, the black-market, unofficial exchange rate had kept within a fairly stable range from the official exchange rate. Many of the protesters marched toward Iran’s parliament building. On June 25, Tehran bazaar merchants also shut down their shops and staged protests.

While President Hassan Rouhani has not yet publicly commented on the protests, a number of officials from the administration have responded. Mohammad Javad Azari Jahromi, the minister of information communications technology, responded to the protests by cellphone merchants by publishing the names of dealers who had taken advantage of the official government exchange rate and the specific amounts. According to Azari Jahromi, the administration had provided a number of dealers with an exchange rate of 42,000 rials to the dollar, which in essence amounted to a subsidy from the government. He said the total involved in this exchange was 220 million euros ($257 million) but that the dealers had only imported 72 million euros' worth of cellphones.

Some social media users welcomed Azari Jahromi’s publication of individual dealers and seeing how much the businesspeople had benefited from official government exchange rates. The social media users encouraged other government ministers to publish similar lists, hoping that greater transparency would help combat corruption. Fars News, however, wrote that Azari Jahromi’s claim showed the administration lacked oversight in how the official exchange rates were being used.

Iranian journalists also said that around 11 a.m., individuals approached the shopkeepers and told them to close their shops for the day. Some shopkeepers said they believed the orders to close down in protest came from the local mosque.

A government official told domestic media that the Tehran bazaar had returned to calm after the protests. He said that the government would hold meetings with the protesters and that no one had been arrested. Eshaq Jahangiri, Iran’s vice president, also tried to allay fears by claiming that the administration had specific plans in place that even under the most severe conditions, favorable exchange rates for essentials would be provided.

Conservative media reported enthusiastically about the protests. Fars News wrote about the “peaceful protests,” attempting to draw a distinction between these demonstrations and the news agency's condemnation of earlier protests demanding greater social freedoms. As one Iranian journalist noted, however, the protests were not entirely peaceful. The journalist said that while the majority of protests from the Tehran bazaar merchants were apolitical, they were later joined by a group who had shown up with bricks and sticks. This pattern, in which a specific organized protest erupts into nationwide protests, echoes the Mashhad protests of December 2017 in which anti-Rouhani protests erupted into nationwide protests.

The Tasnim News Agency also gave the protests wide coverage. The news agency interviewed conservative parliamentarian Hossein Naghavi Hosseini, who said the administration should be impeached, which the article approvingly used as its headline. More alarmingly, Tasnim News Agency also interviewed former commander of the Islamic Revolutionary Guard Corps and Yahya Rahim-Safavi, who said, “Sometimes it appears that when there is no administration, the country is managed better.” The comment, suggesting that it would be better if there was no president at all, also was chosen as the headline.