The administration of President Hassan Rouhani approved a list of locations for what it brands as "authorized rallies" in Iran's capital, drawing mixed responses. 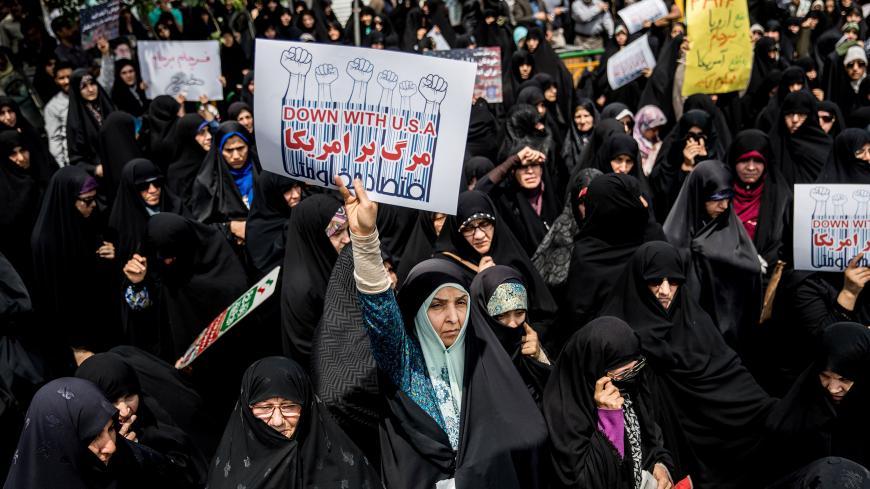 Iranian women gather during a protest against US President Donald Trump's decision to walk out of a 2015 nuclear deal, Tehran, Iran, May 11, 2018. - REUTERS/Tasnim News Agency

In the wake of the nationwide protests that gripped Iran at the turn of 2018, leading to over two dozen deaths and putting hundreds behind bars, President Hassan Rouhani was among the few within the ruling elite to express the need for “authorized protest sites.” After a few months, the idea now seems closer to being translated into action.

During a June 10 Cabinet meeting, the administration ratified a detailed plan specifying such venues in the capital city of Tehran, ranging from large stadiums to popular parks and even one site just outside the parliament’s premises. The decision was, in a way, an amendment to an existing law enshrined in Article 27 of the Iranian Constitution, allowing “peaceful and unarmed” rallies if they are in no breach of “Islamic principles.” What the government approved was also a proposal originally drafted by Tehran’s city council only a few weeks following the December-January protests.

As is the case with any other controversial issue in Iranian politics, reactions to the move have been mixed. An outspoken critic of nearly every step the Rouhani administration takes, the hard-line paper Kayhan, did not hesitate to hit back. On its June 12 front page, the newspaper questioned the importance and timing of the plan, reminding the government to prioritize its duties. “Providing appropriate locations for legal public rallies is a positive step. But the question is whether this is the nation’s real demand and concern these days,” the article said.

Citing what it said to be the latest figures on skyrocketing inflation, unemployment, recession, untamed imports, currency devaluation and industrial bankruptcy, Kayhan wondered if the Rouhani government is by any means aware of people’s pressing problems. The paper described such steps as “riding the wave of people’s demands” — a corollary to the "issue of Charter on Citizens’ Rights that Rouhani took advantage of during his [2017] re-election campaign.”

At the other end of the political spectrum, the Cabinet decision — although welcomed — was seen as clouded with ambiguity. The Reformist newspaper Etemad hailed it as a step toward recognizing people’s right to peaceful protests. It cited observers, however, as casting doubt on a true implementation of the plan. Ghasem Mirzaei Nikou, a lawmaker representing Tehran, contended that demonstrators need to be given security assurances so that that they would not face persecution after attending rallies at designated venues.

“Iranian Hyde Parks” is how the Reformist Shargh daily titled its coverage of the story, alluding to a much older plan tabled by moderate heavyweight politician Ali Akbar Nategh Nouri. Quoting a memoir by the conservative-turned-moderate cleric, the article refers to pushes Nategh Nouri made during his tenure as parliament speaker (1992-2000) when he proposed that a location outside the parliament be allotted for public protests, modeled on the Speakers’ Corner in London’s Hyde Park.

Under current Interior Ministry regulations, authorization is granted merely to rallies organized by officially recognized political organizations, requiring prior detailed notice that must restrictively clarify almost every aspect of the event, ranging from the content of speeches and slogans to the final statement to be issued.

The Islamic Republic’s handling of demonstrations has by and large been characterized by double standards. In contrast to anti-government turmoil and riots, pro-establishment gatherings are commonly applauded by state media as spontaneous, which practically makes them exempt from formal authorization. Now, Shargh’s editorial has raised the question on how things will proceed “if the protests, like the ones that hit the country in December and January, are led by the public and not the officially recognized political organizations.”

To what extent the Interior Ministry and other institutions may manipulate "authorized" rallies, what bureaucratic hurdles will remain and what level of safety protesters might enjoy at such venues are questions that are left unanswered for the time being.