How Trump could spark 'national reconciliation' in Iran

Former President Mohammad Khatami, sensing that the threat from US President Donald Trump is real, called for national reconciliation. 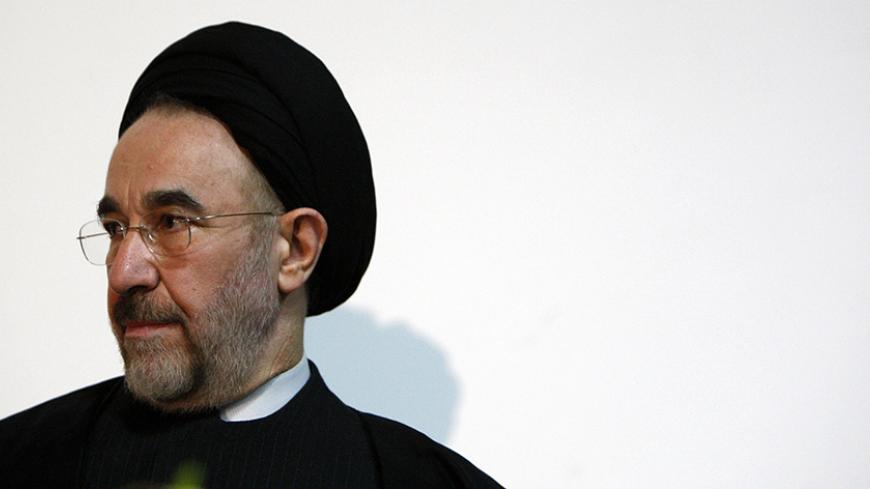 With the advent of President Donald Trump, Iran finds itself on familiar ground: facing sanctions over its missile programs and an American president who is promising “all options are on the table.” With the Trump administration, the possibility of direct military conflict seems more likely. Former President Barack Obama’s outreach to Iranian leaders and his assurances that the United States was not interested in regime change assuaged fears such that Supreme Leader Ayatollah Ali Khamenei consented to a nuclear deal and limited bilateral negotiations. Trump’s hard line against Iran not one month into his presidency, however, will force Iran’s leaders to recalibrate the best strategy to respond to this burgeoning threat domestically. And voices in Iran who are in favor of de-escalation will need to try much harder to make themselves heard.

One of those voices will certainly be former President Mohammad Khatami. During a speech to war veterans and former prisoners of war Feb. 7, Khatami called for “national reconciliation” given that Iran is facing an uncertain future with a Trump presidency. The Reformist president who led Iran from 1997 to 2005 described Trump’s mentality as “very extreme, harsh and quarrelsome.” He warned that the combination of Trump and Republican control of Congress poses “problems and dangers” for Iran.

According to Khatami, while much of world opinion and many Americans are currently opposed to Trump, this could gradually change over time. He urged Iranians to not make mistakes or give excuses to the Trump administration to garner international support to launch attacks on Iran. Given the uncertain predicament Iran is in, Khatami concluded that “this is the best time for an environment of national reconciliation” to prevail inside the country and for everyone to stand together.

Khatami, who has been under an official media ban after siding with the Reformists during the 2009 contested elections, has remained one of the more popular politicians in Iran. His support for Hassan Rouhani in the 2013 election was one of the key factors in getting the uncharismatic long-time government bureaucrat elected into office. With many Iranians not yet seeing the economic benefits of the nuclear deal, the leaders of Iran’s 2009 Green Movement still jailed and many activists from those protests exiled or sidelined, a national reconciliation project is one of the few steps that could open up political space for those sidelined.

Ali Bagheri, the former deputy secretary of the Supreme National Security Council and one of the top nuclear negotiators under President Mahmoud Ahmadinejad, criticized those who expressed support for Khatami’s idea of national reconciliation, particularly under the excuse that it is necessary under foreign threats. According to Bagheri, those who were part of the 2009 protests against Ahmadinejad's re-election were part of the “enemy’s camp.”

The timing of Khatami’s speech is important not only because it comes shortly after Trump entered the White House, but also because it took place at a time when Reformists are publicly debating replacements and vying for influence in the absence of their greatest benefactor, the late Ayatollah Akbar Hashemi Rafsanjani. Reformists, and to a large degree moderates, are without a single voice who can speak forcefully and loudly to push for compromise and de-escalation.

The search for a similar voice who is unafraid to criticize Iran’s hard-liners will likely be a long one. Various Reformists have presented their own ideas on how to replace Rafsanjani’s role. Ali Akbar Nategh-Nuri, a former speaker of parliament and interior minister, urged Reformists to come back into the fold, to resolve differences quietly and “know the value of the revolution and the supreme leader.” Tehran professor Sadegh Zibakalam believes that someone of Rafsanjani’s stature cannot be replaced, and therefore Reformists need to convene a leadership council consisting of Khatami, Nategh-Nuri, Seyyed Hassan Khomeini and Abollah Nouri.