During a visit to Israel, Yahya Staquf, leader of the world’s largest Islamic organization, expressed his vision for the peaceful resolution of the Arab-Israeli conflict and his strong support of the Palestinian cause. 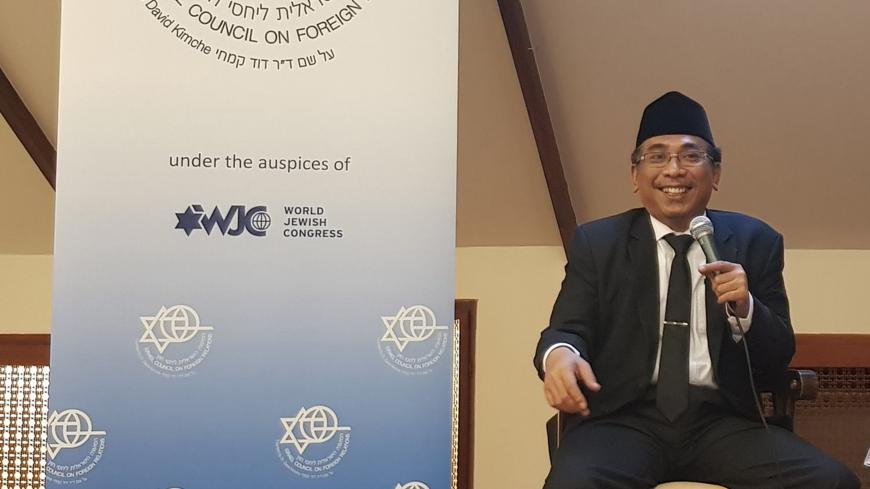 Yahya Staquf, an Indonesian cleric and secretary-general of the Jakarta-based Nahdlatul Ulama (NU), the world’s largest Muslim organization, believes that “rahma,” meaning “compassion” or “mercy” in Arabic, can provide the basis for a political solution to the conflict between Israel and the Muslim world.

Leading a small group of Indonesian Islamic scholars, Staquf was in Israel from June 10-13, invited to speak at the American Jewish Committee's annual Global Conference, which was held in Jerusalem. During his stay, Staquf met briefly with Prime Minister Benjamin Netanyahu; spoke at several forums, including at the Israel Council on Foreign Affairs and the Hebrew University; visited with a delegation of Women Wage Peace, an Arab-Jewish peace group; and was guest of honor at a song fest at the Tower of David in Jerusalem’s Old City, where he delivered a convocation of peace together with a priest and a rabbi.

Indonesia and Israel do not maintain diplomatic relations, but according to the Israeli Ministry of Tourism, some 30,000 Indonesians, mostly Christian pilgrims, obtain visas to visit Israel each year. In addition, several dozen Israelis visit Indonesia, mostly for business purposes. Staquf repeatedly emphasized that his was a “private visit.” Yet, given his position as an adviser to Indonesian President Joko Widodo and Staquf's leadership of the Nahdlatul Ulama — a Sunni group founded in 1926 and with more than 50 million registered members — his visit stood to have political implications, especially as Indonesia continues its efforts to assert itself in world politics, including in attempts to resolve the Arab-Israeli conflict.

Diminutive, with a gentle appearance, Staquf wore a religious cap and most often dressed in Western attire, only occasionally wearing an Indonesian-style shirt. He speaks softly yet decisively.

Using a metaphor, he explained his concept of rahma to Al-Monitor. “If a person is sick with diabetes or heart disease, he will not gain any advantage from medication unless he changes his lifestyle,” Staquf said. “The ‘lifestyle’ of this conflict must change, too. We have tried everything — negotiations, talks, maps, and constant conflict. If operationalized as a political tool, rahma could be a new start.”

Staquf visited with Netanyahu, although their meeting was not listed on the prime minister's official schedule. A knowledgeable source told Al-Monitor that the meeting had been hastily arranged. The Prime Minister’s Office said in a press release that Netanyahu had told Staquf, “Muslim states are becoming closer to Israel because of the common struggle against the Iranian regime and because of Israeli technology. … The prime minister hopes that there will be progress in our relationship with Indonesia, too.”

In an interview with Al-Monitor, Staquf said, “I am a religious man, but I am not naive. Political leaders must find solutions, but only if they bring rahma to their negotiations will they ever find those solutions.”

He emphasized that he was not in Israel as a government representative, but that Widodo was “aware” of his visit. “My country wants to promote relations between Israel and Indonesia,” Staquf said, “because the conflict is part of complex world problems that must be dealt with comprehensively in a global manner. But for there to be full normalization between Israel and Indonesia, the world’s largest Muslim country, Israel must also address the global context of the problem and recognize that it must make peace with its Muslim neighbors.”

During the interview, as in his speeches, Staquf also expressed his strong support for the Palestinian cause. “It must be obvious that I stand by Palestine and the Palestinian people. What else could be expected from an Indonesia Muslim like me? I stand here on the basis that we all have to honor Palestine’s sovereignty as a free country.”

Staquf's visit to Israel, however, was denounced in Indonesia, especially on social media. Before his trip, the Indonesian government had canceled all Israeli visas to protest the recent killings of Palestinians by the Israeli military on the Gaza border. “The Palestinian ambassador to Indonesia personally asked that I not come,” Staquf said. “They do not understand that my message of rahma is for the good of the Palestinians.”

Giora Eliraz of the Henry M. Jackson School of International Studies at the University of Washington and the Truman Research Institute at the Hebrew University said Staquf’s visit must be viewed in terms of Indonesia's domestic and international contexts. “Within the Muslim community, there is a struggle between moderates and conservatives over the nature of Indonesian Islam and its manifestations in political and social structures, institutions, and culture. Opposing factions have two very different views for the future of Indonesia: one side, which Staquf represents, wants to continue the democratic Indonesia of today, where no religion has primacy over another, while the other wants a state that reflects the majority Muslim demographic by being governed under Islamic law. That [latter] side tends to support the Palestinian cause very strongly.”

The Palestinian Authority also denounced Staquf’s visit. Fatah spokesman Osama al-Qawasmi said in a June 11 press statement, “The participation of an Indonesian delegation of religious scholars in a conference of the American Jewish Committee in occupied Jerusalem is a crime against Jerusalem, against the Palestinians and Muslims in the world, and constitutes support for the criminal Israeli occupier against our fighting and resolute people.” Qawasmi demanded that senior Indonesian officials and the Indonesian people “settle the account with those who have sold their souls to the devil and agreed to serve as pawns in the hands of the Zionists and Israelis.”

Staquf met in Jerusalem with Mohammed Dajani Daoudi, founder of the Wasatia movement, which is similar to the Nahdlatul Ulama in outlook. Dajani, who in 2014 lost his position at Al-Quds University after taking a group of Palestinian students to Auschwitz, responded sharply to the official Palestinian position. “Why do we not embrace this visit and consider it a step toward peace, reconciliation, rapprochement and dialogue between religions at a time we are in urgent need of a glimmer of hope?” Dajani said to Al-Monitor. “Because of our condemnation of the visit, the Indonesian religious scholars have heard only the Israeli view. ... We did not listen to their ideas and their call for mercy, love and peace.”

On a more personal level, Staquf spoke almost ecstatically about his visit to the Temple Mount/Haram al-Sharif, and unusually, had difficulty articulating the depth of his experience. “Ahh, as a Muslim, to pray at this holy site, just to be there. … The feeling went into my soul. I do not have words,” Shaquf said.

He acknowledged that efforts to bring religion into the political arena could sometimes be problematic. “Too often, religion is used as a justification for conflict. In Islam, like in so many other religions, it is possible to interpret certain texts and hadiths [acts or statements of the Prophet Muhammad] in a problematic way,” he said. “The Quran and hadiths were written in the context of reality at the time. They are historical documents that contain the canons of morality to guide us in spirit. … As the reality changes, the manifestations of that spirit must change, too.”

Eliraz said of Shaquf’s teachings, which weave traditional Indonesian tolerance into Islam, “are very controversial, especially since Indonesia is located on the geographic periphery, far from the centers in the Middle East considered to be most central to the development of Islam. He is a very brave man, navigating very stormy waters, always having to carefully balance between opposing forces, condemning terrorism while asserting his loyalty to the Palestinian cause. … But until there is a resolution to the conflict, and a Palestinian state is established, Indonesia and this form of Islam cannot take a leading role.”

Staquf concluded, “Hopefully, my teaching of rahma will help to move something toward the positive.”