Sisi surrounds himself with generals in latest Cabinet reshuffle

The Egyptian government has seen a major Cabinet reshuffle, with most of the newly appointed ministers coming from a military background. 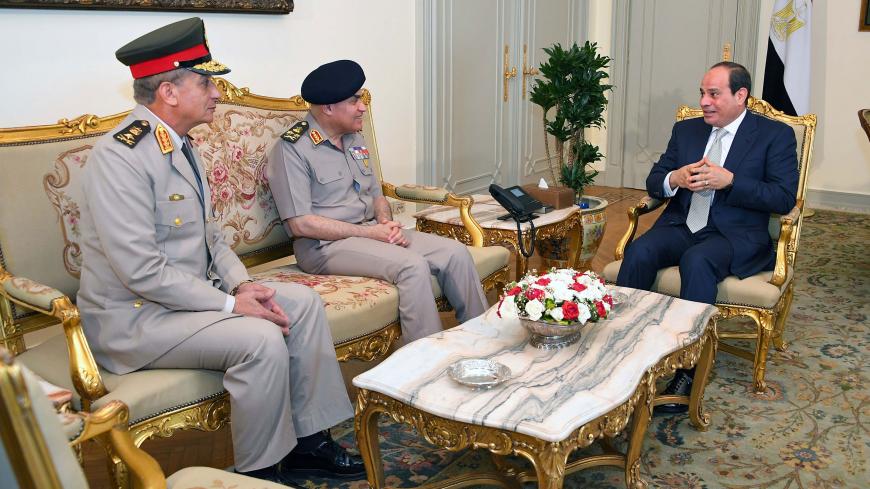 CAIRO — Egyptian President Abdel Fattah al-Sisi met with newly appointed Defense Minister Gen. Mohamed Ahmed Zaki June 19 during their first one-on-one meeting since Zaki was sworn in. In a brief statement issued that day, the Egyptian presidency said that Sisi had received the new defense minister yet did not give details of the meeting.

The Egyptian government has witnessed a major reshuffle with the appointment of Zaki as defense minister and Maj. Gen. Mahmoud Tawfik as interior minister. This is in addition to other newly appointed ministers from military backgrounds, including Lt. Gen. Younis Hamed al-Masri who took office as the minister of aviation and Maj. Gen. Mahmoud Sayed Abdel Hamid Shaarawi who was appointed minister of local development after having served as chief of national security.

“It is clear that Sisi is not reassured and is apprehensive about the future. This is why he made the changes in the ministries of defense and interior. It seems that his circle of trust is falling apart. The pertinent question, however, is will this Cabinet reshuffle bring stability to the state institutions?” Hazem Hosny, a political science professor at Cairo University, said in a Facebook post June 14.

The appointment of a new defense minister comes amid a major military operation to combat terrorism launched by the Egyptian army in February as a response to a November 2017 terrorist attack on a mosque in southern Sinai. The attack killed more than 300 people. One month later, the ministers of defense and interior were targeted in a bloody attack during a visit to Al Arish International Airport in northern Sinai, which killed one officer and wounded two others.

Tamer al-Shahawi, a member of the National Defense and Security Committee of the Egyptian parliament, believes that the Cabinet reshuffle was based on an assessment of the security level of the past period, which necessitates pumping new ideas that are commensurate with the management of the next phase.

Shahawi, a former intelligence officer, told Al-Monitor via phone that the current situation requires the development of a security vision at home, expecting the Interior Ministry to witness major changes at the leadership level.

“It is important for the Egyptian leadership to realize that security is not about the number of soldiers, but relies on modern military technology and equipment,” he said.

Shahawi added that appointing Shaarawi as minister of local development after having served as intel chief aims to enforce discipline in local administrations fraught with corruption. Similarly, Masri was assigned to the Ministry of Aviation as the debts of the ministry have greatly increased with persisting failures in management, according to Shahawi.

Of note, former Minister of Local Development Abu Bakr al-Gundi served as a lieutenant general in the Egyptian armed forces before taking over the ministry in early 2018.

Egyptian tourism suffered a severe blow in October 2015, following the crash of a Russian plane carrying more than 200 tourists.

“Egypt’s problem with its successive governments is not about Cabinet reshuffles as much as it is about the lack of a clear, well-defined strategy and enforceable visions. We need new policies, not new Cabinets,” said Imad al-Din Hussein, editor-in-chief of the Egyptian daily Shorouk News.

Hussein perceived that the objective behind the Cabinet reshuffle is to move forward with the International Monetary Fund’s economic plan for the country and bring about security to Sisi’s liking. He viewed that Sisi’s second and last term is not going to be challenging.

He pointed out that the previous government has greatly failed in handling the economic crisis that hit the country for years.

Hardly two days had passed since the Cabinet reshuffle when the government announced June 16 an increase in fuel prices up to 66.7% as part of its plan to cut spending on energy subsidies. This is part of the economic reform plan agreed to by Egypt and the International Monetary Fund, which prompted the Civil Democratic Movement to denounce the harsh government decisions.

In a statement June 17, the movement said, “We warn state officials against the consequences of these unjust policies, which pose great dangers. The majority of the people can no longer bear [such decisions], which could lead to an impulsive uprising with significant magnitudes.” The movement also demanded the government retract the decision immediately.

In the same vein, the 25-30 Alliance, a bloc comprising several independent parliamentarians, announced June 17 its rejection of the new government and the economic decisions, denouncing them as wrong. The alliance called for a national conference that would include all political forces to develop an alternative economic and political plan within two months.

Former presidential candidate and humanitarian lawyer Khaled Ali tweeted June 16, saying, “The people are stuck between an oppressive dictatorship and failed economic options that have burdened us with corrupt debts and unfair conditions. The poor and middle classes are paying dearly for their freedom and dignity. Things will continue to worsen until the people and movements decide to speak up and stand for their rights.”

Moreover, Egyptians bristled at the sharp increase in subway fares. Protests were held outside the metro station in May.

Egypt had banned protests in October 2013 and forced those who wanted to stage protests to obtain a permit from the Interior Ministry. Sisi's opponents have accused him of overseeing the worst crackdown on freedoms in Egypt's modern history.

In June, the United Nations warned of a "major escalation" in the security campaign inside Egypt.