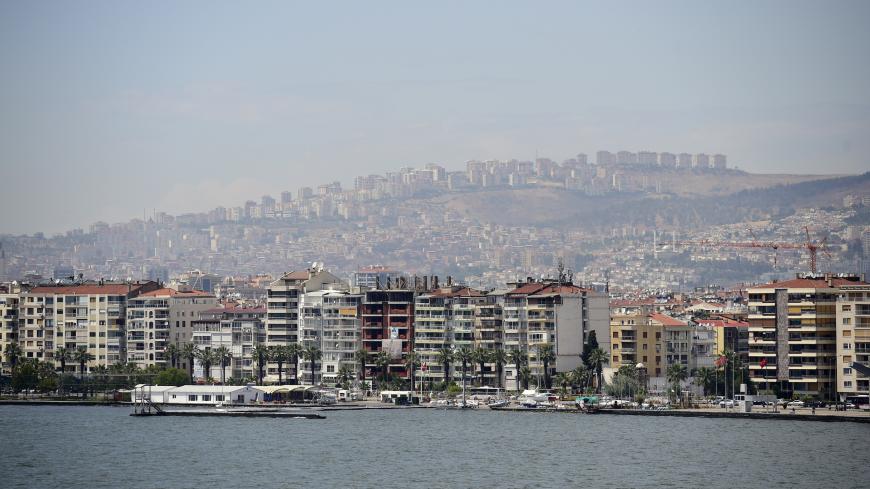 When a list of the world's cities with the most rapid property price increases in 2017 was released last month, it came as little surprise that trendy Berlin was on top.

A matter of intrigue, however, was the second name on the list: Izmir, Turkey's third largest city, where prices surged by 18.5% last year. Flanking the Aegean coast, the city itself and the greater Izmir province have witnessed an intense wave of internal migration over the past couple of years, spiking prices and increasing speculation.

Many of those settling in Izmir are coming from Turkey's largest city of Istanbul, which for decades was known as the primary sought-after destination for migrants from throughout the country, ballooning in size and population. But between 2015 and 2016, according to official figures, the number of people leaving the city was 70,000 higher than those moving to it.

Turkish media reported earlier this year that more than 18,000 people left Istanbul for Izmir in 2017 and that a major segment of this group consists of white-collar, educated folks. In 2016, 16,000 people made the move. In what has been dubbed a brain drain, researchers have pointed to “traffic, extreme concretization and decelerated social interaction” as the primary reasons why people are abandoning Istanbul and opting for Izmir.

Meanwhile, locals of Izmir are concerned that this wave of immigration may begin to negatively impact their own lives.

“Since the job market here is considerably weaker than in Istanbul, some people face dangers, like being priced out of their neighborhoods,” said Ali Kincal, a lifelong Izmir resident who just completed his master's degree in EU studies at the city's Dokuz Eylul University.

Kincal said that while riding a city bus, he overheard a resident of the idyllic town of Urla, located 40 kilometers (25 miles) to the south of Izmir, complaining of the influx of new arrivals.

“As I see it, there are new and very expensive projects everywhere, and many buyers — maybe most buyers in extremely luxurious projects — are not from Izmir,” Kincal said.

A pleasant city stretching around a gulf linked to the Aegean, Izmir and its surroundings have a reputation as Turkey's secular stronghold. In the November 2015 general elections, 46% of the provincial electorate voted for the main opposition Republican People's Party, while just 31% cast their ballots for the ruling Justice and Development Party. In last year's referendum, 68% voted in opposition to the transition to a presidential system endorsed by President Recep Tayyip Erdogan.

Izmir province hosts some of the country's most popular vacation destinations, including the beach town of Cesme and the picturesque Alacati, with its beautiful sand-colored stone houses. The city of Izmir is a short drive from these places and features an urban lifestyle that is vibrant but not nearly as chaotic as Istanbul.

On a recent Sunday evening in Alsancak, Izmir's main entertainment district, side streets lined with bars and restaurants, many of which have recently opened, were buzzing and packed to the gills with a mostly younger crowd. It was clear that there had been a major rejuvenation in the area. Just steps away, throngs of people assembled on the Kordon promenade, sipping beers, eating sunflower seeds and enjoying the view.

With a population of 3 million, Izmir has also experienced sprawl over the years, and it is home to huge shantytowns spread across hillsides, a number of which are not far from the city center. The precarious status of these shantytowns, when considered alongside the heavy interest surrounding the city, will likely to lead to their flattening in favor of more expensive housing. This is a process that has already been in motion in Istanbul for years, resulting in significant physical and sociological transformations.

Major transportation improvements are also on the way for Izmir, with a highway between the city and Istanbul expected to be finished in 2019, aiming to slice the length of a car trip from nine hours to under four. A high-speed train line connecting Izmir and the capital of Ankara is slated to be up and running in 2020. During a recent meeting, Izmir Mayor Aziz Kocaoglu boasted of the considerable additions to public transit in the city made over his 14-year tenure, which has included lengthening the metro system, introducing a suburban line that continues to expand and adding tramway networks.

As thousands of people grow weary of life in Istanbul, with its high prices, terrible traffic, overcrowding, endless construction and few green spaces, Izmir and nearby provincial towns have become increasingly attractive. Though this has inevitably driven up prices and resulted in major changes, locals aren't likely to go anywhere anytime soon.

“People have a different sense of regional identity here. Usually they intensely like their city even though they don't stop complaining about it,” Kincal said.