Turkey recalls envoys from US, Israel over Gaza violence

Tensions between Turkey and the United States and Israel have hit new heights as politicians across the Turkish political spectrum furiously denounce the treatment of Palestinian civilians during the ongoing protests at the Gaza border. 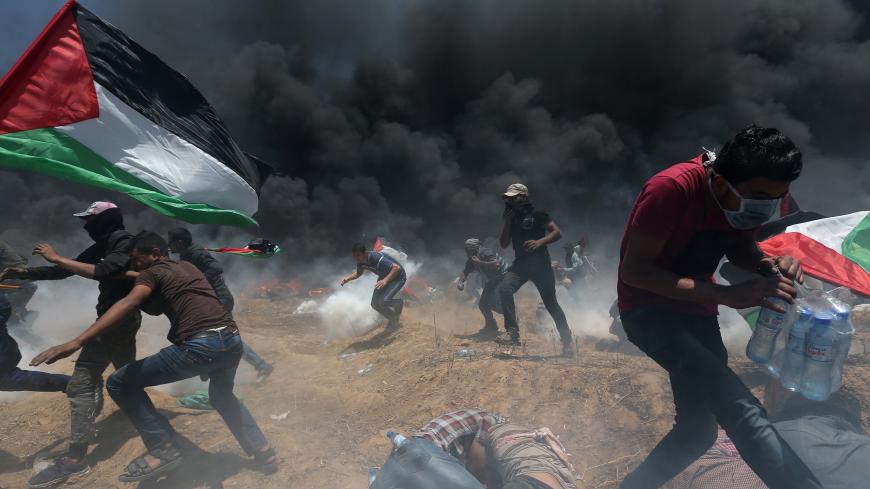 Palestinian demonstrators run for cover from Israeli fire and tear gas during a protest against the US Embassy's move to Jerusalem and ahead of the 70th anniversary of the Nakba at the Israel-Gaza border in the southern Gaza Strip, May 14, 2018. - REUTERS/Ibraheem Abu Mustafa

Turkey has recalled its ambassadors to the United States and Israel and asked the Israeli ambassador in Ankara to leave “for a while” in formal protest of Palestinian civilians in the Gaza Strip killed by Israeli forces while demonstrating against the US administration’s decision to relocate its embassy to Jerusalem.

Turkish President Recep Tayyip Erdogan, who is in the United Kingdom on an official visit, termed the Gaza killings “genocide” and called Israel a “terror state.” Ankara has declared three days of official mourning and offered to fly in wounded Palestinians for treatment. Erdogan is widely hailed in the Muslim world as one of the most vocal champions of the Palestinians. Arab heavyweights Egypt, Saudi Arabia and Jordan have been visibly more restrained not least because of their aversion to the Muslim Brotherhood-inspired Hamas, which governs Gaza. Erdogan called US President Donald Trump’s decision to move the embassy to Jerusalem a “mistake” and “violation of international law.” Washington, he argued, has thus forfeited its role as an honest broker in the Middle East peace process. Turkish government spokesman Bekir Bozdag said, “The blood of innocent Palestinians is on the hands of the United States.”

Tensions between Turkey and Israel continued to escalate as Israel told Turkey's de facto ambassador in Jerusalem, Gurcan Turkoglu, to go home. Israeli Prime Minister Benjamin Netanyahu took to Twitter to air his anger. He called Erdogan one of Hamas’ “biggest supporters” and charged that there was “no doubt” the Turkish leader “well understands terrorism and slaughter.” He added, “I suggest he not preach morality to us.”

Erdogan riposted, “Netanyahu is the PM of an apartheid state that has occupied a defenseless people’s lands for 60+ years in violation of UN resolutions. He has the blood of Palestinians on his hands and can’t cover up crimes by attacking Turkey. Want a lesson in humanity? Read the 10 commandments.”

Erdogan’s stance will likely deepen the rift with Washington amid calls from the Hill to slap sanctions on Turkey over what several senators have termed the “unlawful” detention and “hostage-taking” of US citizens and Turkish nationals working at US diplomatic missions and its plans to purchase Russian S-400 missiles. But it will raise Erdogan’s stock on the Arab street and more critically back at home in the run-up to the June 24 presidential and parliamentary elections. Across Turkey, thousands of people chanting anti-Israeli slogans have taken to the streets to protest the Gaza deaths.

Soner Cagaptay, who runs the Turkish program at the Washington Institute for Near East Policy, believes that Erdogan’s rhetoric will do little to leaven the plight of Gazans. “Erdogan will nevertheless use the Gaza issue to the fullest extent in Turkish politics, starting with a massive protest in Istanbul on Friday, to rally his conservative base around him,” Cagaptay told Al-Monitor. “After 16 years of Erdogan rule, at least some of the conservatives in Turkey are showing signs of [ruling Justice and Development Party] AKP fatigue. Foreign policy matters with little domestic cost — such as the Israeli-Palestinian conflict and tensions with Greece — could help Erdogan bring his tired base back to his fold.”

But some may well question his sincerity. Today, AKP lawmakers voted down an opposition motion to scrap a raft of agreements with Israel, Republican People's Party (CHP) parliamentarian Ali Seker revealed in a tweet. Critics point out that even after Turkish-Israeli relations hit a nadir over the Mavi Marmara flotilla incident in 2010 leading to the deaths of nine Turkish citizens at the hands of Israeli commandos, Turkish-Israeli trade continued to expand with Turkey exporting cars, iron, steel, jewelry and plastics to Israel, which sold fuel and oil in return. The volume of trade hit $4.9 billion last year. In 2016, Erdogan suggested he had been opposed to the Mavi Marmara flotilla’s ill-fated mission to carry aid to Gaza, saying his permission had not been sought.

Turkey’s opposition leaders are in any case determined not to let Erdogan monopolize the Gaza tragedy. Sporting a Palestinian-style scarf, main opposition leader Kemal Kilicdaroglu echoed many of Erdogan’s remarks, telling CHP members in the parliament that the United States had planted “a hand grenade in Jerusalem, the heart of the Middle East.” The Turkish people “will stand by the Palestinian brothers for eternity,” he vowed. Kilicdaroglu also lashed out at Arab governments, saying they had failed to unite in defense of the Palestinians. “There exists no greater shame in history,” he fumed.

In a rare sign of unity, the AKP, the CHP and far-right nationalists issued a joint declaration condemning Israel and the United States. Meanwhile, Selahattin Demirtas, the imprisoned presidential candidate for the largest pro-Kurdish bloc, the Peoples' Democratic Party, called for a common stand among all the candidates against what he termed in a tweet the Israeli government’s “limitless barbarity.”