Pompeo calls for review of security assistance to Lebanon

The State Department and congressional hawks are taking a second look at US support for the Lebanese Armed Forces after Hezbollah and its allies won a parliamentary majority in this month’s elections. 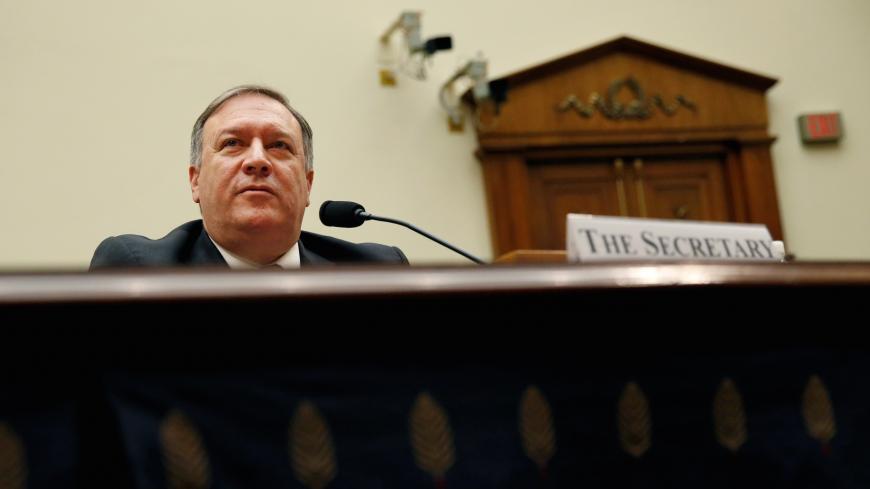 US Secretary of State Mike Pompeo testifies at a hearing of the US House Foreign Affairs Committee on Capitol Hill in Washington, May 23, 2018.

Mike Pompeo used his first official appearance before Congress as secretary of state to call for a review of US military assistance for Lebanon following Hezbollah’s gains in this month’s elections.

Washington has long relied on the Lebanese Armed Forces as a bulwark against the Iran-backed Shiite paramilitary group’s influence in the divided country. But critics of the army’s unwillingness to confront the group, which plays a dominant role in Lebanese politics, are gaining traction as the Donald Trump administration pursues a more aggressive stance against Tehran.

“We need a review … to make sure that we’re using American tax dollars right in supporting the groups that can most likely achieve our outcome there,” Pompeo testified before the House Foreign Affairs Committee today as the Trump administration weighed in on a simmering debate about Lebanon.

“That’s the first time the administration openly mentioned some things related to a review of the use of the LAF [Lebanese Armed Forces] aid,” Joseph Gebeily, the president of the Lebanese Information Center, a think tank critical of Hezbollah, told Al-Monitor. “The Lebanese Armed Forces have been a very useful partner to the US military. They’ve built a good relationship.”

Some Hezbollah hawks in Congress have long called for curtailing US support for the Lebanese Armed Forces, saying the Hezbollah paramilitary group exerts undue influence on the Lebanese military.

“I’ve long been concerned over reports of the LAF-Hezbollah cooperation and US commitment to the LAF,” Rep. Ileana Ros-Lehtinen, R-Fla., the chairwoman of the House panel on Middle East policy, said earlier this week at a hearing reviewing Hezbollah’s electoral gains. “US law stipulates that no assistance may be made available to the LAF or Lebanon’s Internal Security Forces if they are controlled by a US-designated foreign terrorist organization. Hezbollah certainly [qualifies].”

“I hope that this administration, unlike previous administrations from both parties, takes a clear-eyed approach to the LAF [and] reassesses our security assistance to Lebanon,” she added.

Still, some Republican lawmakers who have voiced similar concerns nevertheless cite the Lebanese Armed Forces as an important tool in curbing Hezbollah’s influence in Lebanon, even as the paramilitary group expands into Syria.

“We have worked closely with the Lebanese Armed Forces over the years to try to strengthen that institution because basically you have the formulation of a terrorist state within a state,” House Foreign Affairs Committee Chairman Ed Royce, R-Calif., told Al-Monitor following Pompeo’s testimony. “So we want to make certain that there is distance between the Lebanese Armed Forces and the capability of the terrorist network to get their hands on any material. And that is what I believe [Pompeo’s] referring to.”

However, Gebeily said that while the Lebanese Armed Forces have been effective in ensuring Lebanon’s security, a review of their objectives is warranted as they have failed to disarm Hezbollah.

The Lebanese Embassy in Washington did not immediately respond to a request for comment.

“The taxpayer is asking: Is my assistance, the money I’m giving … to the LAF, disarming Hezbollah?” said Gebeily. “It’s not, so maybe we should review the objective of this assistance to make it more in line with what’s being achieved. If it has the purpose of disarming Hezbollah, then we should see how this can be implemented.”

While Pompeo himself has a reputation as a hawk, singling out Hezbollah in a hard-line Iran strategy speech earlier this week, his stance on the Lebanese Armed Forces has historically been more nuanced.

Gebeily, who said he formed a relationship with Pompeo during his time as a congressman from Kansas, said that while Pompeo has always been “very tough on Hezbollah and Iran,” he was also “supportive of the LAF, strengthening state institutions overall — of course with the objective of weakening Hezbollah.”

As a member of Congress, Pompeo’s district included Wichita, which boasts a sizable Lebanese American population. During that time, he made at least two trips to Lebanon, in 2014 and 2015, as a member of the House Intelligence Committee.

A readout of that first trip says Pompeo “reaffirmed US support for Lebanon’s security and political institutions.” And on his second trip, Pompeo met with Michel Aoun, now the country's president but who at the time was a Hezbollah-allied member of parliament.

Despite calling for a review, Pompeo still reaffirmed, in his testimony today, US support for the Lebanese Armed Forces “to help us achieve the security element of our efforts.” And although he expressed concern about Hezbollah’s strength in the Lebanese government, he conceded that “ultimately it’s our assessment at this point that the overall balance of power won’t be materially changed” by this month’s elections.