"In the Tunnel," a satirical play by Israel's Gesher Theater, asks its audience to decide every night if there is hope for a solution at the end of the Israeli-Palestinian conflict. 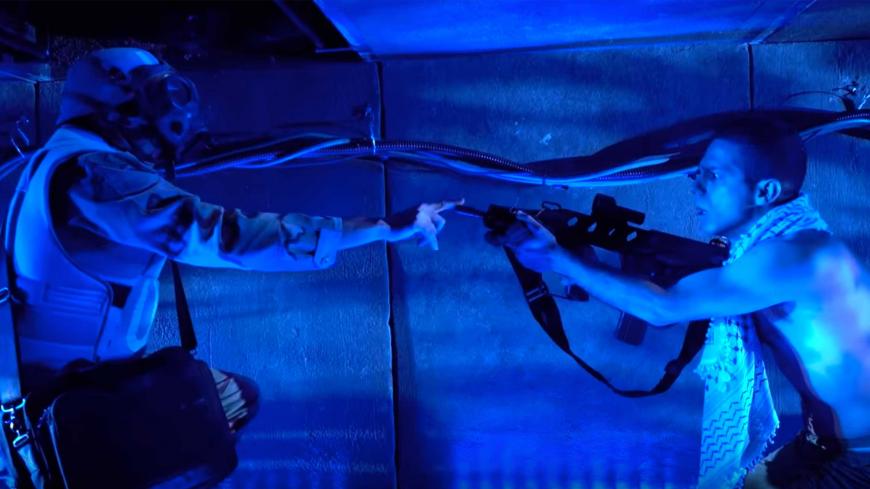 A scene from the play "In the Tunnel," performed at the Gesher Theater, Tel Aviv, Israel, seen in a still from a video uploaded Jan. 10, 2017. - YouTube/Gesher Theatre

This is the opening line of “In the Tunnel,” an insightful satire about the Arab-Israeli conflict whose impact has become even stronger since the surge in violence in the Gaza Strip since the end of March. Directed by Irad Rubenstein, this political play by Tel Aviv’s Gesher Theater has performed to a full house for over a year. The play is scheduled to travel abroad, mainly to the United States, later this year.

"I hope we irritate everyone, left and right," Rubenstein said. "Because then it will force the audience to really think about what we are doing in this conflict, and especially in Gaza."

The reference to the tunnel is both literal and figurative. The play, written by Roee Chen, takes place in a tunnel, representing a Hamas tunnel dug under the border between Israel and the Gaza Strip in order to enable its militants to penetrate into Israel. These tunnels have become a focal point in the violence between Israel and Hamas in Gaza. As a deliberate unsubtle metaphor, the tunnel offers an in-your-face, frightening, depressing and comical view of the absurdity of the Palestinian-Israeli conflict. The jokes are rapid and often macabre.

The metaphor is played up even before the play begins. Along with the play’s program, each member of the audience is handed a ballot and asked to vote: Will there be any light at the end of the tunnel? The actors act out what the majority decides on.

A group of high school seniors majoring in theater arts at a school outside Tel Aviv were noisily casting their ballots during a performance in mid-April.

“I brought my students to see this play for many reasons,” said Moriah, the teacher in charge, who asked that neither she nor her students be identified with their full names. “I brought them here because as theater students they should see this play — it’s brilliantly staged. I also took them because next year they will be going into the army. This is the reality that they will face — many of them will be posted on the Gaza border. There may be another war in Gaza in the future. The tunnels are real. I want them to think, to be challenged — as theater students, as future soldiers, as citizens.”

Bar said, “I’m a bit anxious about seeing this play. In July I’m going into the army, joining a combat unit. I can vote at this play; I voted that there will not be light at the end of the tunnel, because I don’t think there will ever be an end to this conflict.”

“In the Tunnel” is an immersive experience, with strong lighting, realistic sounds of gunfire and constant action. The stage has two levels: The upper stage is designed as a TV studio where a popular, inane morning show with a ditzy star broadcasts yoga and health food segments. The lower stage is a cross section of a tunnel that runs from Gaza to Israel. Hisham, a Hamas militant; Tzlil, a young Israeli conscript; and Yiftah, a jaded, 40-year-old Israeli reservist commander who just wants to get home in time for his daughter’s bat mitzvah, are fighting it out. Yiftah is wounded and is lying on a mine that, if he moves, will kill them all. The tunnel is blocked on both sides.

As the news of the attack spreads, the yoga studio is hastily converted into a TV news room, where clueless senior military officials, puffed-up Israeli and Palestinian politicians and a hapless United Nations peacekeeper offer useless, empty cliches and care more about their photo ops than they do about the men trapped in the tunnel. Below, Hisham, Tzlil and Yiftah must find a way to coexist as they munch on the grape leaves Hisham's mother has made, then share a few joints and become delightfully stoned.

At this performance, the crowd voted that there would be no light at the end of the tunnel.

“I feel shellshocked,” said Bar as he left the theater. “I laughed a lot — some of the scenes are really, really funny. But it’s an awful kind of funny.”

He hesitated and added, “Since I was little, I have wanted to be a combat soldier. The danger in the tunnel doesn’t scare me as much as the leaders. I am going to risk my life because the leaders don’t care about us, the soldiers, the people. That’s crazy.”

Standing next to him, his friend shook his head. “I voted for the light," Tali told Al-Monitor. "But even before I saw the play, I had been thinking about conscientious objection. If these guys in the tunnel can get along, then why do we need to fight?”

Moriah listened carefully to what her students said. “This is why I brought them here. It is important that they think for themselves, that they challenge their assumptions. This is what good theater should do," she noted.

In response to the question if she is not concerned about demoralizing the students just before their army duty, she said, “Going into the army is compulsory. But no one can tell you what to think about that.”

Rubenstein told Al-Monitor that many high school groups attend the play. “'In the Tunnel’ is political theater, but it’s not didactic and we don’t take a particular political stand. My goal is to make the audience think about the situation and the decisions that the politicians — and we — make,” he said.

Minister of Culture Miri Regev has threatened to cut funding for plays and theater groups that present, in her opinion, anti-Zionist or anti-Israeli messages.

Rubenstein said he is not concerned. “This play is stronger than the politicians,” he noted. “Performances are sold out. The Israeli public wants to be challenged and will not accept the superficiality that politicians like Regev want to force on them.”

He also insisted that “In the Tunnel” is a patriotic play. “I served in the military. As an Israeli citizen, it is my duty to do reserve duty. As a proud Israeli, it is also my duty to raise these issues. As an artist, it is my duty to create good drama,” he concluded.