The number of theaters in the West Bank has doubled in the past decade as the cultural scene booms under occupation. 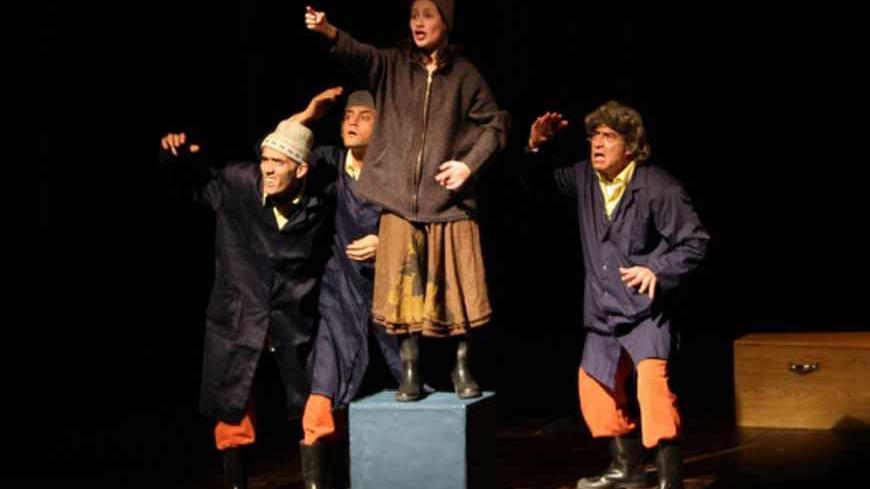 In Al-Kasaba Theater in Ramallah, a group of actors were getting ready to go on stage. In the yellow light of lightbulbs framing the mirrors, actresses Amira Habash, Maisa Abd Elhadi and Shaden Kanboura applied makeup, painting their lips bright red and straightening their hair as they prepared to play American high-society girls in the romantic comedy "Holiday." They laugh as they hear their male counterparts singing and joking in the hall.

“I like this theme because most plays and movies are about the Palestinian cause; there is no variety in the characters we play,” said young Abd Elhadi, who plays Julia Habib, daughter of a rich Palestinian-American businessman who falls in love with an ordinary guy, Jamil Selim, who cares not about money but about enjoying life to its fullest. The spoiled rich girl then has to decide if she is willing to go against her father’s wishes and leave the high-society life to follow love.

The play is originally from the United States and was written in 1928, but the general director of Al-Kasaba Theater, George Ibrahim, altered the characters to be Palestinians to make them easier for the audience to relate to. And though the play isn’t about the Israeli occupation, the play’s themes of love and money are also relevant for Palestinians, as they are for all human beings, said Ibrahim.

“I choose plays that concern society — the next play is about women’s rights. But I thought it was time for a comedy, and maybe next a musical,” said Ibrahim, adding that naturally, politics also dominate the themes of the plays. “You cannot avoid the occupation — it’s controlling us and is present in every part of our daily details. It’s like we are married to it with no way to divorce.”

Ibrahim has run Al-Kasaba Theater first in Jerusalem and later in Ramallah since 1970. And though it’s a struggle to find funding for long-term projects, the theater has survived in a turbulent environment and experiments with many different genres and themes. It is also the only place in the Palestinian territories to offer a three-year degree in drama. But it’s not easy.

According to Ibrahim, people have still not reached a place where they are willing to pay for culture and art. “There’s a lack of this bug I see other places which will drive people to the theater instead of buying cigarettes,” he said, adding that most people just don’t have money because of the current financial crisis in the Palestinian Authority. In many cases, performances like "Holiday" are therefore shown free of charge.

And in spite of the economic and political situations, the Palestinian cultural scene is thriving. Recent numbers from the Palestinian Central Bureau of Statistics show that throughout the past decade the number of theaters has more than doubled, museums have tripled and cultural centers have multiplied seven times from 50 in 2002 to 646 in 2012.

Palestinian Minister of Culture Siham Barghouty attributes the significant rise in cultural venues and activities to the long period of relative calm.

“People want a normal life. Going to the theater or listening to music is part of that — especially among youth,” she told Al-Monitor at her office in Ramallah, adding that during the second intifada in the early 2000s, people couldn’t go out, which killed the cultural scene. But now, 10 years later, the number of people who visit museums or attend lectures, poetry readings or concerts has risen to levels even higher than before the intifada. In Ramallah, colorful posters on every street corner advertise past and upcoming festivals.

According to Bargouty, the Ministry of Culture prioritizes cultural activities in rural areas or cities far from Ramallah where people have fewer opportunities. But she admitted that the ministry doesn’t focus on the Israeli-controlled Area C, which constitutes around 60% of the West Bank, due to Israeli restrictions. She said that even in Jerusalem and in Area B, which is under Israeli security control, they face obstacles if they try to build new venues and risk the military turning an area into a "closed military zone" if they try to arrange a festival.

According to Ibrahim, who has toured the West Bank with a mobile theater showing puppet shows for children, he sees villages in Area C being widely neglected.

“No one goes there. Sometimes I reach a place and there is no electricity and I have had to connect to my car battery,” he said. He sees it as the government’s responsibility to ensure that cultural events also reach these areas.

According to Julien Chiappone-Lucchesi, director of the French Institute in Ramallah, around 80% of major cultural activities happen in Ramallah. He sees the city’s many cafes, coffee shops and political and international institutions fostering an atmosphere of freedom to address even sensitive social and political topics. In his view, this has also lead to an increase in quality with some events, such as the annual Ramallah Contemporary Dance Festival, now offering a better program than its counterpart in Tel Aviv. Chiappone-Lucchesi added that while they are more careful when choosing events in the institutes’ Gaza branch, he never censors events in Ramallah. But the flipside of the vast number of cultural opportunities is competition for an audience.

“In a day, you can have up to three or four events and since it’s often a small circle of the bourgeois who attend, they can’t be at the same place,” he told Al-Monitor.

The American-funded "Holiday" has had no problems attracting audiences. On its opening night May 30, a wide international audience crossed the checkpoints from Jerusalem to see the play, which featured English subtitles on a screen above the stage. But the play also tours other cities and arranges for busses to bring people from rural areas.

“For some, it’s the first time they see a play, and you hear them complain that there is alcohol and girls in the play, or it not being about the occupation,” Firas Abu Sabah, one of the actors, told Al-Monitor with a smile.

Lena Odgaard is a Danish journalist reporting from around the Middle East, primarily on Israel and Palestine. On Twitter:  @l_odgaard