How art is bringing Gaza, West Bank together

For the first time, the Palestine International Festival for Dance and Music was held in both Gaza and the West Bank. 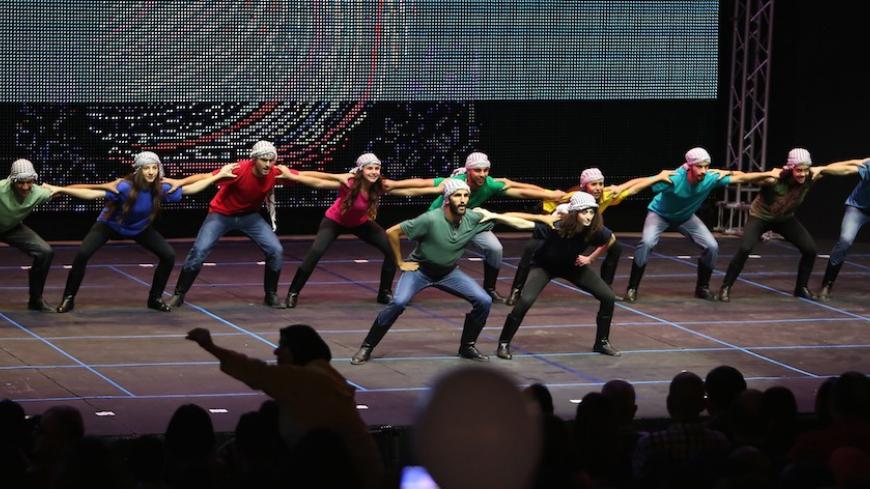 Art students perform during the Palestinian Dance and Song Festival against Discrimination late on Aug. 4, 2015, in the West Bank city of Ramallah. - ABBAS MOMANI/AFP/Getty Images

GAZA CITY, Gaza Strip — Gazans are always open to opportunities that might bring them joy, including passionately welcoming the chance to participate in artistic events. The political situation has limited the arts, but that appears to be slowly changing, as evidenced by the recent Palestine International Festival for Dance and Music.

The festival opened in Gaza City on July 27, and in a first, did so in parallel with the festival opening in the West Bank, a landmark in sharing Palestinian art. This was the first year that Gazans took part in the festival and that Gaza hosted festivities, which was founded in 1993 by the Popular Art Centre.

On opening night, Iman Hamouri, the director of the Popular Art Center, delivered a speech at the Palestine International Theater in Ramallah that was broadcast live in Gaza City, in Rashad al-Shawwa Hall. After Hamouri's speech, some bands performed, including the Dawaween Band. Their participation in the festival came about after members of the Popular Art Center visited Gaza and discussed the possibility with the bands and the Ministry of Culture in Gaza. Event organizers told Al-Monitor that over two evenings, July 27-28, the festival attracted some 3,000 people in Gaza. The festival closed in Hebron on Aug. 8.

Dima al-Shalti, 22, among the audience in Gaza, told Al-Monitor, “I was happy to attend, and I hope that the Gaza Strip will participate again in the festival in the coming years.” She said that she had not expected so many people to attend. It was a full house, and she wasn't able to enjoy the show as much as she would have liked because of that. She reiterated her passion for the art at the festival. Shalti attended the second evening of performances, during which al-Anqaa Band and the band from the National Center Sun Dignity for Arts and Culture performed.

“The festival management chose for this year the theme Freedom of Movement, to challenge Israel and the obstacles it puts in the face of Palestinians in all aspects of life, including art,” Adel Abdel Rahman, festival organizer in Gaza and founder of the Dawaween Band, told Al-Monitor. “We agreed to hold two evenings in the Gaza Strip. The Gazan Dawaween Band was to perform in al-Hakawati Theater in Jerusalem Aug. 6, but Israel refused to grant permits to the band members for unknown security pretexts.”

Instead, in an unprecedented event, members of the Dawaween Band performed Aug. 6 at the Beit Hanoun/Erez checkpoint, on the Gaza-Israel border. Empty chairs, on which was written “Jerusalem Audience,” were set up in front of the stage, and the band sang and played music, including Palestinian national songs, for almost an hour.

Abdel Rahman said that authorities in the Gaza Strip, including the Ministry of Culture and the police, had facilitated holding the event. He also said more events will be organized at the checkpoint so that the world can see the siege is not, as Israel claims, due to Gaza’s exportation of terrorism.

Sharaf Dar Zeid, another festival organizer in Ramallah, said that this year's freedom of movement theme appeared in ads, hung in theaters and was reiterated throughout the festival. It could also be seen on buses going from city to city in the West Bank to transport people attending festival events.

The Dawaween Band, which includes 40 members, was formed in December, adding a new musical touch to Palestinian artistic heritage. Abdel Rahman said that bands in Gaza suffer from a lack of instruments, and when available, from their high price. In addition, the electricity crisis impedes bands from properly practicing. There is also the issue of tight financial resources. Ticket prices for most shows do not exceed $4.

Dar Zeid said the Palestine International Festival has always aimed to break the cultural and artistic isolation imposed on Palestinians. The festival showcases Arab and foreign bands and encourages local bands to increase their artistic output by participating in the festival each year. Dar Zeid said that bands are selected based on their new work.

He noted that the Popular Art Centre had previously not included Gaza in the festival because organizers believed that Gazans were not interested in the arts. “Cultural differences are not limited to the Gaza Strip,” he said. “There are other areas in the West Bank that do not accept such arts, but we are trying to change this perspective and raise artistic awareness.”

Ramy Massaad, the official in charge of the Festival Venue Committee in Ramallah, told Al-Monitor, “The obstacles facing the festival included the Israeli blockade and Israel’s refusal to grant some bands permits. This year, the Dawaween Band from Gaza and Eskenderella from Egypt were banned [from going and performing in the West Bank]. In addition, social obstacles sometimes prevent artistic performances in some regions, as [some Palestinians] disapprove of Western dance groups.”

Massaad said that there were 15 festival evenings this year in five West Bank provinces, with the focus on artistic caliber rather than consumerist art. Ticket prices were in line with the economic situation. In Gaza, Hebron and Jerusalem, tickets were free, but in Ramallah, they sold for $8 and in Jenin for $3.

Sami Abu Watfa, the director general of civil work at the Ministry of Culture in Gaza, told Al-Monitor that his ministry does not object to holding events that respect the traditions and norms of Palestinian society. He indicated that the artistic and cultural situation in Gaza is experiencing diversification and recovery. He blamed the political situation in Gaza for the absence of the festival in previous years. The ministry does not have information on the number of art bands in the Gaza Strip.