Palestinian artists have formed a new union in Gaza in response to declining support and funding of the arts amid continued infighting between Hamas and Fatah, reports Rami Almeghari. 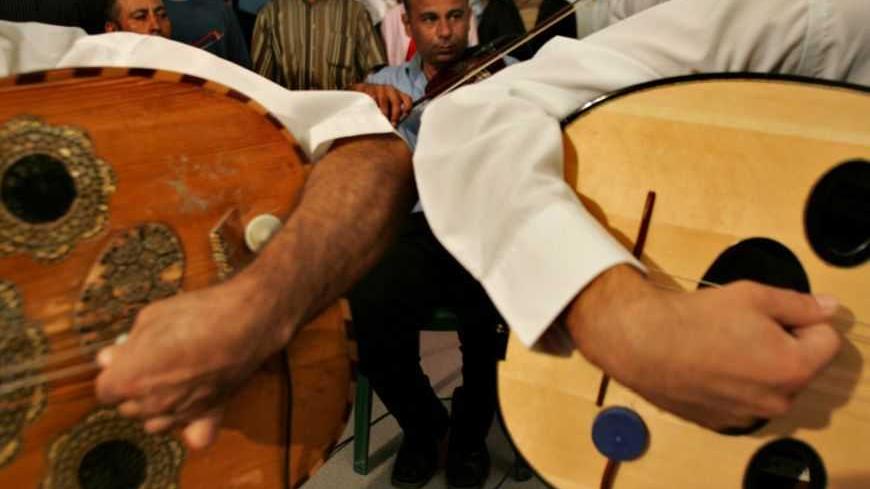 Roughly 600 Gazan artists held a conference in Gaza City on Feb. 28 to form a new Palestinian artists’ union in a bid to preserve their work. The gathering of the General Union of Palestinian Artists is the first of its kind to be held in Gaza in two decades.

The conference sought to address Gaza's neglected music and art scene, which has been hampered by war and Palestinian political division. Speaking to Al-Monitor, Yusri Almeghari, a member of the conference steering committee, said that the gathering concluded with a series of recommendations, including electing a 78-member board, which would involve all the political parties in the Palestine Liberation Organization (PLO).

"I can tell you that many of those who attended had tears [in their eyes] because it was the first time we held such a gathering, which, we hope, will constitute the beginning of organized artistic activities across the territory,” Almeghari said.

Wars with Israel and political infighting between Hamas and Fatah have resulted in a lack of interest in Gaza’s art scene as well as funding for it. As a consequence, musicians in the Gaza Strip face significant challenges, including a dearth of professional training and fellow professional musicians.

In 1986, Mohammad Abu al-Seoud, a 50-year-old local musician in the central Gaza Strip town of Deir Elbalah, began composing and writing melodies for patriotic songs, but the veteran composer stopped working in 2004, citing a lack of support from authorities.

"I have spent all my life in music, and I have performed many melodies, even on Palestine TV prior to the 2007 political split in Gaza. Yet, I have increasingly felt disappointed as the musical scene in Gaza has become worse than ever, mainly because of the lack of music schools and professional training," Seoud told Al-Monitor at his modest family home.

One band that took part in the conference was the National Band for Folkloric Palestinian Arts, which is one of the few leading national bands in the occupied Gaza Strip that primarily performs patriotic songs.

"Our band was established in 1996, and since then it has taken part in a series of performances locally and regionally, including festivals in Haifa, which was a Palestinian city prior to 1948, as well as in Egypt, Morocco and Tunisia,” said Walid Ataiya, the band's deputy director. The band consists of 35 members, including 7 women between the ages of 18 and 25, who perform the folkloric Levantine dabka dance.

In addition to producing new content, the band also revives famous Palestinian nationalist poetry, such as the late Mahmoud Darwish’s “We Can Never Forget Our Ancestors, We Can Never Forget the Days of Dignity,” Ataiya explained. The band’s ability to perform in Gaza, however, has been routinely disrupted since 2006 due to the political climate.

According to Swailam Alabsi, a well-known scenarist and film director in Gaza, the composition of patriotic songs has suffered because of a lack of patronage by the relevant authorities, as well as the absence of music schools, as reported by Asmaa al-Ghoul.

Patriotic music, once a hallmark of Palestine’s national resistance movement, has fractured along factional lines, according to Alabsi. "I personally have written hundreds of patriotic songs since 1967. The songs used to promote national trends, but since the Oslo peace accords, unfortunately, patriotic songs have begun to appear in different forms and colors, each representing a political faction,” he said.

Regardless, the national band continues to write patriotic songs that “only go with the national aspirations of the Palestinian people,” Alabsi explained.

“Even in the time of Oslo itself, I personally composed a song that was anti-Palestinian Authority corruption during the time of late President Yasser Arafat himself. Arafat told me, ‘Do not worry Swailam, the situation will get better,’” he said.

The internal split among Palestinian factions resulted in the national band being used as a political weapon of Hamas and Fatah. The band has faced restrictions in Gaza and an attempted takeover by the Palestinian Authority in the West Bank.

"We have been facing lots of restrictions from local authorities here. For instance, they will not allow us to broadcast a certain song on a local radio station, or they prevent a certain singer from performing a certain song. We want real patronage of patriotic clips or songs that reflect the national Palestinian scene independent of any political affiliation,” Alabsi said while calling for Hamas and Fatah to repair their differences.

Nahed al-Hour, director of the national band, revealed that PA President Mahmoud Abbas had issued a decree three years ago to place the band under the auspices of the Ramallah-based authority.

“So far, such a decree has not seen the light for reasons that we do not know,” he said, appealing to all parties concerned to support his band and respect its non-partisan stance.

The formation of the new union is in response to the neglect and politicization of Gaza’s art scene. Among the recommendations are, according to Almeghari, establishing acting and music schools in Gaza, having musicians and actors participate in festivals abroad to represent Palestinian art and folklore, and holding local shows at public theaters to generate much-needed income for the continued development of the arts in Gaza.

Almeghari emphasized that those elected at the conference will represent the Gaza union at an upcoming general summit for the Palestinian arts, to be held in either Ramallah or Gaza. The new union is part of a growing movement of grassroots Palestinians frustrated with the continued political division between Hamas and Fatah negatively affecting Palestinian life.

"We deeply hope that the current political split will come to an end once and for all and that we Palestinian artists will have our own home for all of us, irrespective of political affiliations,” Almeghari said.

Editor's note: Yusri Almeghari is a relative of the author.