Egyptian director Tariq El-Dweiri wrote the play “The Trial,” to show what the Egyptian street has come to after a revolution brought to power religious thought. 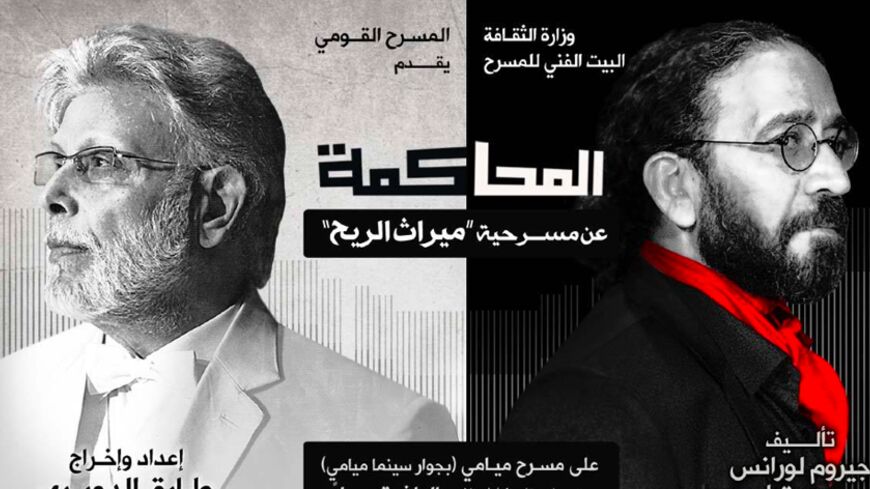 CAIRO — Watching the play "The Trial" is akin to a revolution — it shakes one's beliefs.

This is what director Tariq El-Dweiri intended when he meticulously prepared the production and screenplay adapted from "Inherit the Wind," the 1955 play by Jerome Lawrence and Robert E. Lee. The illusion of a divide between the play and the audience is shattered. The play begins with the national anthem and the audience stands up, before realizing that it's merely part of the play. They then gasp in astonishment.

This small revolution occurs inside the audience, making them wonder what the Egyptian public has come to following the recent revolutions. Dweiri intended to present his audience with an objective and "symbolic" representation of what happened in Egypt following a revolution that ended with the rule of religious thought, represented in reality by the Muslim Brotherhood. In the play, the "virtuous" man wears a white robe. Another revolution arrives via the army, represented by a delegate of the general prosecutor who wears military boots.

These symbols begin with the first scene of the play, which includes an expressive dance carried out by those who will later become the citizens of this poor city — whether the bookseller, the monkey owner, the man with a disability, the coveted woman or the lemon vendor.

However, the people of the city quickly fall down during their dance, disappearing as soon as a man resembling an angel, with long hair and white gloves, begins to speak. He symbolizes the "sacred," calling to mind the famous Karl Marx quote, "Religion is the opium of the people."

The text of "Inherit the Wind," which was twice adapted into a film, addresses the eternal humanitarian theme of the battle between reason and the sacred.

The idea behind "Inherit the Wind" was based on the true story of American John Scopes, a teacher who, in 1925, had his students read a chapter about the theory of evolution and natural selection put forth by English naturalist Charles Darwin. Teaching this had been banned in public schools under the Butler Act, so he was tried on charges of heresy. His town became the stage for a famous trial that lasted 10 days, known as the Scopes Monkey Trial.

Adapting this play to an Arabized text to be presented in Cairo is an adventurous undertaking by any standards. The director was intent on making a profound argument through a long dialogue in which the audience does not get bored.

Dweiri was clever in his presentation, using a varied theatrical form that mixed classical and experimental styles. The play includes footage displayed on a large screen at the back of the stage, yet this does not disturb the flexibility and motion of the production, and nothing remains static in the play.

The stage moves in a circular manner that gives everyone their share of light and dialogue by the defense lawyer, the prosecutor, the witnesses and the townspeople. Some of the latter are jurors, while others sit in the courtroom audience. Herein lies the second shattering of illusion, since they sit among the actual audience.

The viewers' expectations are not disappointed, except by the teacher who perpetrates the first "rational" act, which the townspeople consider a sin. He does not take on the true role of defending himself. Rather, he remains like the revolutionaries, who begin their revolutionary action in the streets only for their revolutions to be seized by ideologues. The role of the teacher's defense is assumed by Mr. Drummond, whom the townpeople calls "the devil's advocate." The role is played by the director himself, after the actor who had previously played the role, Ahmed Fouad Salim, backed out.

"The Trial" — a play put on 56 times this year, with Al-Monitor attending its final performance at the Miami Theatre in Cairo on Nov. 9 — was not aimed at discussing politics, but rather religion. The director was careful not to debate creation and evolution, something the original play was based on. However, this debate was present in the play through the monkey, who accompanied his owner to take photographs with the audience — the third shattered illusion in the performance.

The audience was interactive and applauded at length when Drummond, the lawyer, said: "There is sanctity in a child's ability to learn multiplication tables, more than in all of your shouts of 'Amen … Amen.' A single idea can be more immortal than your sanctuaries. And the history of human knowledge is a greater miracle than your superficial interpretations."

At the end of the play, the teacher is found guilty and fined, but not imprisoned. Mr. Fadil, who brought the case against the teacher, dies. Drummond is saddened by his death, telling a journalist in the play: "I cannot imagine the world without him." The journalist sarcastically replies: "It's 'sympathizing with fanatics' week."

This symbolic scene was a source of theatrical criticism in Egypt. Some considered it to show sympathy toward former President Mohammed Morsi and what happened at the Rabia al-Adawiya sit-in, which was violently broken up by Egyptian security forces.

"The Trial" won five awards at the seventh edition of the Egyptian National Theatre Festival this year, most notably best play and best director. Ashraf Abdel-Ghaffour won best actor for his role as Mr. Fadil, and the play also picked up the awards for best stage scenery and best music.

Al-Monitor spoke with Dweiri in Cairo about the scene that provoked criticism. "We are suffering from secular and religious fanaticism. Both sides have lost their humanity. Thus, I wanted to say that the killing that happened at the Rabia sit-in was not humane, even though I think that the Brotherhood was among the reasons for it."

Dweiri stressed that while June 30, 2013, represented the end of a political party, it was not the end of reactionary thinking. He noted that the battle is not with the Muslim Brotherhood, but rather against obscurantist ideology that still exists. "The evidence of this is the presence of Salafists on the current political scene, exactly as the former regime of Hosni Mubarak used to use these Salafists," he said.

He clarified that the capitalist figure, represented by the governor in the play, in the end controlled the politician, the religious man and the soldier. Everyone listened to his plans.

Dweiri wrote the first draft of the play in 2002, when he saw the growth of the religious trend on the Egyptian street. However, he faced numerous difficulties in terms of censorship and funding before the state theater allowed it to see the light of day.

He said that terrorism cannot in any way be fought with the security solution, but rather through culture and art. "The freedom of these arts is not better than it was in the past," he said.

Dweiri added, "The last scene included the representative of the military prosecution, which symbolizes the current political scene. I see what is happening in Egypt as a coup. However, it is not a coup against the Morsi regime, but rather one against the January 25 Revolution, during which we spent 18 days on the streets dreaming that everything would change."