The new Saudi laws targeting Islamist groups in the kingdom are part of a push to ensure local sympathizers with the Muslim Brotherhood don't challenge the royal family's regional policies. 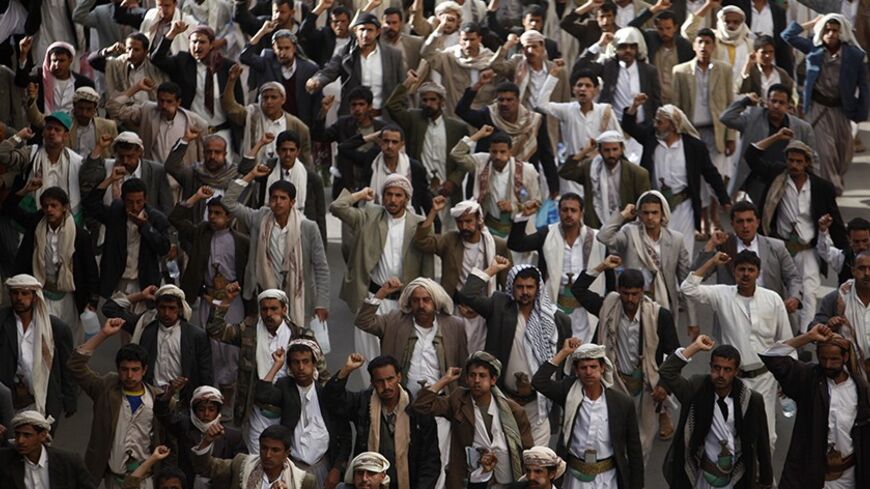 Supporters of the Shiite Houthi rebel group shout slogans during a demonstration in Sanaa against the deportation of Yemeni laborers from Saudi Arabia, April 5, 2013. - REUTERS/Khaled Abdullah

The Saudi royal decree against terrorism in February 2014, and later the Interior Ministry declaration in March banning several Islamist groups, can be considered as the general framework of the new security doctrine that will govern the behavior of the Saudi government in the coming period. This takes into account that potential court cases against those targeted by the two declarations will remain closer to the interests of political decision-makers, which may vary from case to case and time to time.

Solid threats are represented by armed groups with a history of targeting Saudi security organizations, such as al-Qaeda, Hezbollah in the Hijaz and the Houthis. Despite the success of the Saudi government in weakening these groups, that the Syrian revolution has not been decidedly resolved and has turned into a sectarian conflict, in addition to the troubled situations in Yemen and Iraq, may present an opportunity for the revival of these groups. Saudi border areas with Yemen and some areas in the east and north of the kingdom are potential locations for such solid threats.

Soft threats are represented by rights activism and general demands, in addition to groups accused of infringing on religious truths or groups affiliated with Muslim Brotherhood thought. These threats may represent a challenge to the prevailing discourse, whether politically or religiously.

Writings that contradict religious texts and sacred symbols have been controversial within Saudi society for years and have culminated in the incidents involving Hamza Kashgari and the tweets of Turki al-Hamdalati. They were arrested for tweets considered offensive to religion and released later.

A second soft threat, according to the new security doctrine, are human rights activists, organized pro-reform activists and those who take part in writing reformist statements or who interact with international human rights organizations. Most of these activists have either been sentenced to prison or are in the process of being tried.

The third group is the Muslim Brotherhood. The security declarations did not specify a geographic location for that group, which means that all those who belong to this group or are sympathetic with its ideology are deemed terrorists, whether inside or outside the kingdom.

This opens a new front for confrontation, which the Saudi government seems determined to fight as part of the conflict raging for control of the Sunni political scene after the region slipped into sharp sectarian polarization. Furthermore, this makes a conflict between and among the diverse Sunni projects in the region almost inevitable, contrary to the Shiite political scene, which is dominated by Iran and has no potential competitor in the foreseeable future.

The pro-Muslim Brotherhood current in Saudi Arabia can be divided into two parts: The first part is the Salafist group committed to Wahhabist ideology in everything except in absolute loyalty to the state. This group keeps a distance between itself and the government and sometimes criticizes the latter, and seeks to restore the relationship between rulers and religious sheikhs.

This group is also the loudest, most popular and the most active in the media regarding the Syrian revolution, and it was sympathetic to the rule of the Muslim Brotherhood in Egypt and considered it the beginning of Islamic rule. The positions of this group are best explained by the statement of Sheikh Nasser al-Omar and another statement issued by a number of Salafist sheikhs regarding the events in Egypt.

During the past decade, this group formed a “buffer zone” between al-Qaeda and violent groups on the one hand and the conservative majority in Saudi society on the other. The verbal conflict between the two has intensified over the last decade, and this conflict still exists and has cast a shadow over the conflicts between Salafist factions in Syria.

Yet with the cracks in al-Qaeda in Syria and the rise of Jabhat al-Nusra and its disputes with the Islamic State of Iraq and al-Sham, we are seeing the borders of this ‘buffer zone’ being reconstituted and tested for their ability to survive and endure, expand and contract.

The second part is a group very close to Brotherhood ideology and influenced by Salafist ideology, albeit to a lesser degree than the first category.

The second category played the role of a bridge between traditional Salafists coming from the center of the kingdom and Hijazi society, which used to have non-Salafist sectarian ideologies. A pioneer in this category who played a central role in that bridge was Mohammed Nassif, the Hijazi figure known for his distinguished relationship with both Muslim Brotherhood founder Hassan al-Banna and King Abdullah bin Abdulaziz. This group continues to play this intermediary role even today and it has contributed to reducing the social and religious influence of the Hijazi traditional elite, which was leery of the Salafist call. This bridge group was able to form an alternative elite that was closer to the Salafist doctrine, and this was manifested in first municipal elections in 2005, when this new elite made gains.

This second category was also a bridge with the rest of the Muslim communities outside the Arabian Peninsula. And that role speaks about their prominent and founding presence in the Islamic institutions with global dimensions, such as the World Islamic League and the Islamic Development Bank.

Drying up the religious presence of this group can be an opportunity for the rise of religious currents that are not in agreement with Salafist doctrine.

The government wants Saudi Islamists sympathetic with the Muslim Brotherhood to back down on their foreign positions and comply with its policy, or at the very least not to oppose it. This is especially true regarding their position on the Muslim Brotherhood in Egypt. Furthermore, the government wants to restrict them to the field of social work in the kingdom, and for them not to demonstrate any political ambition, even if it were an ambition for reform, for they are a potential threat that should be kept under constant pressure.