After success with Trump, Bibi has trouble swaying EU on Iran

Despite his success swaying the US president, Europeans know that Israeli Prime Minister Benjamin Netanyahu is skewing the truth about the West Bank occupation just as he falsely accused the Iranians of violating the nuclear agreement. 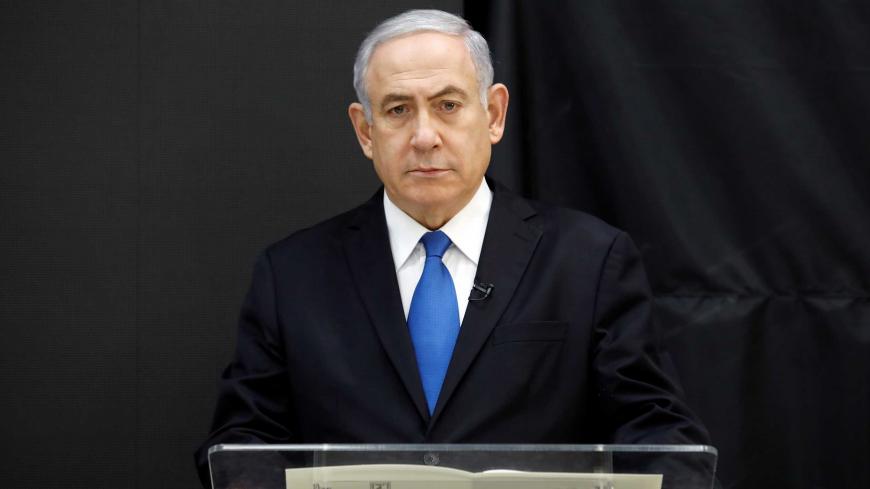 Prime Minister Benjamin Netanyahu was determined that the world would know Iran had violated its 2015 nuclear agreement with world powers, but he was stingy with the truth. In his recent news conference, Netanyahu addressed Iranian positions from before the agreement was signed and did not supply proof that Tehran had not fulfilled the terms of the deal. Nonetheless, if US President Donald Trump is to be believed, the warmed-over leftovers Netanyahu fed him removed any doubts he might have had about the need to pull out of the deal. And most Israelis are cheering their leader.

Netanyahu is determined for the people of the world to know that Jerusalem is Israel’s eternal capital, and most importantly for the Israeli people to know which Israeli leader made the world’s biggest superpower move its embassy there in recognition of that fact. That effort, too, has gone well for him. On May 14, Netanyahu will celebrate the inauguration of the US Embassy in Jerusalem. Most Israelis will join him. According to the Peace Index compiled by the Evens Program in Mediation and Conflict Resolution at Tel Aviv University and the Israel Democracy Institute, 68% of Jewish Israelis regard the move of the American Embassy from Tel Aviv to Jerusalem as a positive step for Israel’s interests, although the Palestinians view it as a severe blow.

Netanyahu is determined to eliminate the term “occupied territories.” Here, too, he can take credit for a major victory: Last month's annual State Department report on human rights around the world replaced “occupied territories” with “Israel, the Golan Heights, West Bank and Gaza.” If there’s no occupation, Israel can do whatever it wants in these territories, including theft of Palestinian lands, abuse of its residents and even deportation. If there is no occupation, Palestinians can be uprooted to make way for Jewish settlements, the 1993 Oslo Accord can be erased from the history books and such trivialities as international law can be ignored. After all, when Trump announced the US withdrawal from the Iranian agreement, he was showing the world that international pacts signed by his country are at best a recommendation.

The Peace Index indicates that Netanyahu need not concern himself with public pressure on the Palestinian issue, as 67% of the Jewish Israelis surveyed do not feel that Israel should relax its curbs on the Gaza Strip given the dire economic situation of its 2 million Palestinian residents. A sweeping majority of those polled, 83%, support Israel’s policy of using live fire to disperse Palestinian protesters along the Gaza border fence. Most Israelis don’t want to know what their government is doing in their name in the Jordan Valley, which makes up a third of the West Bank territory. They slept peacefully in the pre-dawn hours of May 8 while Israeli forces raided the village of Khirbet Humsa in the northern Jordan Valley and evicted five Palestinian families from their tent homes. This was the third such eviction within two weeks in order to carry out military drills in the area, and among the 29 residents were 19 minors, including a baby and a child with Down syndrome.

The B’Tselem human rights organization claims the endless military exercises in the northern Jordan Valley reflect a decadeslong policy of making life miserable for members of the Palestinian communities to drive them out. The Israeli authorities destroy infrastructure facilities funded by European states such as wells and solar panels, confiscate water tanks and cut water pipes. At the same time, in conjunction with the Israel National Fund, the military’s Civil Administration is planning a surge of Jewish settlement in the Jordan Valley. Last December, the Ministry of Housing announced that 10,000 new inhabitants would move into the region, doubling its population. The plan, which has been allocated 35 million shekels ($9.75 million) in taxpayer money, would put an end to the two-state solution. Netanyahu does not want the world to know it.

Israelis are obviously not at liberty to dwell on Palestinian suffering when they are repeatedly told that Iran plans to throw a nuclear bomb at them. When Iranian shelling from Syria sends residents of the Golan Heights into shelters, who cares if the Israeli army orders hundreds of Palestinians in the Jordan Valley to vacate their lands and make way for Jewish settlers? The Breaking the Silence organization? Rest easy, radical right-wing hotheads are breaking their bones. The New Israel Fund? Netanyahu’s buddies — the extreme-right Im Tirzu organization — are taking care of them. How about non-Israeli proponents of human rights? Interior Minister Aryeh Deri detains and deports them. In the latest such move, Deri ordered the expulsion of a Human Rights Watch representative over his alleged support for the Boycott, Divest and Sanction (BDS) movement.

Another recent deportation target was Columbia University law professor Katherine Franke, faculty director of the Public Rights/Private Conscience Project. Israeli authorities detained Franke upon her April 29 arrival at Ben-Gurion Airport and deported her. In a written interview with Al-Monitor, Franke rejected Israeli claims that she was active in anti-Israel BDS efforts. Her visit, she explained, was designed to prepare a fact-finding mission by American human rights groups and to examine possible cooperation between several Palestinian law schools in the West Bank and Columbia University on a joint human rights master’s program. “A government cannot claim to be democratic in nature when it punishes its critics, whether by denying them entry to work collaboratively with Israeli and Palestinian NGOs and academics, when it revokes the residency status of Palestinians who are insufficiently ‘loyal’ to Israel as a ‘Jewish state’ or when it deports human rights advocates,” Franke wrote.

It appears that when a person like Trump, who is willing to separate children from their immigrant parents, leads Franke’s country, Israel can also deport children from their land and at the same time portray itself as the only democracy in the Middle East. Indeed, Netanyahu is capable of selling Trump anything. And so, when the president elected by Franke’s people is willing to buy a used Iranian archive from Netanyahu, millions of people can be kept under occupation but the term “occupation” must be relegated to the State Department’s archives.

The question is how Europe’s leaders will deal with Trump’s Israeli friend. Netanyahu cannot sell them a bill of goods about Iranian violations of its nuclear agreement. They are still allowed to help human rights organizations operating in the occupied territories and to get reports from them about everything that Netanyahu doesn’t want the world to know.