Turkish President Recep Tayyip Erdogan calls for inter-Palestinian reconciliation as part of his attempts to portray himself as the savior of Gaza. 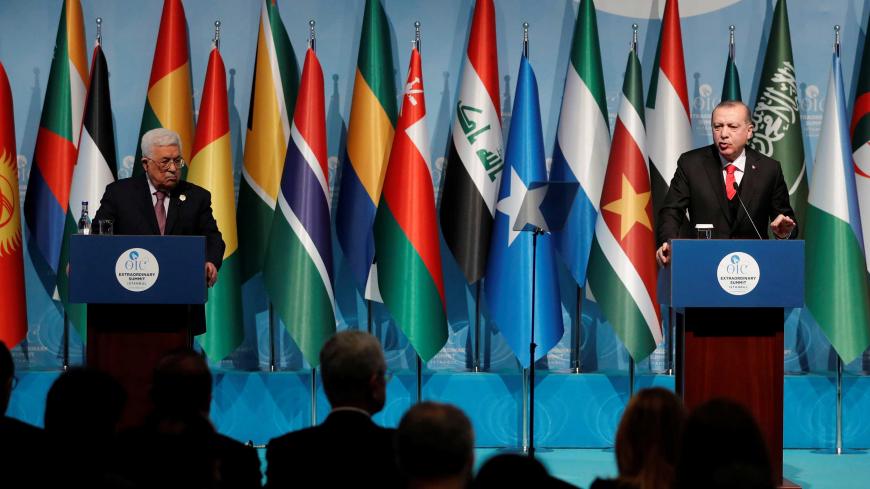 Palestinian President Mahmoud Abbas was hospitalized in the West Bank city of Ramallah and was unable to attend the May 18 Organization of Islamic Cooperation summit in Istanbul. The host, Turkish President Recep Tayyip Erdogan, was thus obliged to tell Palestinian Prime Minister Rami Hamdallah what he had planned to tell Abbas: that the Palestinian Authority (PA) must take an active part in saving the Gaza Strip.

Erdogan is considered a patron of Hamas. He has in the past hosted a Hamas branch office established in Istanbul by the deputy head of its political bureau, Saleh al-Arouri. The office was shut down in keeping with Israel’s demands as part of an Israeli-Turkish reconciliation deal signed in June 2016. Arouri moved his activities to Beirut, but a source in the PA told Al-Monitor that he often travels to Istanbul, stopping off there on the way to various destinations, especially to Tehran.

Ismail Haniyeh, the head of Hamas’ political bureau, delivered a sermon May 18 in a Gaza mosque that attests to the importance his group attaches to reconciliation with the PA. “This is the most appropriate time for reconciliation among all the Palestinian factions, and we are ready to take serious steps,” he said. Haniyeh did not say whether these steps include a willingness to disarm, in accordance with the demand by Fatah, the main component of the PA, as a prerequisite for reconciliation.

Shortly after he spoke, representatives of more than 40 Muslim states met for the extraordinary session of the Organization of Islamic Cooperation convened by Turkey. It was organized hurriedly, ostensibly to convey Muslim unity from Istanbul in the face of the May 14 US Embassy move to Jerusalem. In fact, the conference was intended to position Erdogan as the leader of the Muslim world at the expense of Egyptian President Abdel Fattah al-Sisi.

This is not the first time Erdogan has directed harsh rhetoric against Israel over its 11-year blockade of the Gaza Strip and expressed unconditional support for Hamas. He did so during all of Israel’s clashes with Hamas over the past decade. He stormed out of a speech by late Israeli President Shimon Peres in 2009 in Davos, Switzerland, and he adopted harsh language the following year over the 2010 Mavi Marmara flotilla that set off from Turkey to breach the Gaza blockade. He unleashed a broadside after the summer 2014 Israel-Gaza war known as Operation Protective Edge and, despite the reconciliation agreement between the two countries, attacked Israel heatedly over the recent Gaza border clashes. Erdogan has repeatedly sought to portray himself as the savior of the besieged Gaza enclave, and Haniyeh often refers to him as beloved, dear brother.

Egypt treats Hamas with suspicion and undertakes goodwill gestures toward the organization only as a reward for good behavior, most recently opening the Rafah border crossing from Gaza in return for its agreement to stop the violent demonstrations along the Israel border. Erdogan adopts a different approach, supporting Hamas almost unconditionally. He seeks to unite the Muslim states around him to save the people of Gaza and stabilize Hamas control of the Strip. However, like Sisi, Erdogan understands that Gaza’s problems cannot be resolved absent a reconciliation with Fatah.

A PA official told Al-Monitor that the Turks have in the past tried to engage in mediation between the two main Palestinian factions behind Egypt’s back, but Abbas rejected these efforts. In Istanbul on May 18, Hamdallah was rebuked for Abbas’ refusal to promote reconciliation, which, according to the Turks, would benefit the Palestinian people and the brothers besieged in Gaza. Abbas views Erdogan as biased in Hamas’ favor, especially given Turkey’s ongoing ties with Arouri, and is unwilling to cooperate with Turkey’s moves, for now.

Why does Erdogan believe he can bring Abbas around after Egypt failed? How can he portray himself to Abbas as an honest broker given that throughout the crisis between the two groups that started over a decade ago he always expressed unreserved support for Hamas? And how will he be able to persuade Abbas to set aside his demand for Hamas to disarm and to hand over control of Gaza to the PA?

The events of recent weeks have handed Erdogan two arguments that he believes will convince top PA figures to trust his leadership and accept the path he is proposing as an alternative to Egypt’s. The first argument is that while Cairo barely spoke out against the relocation of the US Embassy from Tel Aviv to Jerusalem, Erdogan led an inter-Arab campaign on the issue and did not hesitate to confront President Donald Trump over his decision. Erdogan promises Abbas to unite all the Muslim states in the world around the PA’s right to Jerusalem as the capital of a future Palestinian state. At the Istanbul summit, Erdogan called on participants to support the Palestinians and to continue to oppose the US Embassy move, even after its formal May 14 inauguration.

The second argument conveyed to Hamdallah in Istanbul is that Hamas’ resistance policy proved itself at the recent Gaza-Israel border fence incidents as the only weapon protecting Palestinians from Israeli aggression.

Turkey is proposing that Hamas and Fatah move forward with their reconciliation and set aside the weapons issue for future discussion once trust between them is restored, at which point the armed wings of the various Palestinian organizations will come together to form a united Palestinian people’s army.

The rivalry between Turkey and Egypt is no secret. It re-emerged in recent days when Cairo rejected Ankara’s request to approve the landing of a plane to evacuate wounded Palestinians from Gaza to Turkish hospitals.

Haniyeh can continue praising Turkey for its firm stand alongside Hamas and referring to it as sister-nation of the Palestinian, but he, too, knows that as long as Egypt controls Gaza’s lifeline — the Rafah crossing — any arrangement and agreement requires Cairo’s imprimatur. This is doubly true when it comes to a Palestinian reconciliation move that could strengthen Sisi’s rival, Erdogan.