Hamas chief Ismail Haniyeh called Jordanian King Abdullah II to try to engage him in efforts to achieve Palestinian unity while his deputy appears to have secured the support of Iran for the movement. 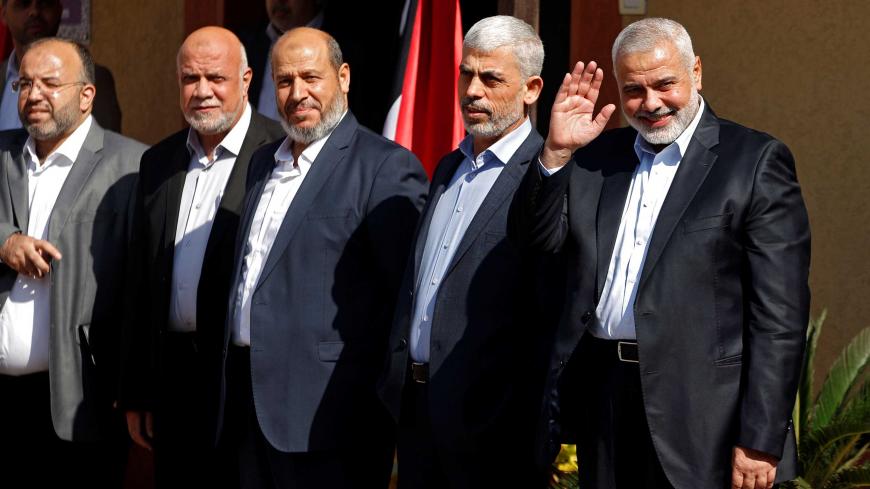 Ismail Haniyeh, the head of Hamas' political bureau, called King Abdullah II of Jordan on Oct. 25. There has been a nearly complete break between Hamas and Amman since November 1999 when Abdullah expelled the political bureau, then headed by Khaled Meshaal, charging that the movement's members had plotted against the kingdom. The only reprieve, a brief one, occurred five years ago, when Abdullah allowed Meshaal to enter the country during a visit by his patron, Qatari Crown Prince Tamim bin Hamad Al Thani. It was thought that the king did so in an effort to pacify the Muslim Brotherhood in Jordan. Since then, there has been no contact between the two sides.

It was reported on Oct. 24 that Abdullah had rejected a recent request by Meshaal to establish an office in Amman “for building an organizational infrastructure anticipating Hamas’ joining Fatah institutions.” Then came Haniyeh's call from Gaza.

Haniyeh knows that the king has influence with Palestinian President Mahmoud Abbas, so he tried to convince him that Hamas does not have a hidden agenda in advancing reconciliation. Haniyeh’s office even made public that he had told Abdullah that any talk of a diplomatic solution involving Jordan as an alternative homeland for the Palestinians amounts to a conspiracy to sow discord between the Palestinians and Amman. Haniyeh added that his movement regards the security of the Hashemite kingdom with utmost importance.

It is unclear what caused Haniyeh to bring up this last issue with the king, since it is totally unrelated to the reconciliation effort. It may be that he was trying to allay any suspicions that Abdullah might have that Hamas is plotting against him. As in the 1990s, Abdullah is today worried (as is Abbas) about Hamas striving to build an organizational structure that will enable it to strengthen its presence in the West Bank and to move to succeed Abbas as president.

Abdullah agreeing at this time to take a call from the head of Hamas' political bureau is considered a diplomatic achievement for Haniyeh. The Hamas leader wants to get Abdullah on board with the reconciliation process despite the king’s doubts about the agreement with Fatah, signed Oct. 12, which leaves Hamas’ military wing, the Izz ad-Din al-Qassam Brigades, intact.

Since the start of Egyptian efforts to end the rift between Gaza and Ramallah, the behavior of Hamas leaders has been confusing and inconsistent. There is no doubt that senior members of the political bureau, and even the heads of the military wing, are interested in reconciling with Fatah, because that is the only way Hamas can survive and maintain some power in Gaza. As they see it, it is better to compromise, by relinquishing some of its control over Gaza to Abbas and the Palestinian Authority, than to lose it all. They are not prepared, however, to simultaneously lose their military advantage over Fatah.

Hamas' military force, which the movement touts as the “weapon of the resistance,” numbers more than 20,000 armed men. Without it, Hamas would not exist, or at least be able to distinguish itself ideologically from Fatah. The diplomatic efforts that led Haniyeh to call Abdullah after a nearly 10-year silence and tell him how important the kingdom’s security is to Hamas are intended to find a middle ground, where Hamas reconciles with Fatah and at the same time retains its military and its essence. This, however, is an impossible task.

Abbas has made it clear, and Abdullah undoubtedly supports his position, that he will not abide a “Hezbollah model” for the PA. That is the essence of the disagreement between Fatah and Hamas. It is surprising that Hamas has not yet grasped this.

Hamas leaders have also not come to terms with their ultimately having to make two strategic decisions if they want reconciliation to move forward. The first is an intra-Palestinian decision that concerns the need for one regime with one security apparatus for all the Palestinian territories. The second decision is no less dramatic: choosing the right side in the inter-Arab conflict between the pragmatic Sunni states — Egypt and Jordan —and their rival, Iran. There is no middle ground. There is no way to get along with everyone.

Days before Haniyeh sought to convince Abdullah of the seriousness of his position, deputy Hamas leader Saleh al-Arouri was visiting Tehran. Arouri was pleased to announce that the relationship between Hamas and Iran, which fell apart under Meshaal, has been restored. Arouri added that Hussein Sheikh al-Islam, an adviser to the Iranian foreign minister, had promised him that Tehran would supply Hamas with whatever it needs.

As of now, two weeks after the declaration of the intra-Palestinian understanding, Hamas is busy delaying the inevitable. The movement's leaders continue to play with the idea that they can have it both ways, but it is clear to everyone that they will soon have to make a dramatic decision: either true reconciliation — with all that that entails — or retaining its military force and ties to Iran. It is a life or death decision in a movement for which jihad against Israel is the basis of its existence. Letting go of its weapons would be a political and ideological defeat at the hands of Fatah from which there would be no going back. The second option, however — ending the Palestinian reconciliation process — does not look much better.

The power struggles among Hamas' divided leadership only add to the confusion and disarray in the organization, with each side trying to hold tight to its power. Haniyeh is striving to be a popular Arab leader who will succeed in breaking down walls of isolation, whereas the leaders of the military wing, foremost among them Arouri and the organization's Gaza chief, Yahya Sinwar, are moving toward Iran to avoid losing the ideological brand of violent resistance against Israel. At the moment, the ideological distance between Hamas and Fatah looks to be far greater than the geographical distance between Gaza and Ramallah, and bridging it appears to be impossible.