Top Iran officials wary of Europe after US deal withdrawal

Iranian officials expressed doubt about reaching an agreement with Europe to keep the JCPOA in place following the US withdrawal. 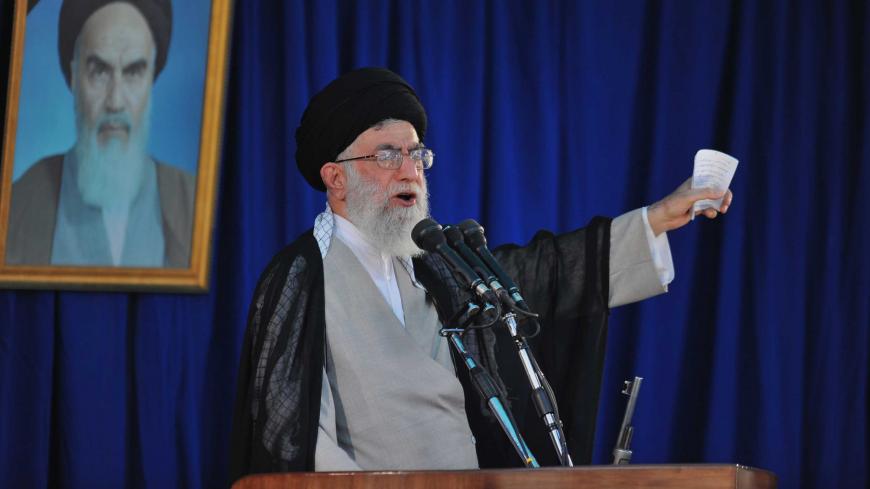 In a speech on the occasion of National Teachers’ Week, Ayatollah Khamenei reacted to US President Donald Trump’s announcement of a US withdrawal from the nuclear deal, saying, “The US president's shallow and ludicrous behavior wasn't unexpected. The same behavior existed in former US presidents. … There were probably over 10 lies in his speech. He threatened both the Iranian government and Iranian nation, claiming he would do one thing or another. On behalf of the Iranian nation I will say, 'Mr. Trump, you can’t do a damn thing.'”

Minutes after Trump’s speech, the Iranian president went on Iranian state television to say that Iran will decide whether to remain within the Joint Comprehensive Plan of Action (JCPOA) following talks with the European signatories (Britain, France and Germany) along with Russia and China.

Mentioning Rouhani’s determination to protect the deal, Khamenei stated, “I don't trust these three European Union countries either. If the government wants to make an agreement, they should ask for a guarantee, or else [Europe] will all do just as the United States did. If there is no definite guarantee, the JCPOA cannot continue.”

Khamenei also addressed the Iranian administration, saying, “Officials are facing a big test: Are they going to ensure that the nation's pride will be protected or not? The pride and interests of the nation must be truly secured."

Expressing his pessimism over the fate of the upcoming talks with European signatories, Khamenei noted, "If you can get guarantees, fine — although I doubt it. If not, we cannot stay in the JCPOA."

“The one-, two-week opportunity that the president [has given Europe to guarantee Iran’s interests] … it is completely clear that the Europeans are dependent on America, and between Iran and America, they will choose the United States. They can’t make decisions independently,” said Jafari at a conference May 9.

He emphasized, “We consider Trump’s decision for exiting the JCPOA as a good omen. This is not a new event, and it will not have a determining effect against our national interest in any area. It was completely clear that the Americans aren’t reliable and once again it was proved that America can't be trusted to negotiate and interact with.”

Chief of Staff of the Iranian Armed Forces Maj. Gen. Mohammad Bagheri's reaction to the news was that Tehran shouldn’t rely on the JCPOA. He said May 9, “We are now facing a political system that did not remain committed to its own signature on the JCPOA, which was not desirable for our nation. … Our experience in this country is that if we want to remain stable, we must stand on our own feet and shouldn’t rely on the JCPOA and such.”

Referring to Saudi Crown Prince Mohammed bin Salman’s anti-Iran approach, Bagheri noted, “During the past three months, this unwise young person who rules Saudi Arabia has joined America and is telling them, 'You attack Iran and we will give the money for it.' On the other hand, the Americans tell him, 'You attack Iran and we will support you.'” Bagheri added that the “enemies” of Iran have had the intention of attacking the country, but that they don’t “dare” to do so.

In the open parliamentary session May 9, moderate speaker Ali Larijani said that the upcoming negotiations with the three European countries are a test for the West. “Given the manner of Europe’s behavior in the past, we can’t be assured of their initial claims about [wanting to] keep the nuclear deal,” he said.

Larijani added, “It is worthwhile [waiting] for a few weeks for this test to [prove] to everyone that Iran tried all of the political and peaceful solutions. This is an opportunity for Europe to show whether it has the necessary weight to resolve international issues or not.”