How Iran and Europe can save the nuclear deal

To protect the nuclear deal from collapse, Iran and the E3+2 must define and implement a workable framework for protecting future trade and investments. 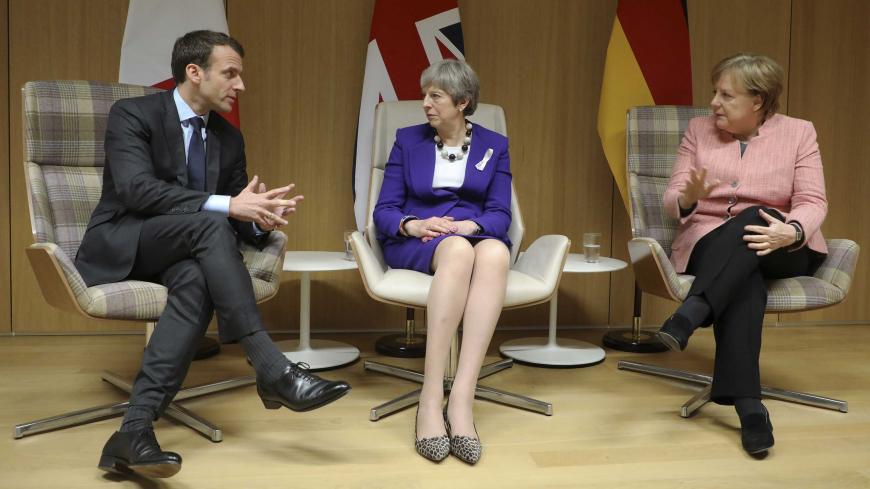 British Prime Minister Theresa May is flanked by French President Emmanuel Macron and German Chancellor Angela Merkel before their trilateral meeting at the European Union leaders’ summit in Brussels, Belgium, March 22, 2018. Britain, France and Germany are referred to as the E3 when it comes to the Iranian nuclear deal. - REUTERS/Ludovic Marin/Pool via Reuters

US President Donald Trump’s unilateral withdrawal from the Joint Comprehensive Plan of Action (JCPOA) has created an urgency for all other deal signatories to work toward saving the accord. As international companies face a new dynamic and risk profile, innovative steps will need to be taken to sustain the deal, especially in response to Iranian expectations.

After President Hassan Rouhani’s declaration May 8 that Iran will engage with European signatories to assess whether it is possible to continue implementing the deal without the United States, Supreme Leader Ayatollah Ali Khamenei on May 9 publicly summarized Iran’s priorities, “If you want to agree on anything, make sure there are practical guarantees in place. Otherwise, they will do what the US did to us. … Officials are facing a big test: Are they going to ensure that the nation's pride will be protected or not? The pride and interests of the nation must be truly secured."

In other words, the new JCPOA construct — based on agreements with the United Kingdom, France, Germany, Russia and China (defined as either the E3+2 or P4+1) — needs to consider Iran’s dignity and put in place guarantees that cannot be easily undone by political shifts in respective capitals. In an Al-Monitor article in March, a number of suggestions were made for measures that would address some Iranian concerns, especially if EU governments invest their own money into actual and future Iranian projects in strategic sectors. E3 stands for the three Western European nations; P4 for the UN Security Council members save for the United States.

The challenge faced by the EU is that it has to present guarantees to Iran while also protecting European businesses from US secondary sanctions. On this path, the EU will need a high level of cooperation with Tehran, particularly in the process of incentivizing European companies to continue their involvement in the Iranian market. Considering that large European enterprises have complex dependencies on the US market, banks and stock exchanges, it is safe to expect that the EU will mainly focus on small- and medium-sized enterprises (SMEs) to remain engaged in Iran. Some larger companies may seek licenses from the US Treasury, but the majority of companies that will continue business with Iran will either have little exposure to the US market or be prepared to accept European protections.

The Rouhani administration will look for an outcome to prove that its extensive diplomatic engagement with the West has not been a waste of time and resources. There will have to be clear gains for Iran in staying committed to the JCPOA, beyond the limited progress so far. Of particular symbolic value would be the delivery of Airbus planes, which are an integral part of the JCPOA. Given financing issues, only three out of 100 Airbus passenger jets have been delivered so far. While Airbus is European, it needs US licensing from the Office of Foreign Assets Control (OFAC) for sales to Iran since more than 10% of its components come from the United States. The Trump administration has revoked the Airbus license, giving Iran and European governments three months to find a solution.

Beyond symbolic expectations, Tehran will likely benchmark gains against the impact of the harshest sanctions years (2012-15). As such, it can be reasonably assumed that Iran will look for EU guarantees on the following topics:

The above initiatives may not cover all expectations in Iran. Presidential adviser Hamid Aboutalebi tweeted May 11 that “guarantees must include all of Iran’s political, economic and security related rights.” However, economic guarantees would go a long way to sustain the JCPOA.

If Iran and the E3+2 can define and implement a workable framework for protecting future investments, many companies, and especially European small- and medium-sized enterprises, would be in a better commercial position than before. It would surely be an irony if the US withdrawal actually benefited Iran on many levels. This in itself, namely the potential of isolating the United States in a multilateral accord, may become an incentive for Iran to make the new deal work.

However, if the parties fail to sustain the deal, there will be a new layer of distrust toward the West that will influence future Iranian decisions. However, in this era of geopolitical uncertainties, one thing is certain: In the absence of Western companies, the main beneficiaries of the situation will be Russia, whose companies are aggressively pursuing Iranian opportunities, and China, which has long overtaken Europe as Iran’s biggest trading partner.