Iranians reacted harshly to US President Donald Trump’s speech at the United Nations against Tehran and the JCPOA. 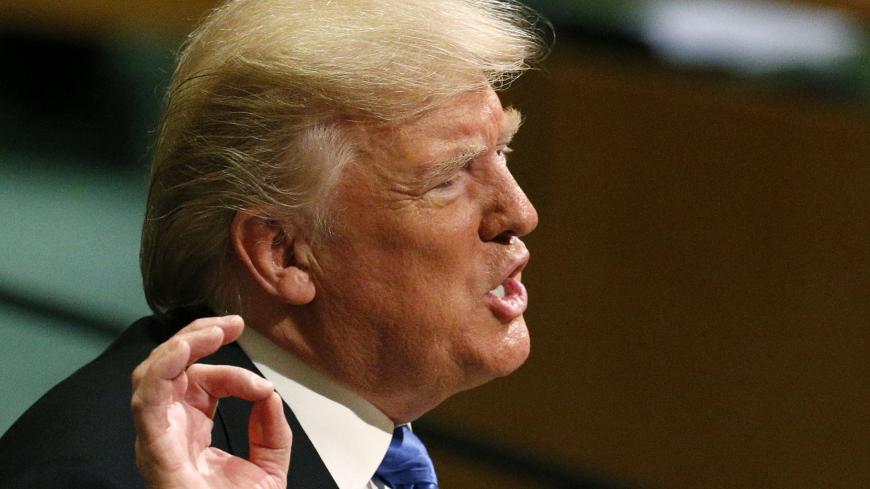 Around 6:30 p.m. Sept. 19, Iranians were tuned in, waiting to hear what US President Donald Trump would say in his address to the UN General Assembly with regard to the Joint Comprehensive Plan of Action (JCPOA). The 2015 pact resulted in the lifting of nuclear-related sanctions against Iran.

Trump said, “We cannot abide by an agreement if it provides cover for the eventual construction of a nuclear program. … The Iranian government masks a corrupt dictatorship behind the false guise of a democracy. It has turned a wealthy country, with a rich history and culture, into an economically depleted rogue state whose chief exports are violence, bloodshed and chaos.”

The president's harsh words about Iran and his lamentation about the JCPOA — reached between Iran and the P5+1 (China, France, Russia, the United Kingdom and the United States plus Germany) — went beyond Iranians' already negative expectations. Iranians reacted to the speech by launching the hashtag ShutUPTrump to express their displeasure with his words and stands. One Iranian, Javad Aghaie, tweeted, “I wish that before Trump's speech they had taken an alcohol and drug test so that he wouldn’t talk in such contradictory ways.”

Foreign Minister Mohamamd Javad Zarif was one of the first Iranian officials to protest the speech, tweeting, “Trump's ignorant hate speech belongs in medieval times — not the 21st Century UN — unworthy of a reply. Fake empathy for Iranians fools no one.”

The day after the speech, Gen. Mohammad Ali Jafari, commander of the Islamic Revolutionary Guard Corps, told the Tasnim news agency, “We should thank Trump for unmasking the real face of the US. The speech of the US president shouldn’t go unanswered, and I hope the [Iranian] president gives a decisive, revolutionary and enlightening response in his address.”

Jafari also said, “Taking a decisive position against Trump is just the beginning, and what is important strategically here is that the US witnesses a more painful response in practice and based on decisions Iran will take in the next months.”

Moreover, Ali Shamkhani, secretary of the Supreme National Security Council, told reporters, “The US president’s remarks stem from his poor understanding of international agreements and their legal bases, and [these] remarks are considered worthless in the eyes of the international community.”

He continued, “The US president is a liar and a supporter of takfiri and terrorist groups in the region. [During the 2016 presidential election] Trump described Obama as the founder of IS [Islamic State], but in recent months and by his order, the US military has repeatedly [helped] the terrorist forces to flee while they were surrounded."

Gen. Hassan Firooz-Abadi, former head of Iran’s armed forces, was surprised by the harshness of Trump’s remarks, telling the Fars News Agency, “This was the most embarrassing and hollow speech at the UN.” He added, “I pay condolences to the American nation for having such a president. Trump has turned away from God and is hostile to humanity. He was the incarnation of the Great Satan in the UN General Assembly, and he acted against the representatives of the worlds' nations as he is acting against the American people."

Meanwhile, some Iranian analysts said Tehran’s commitment to the JCPOA and not violating the deal has tied Trump’s hands — preventing him from scrapping it or presenting a new approach to Iran’s nuclear program and the JCPOA in his UN speech — in his attempt to persuade members of the P5+1 to ditch the agreement. Describing Iran as the winner after Trump’s speech, Sadegh Ziba-Kalam, a prominent Reformist analyst, wrote in Sharq Daily, “Many Iranians were waiting to see if Trump would say and announce new policies regarding the JCPOA. … The United States' president didn’t say anything new. He reiterated his previous remarks. Once again, he bitterly spoke of the JCPOA, his opposition, anger and dissatisfaction with it, but he couldn’t provide a new substitution for it. … Two years have passed since the JCPOA, and Iran’s behavior has been such that no pretext was given to the Americans [to destroy the deal].”

Warning of an escalation in tensions following Trump’s speech, Ali Khorram, former Iranian ambassador to the European headquarters of the United Nations in Geneva, told the Iranian Students' News Agency, “Prior to this, I had only heard such insulting words from Benjamin Netanyahu. Trump’s speech wasn’t diplomatic and conventional, and we can say that was a declaration of war.”

The former ambassador further said, “It seems that Netanyahu, Saudi Arabia, the hard-liners around Trump and Republicans had reached an agreement over this speech, and [we] can consider that [speech] as the result of their joint work … Iran should maintain Europe, Russia, China, and other countries’ [position] against the US by honoring the JCPOA. We should enhance the consensus that has been formed behind us.”

Iranian President Hassan Rouhani, in his speech to the UN General Assembly delivered Sept. 20, said of Trump's remarks about the JCPOA, “The new US administration only destroys its own credibility and undermines international confidence in negotiating with it or accepting its word or promise.”

Rouhani said of Trump's speech, “The ignorant, absurd and hateful rhetoric, filled with ridiculously baseless allegations, that was uttered before this august body yesterday, was not only unfit to be heard at the United Nations — which was established to promote peace and respect between nations — but indeed contradicted the demands of our nations from this world body to bring governments together to combat war and terror.”

Noting the reasons behind US discontent with the nuclear deal, Rouhani said, “Unfortunately, some have deprived themselves of this unique opportunity. They have imposed sanctions really against themselves, and now they feel betrayed. We were not deceived, nor did we cheat or deceive anyone. “

Rebutting allegations about Iran’s regional ambitions, Rouhani said, “Iran does not seek to restore its ancient empire, impose its official religion on others or export its revolution through the force of arms. We are so confident in the depth of our culture, the truth of our faith and tenacity and longevity of our revolution that we will never seek to export any of them in the way neo-colonialists do, with the heavy boots of soldiers.”

Rouhani also tried to define Iran's foreign policy, which he claimed is based on moderation. He defended Tehran’s presence in Iraq and Syria as an attempt to confront terrorism and took a swipe at Trump’s friendship with Saudi Arabia and his visit to Riyadh earlier in the year, saying, “Moderation is the synergy of ideas and not the dance of swords. … The path of moderation nurtures beauty. Deadly weapons exports are not beautiful; rather, peace is. … Today, we are on the front lines of fighting terror and religious extremism in the Middle East, not for sectarian or ethnic reasons, but for an ethical, humanitarian and strategic one.”