Despite the United Kingdom's prominence in the anti-Western conspiracies regurgitated by Turkey's pro-government press, the Anglo-Turkish relationship is pretty tight as the Turkish president tours London. 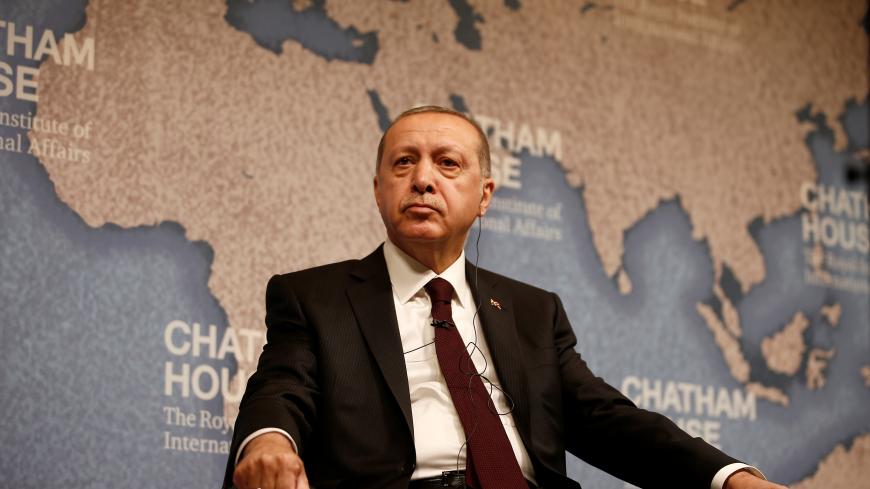 Turkey’s controversial “sultan” is set to get the full royal treatment from the country’s closest Western ally, the United Kingdom. President Recep Tayyip Erdogan will be received on Tuesday by Queen Elizabeth II, his first ever audience with the British monarch since he rose to power 16 years ago.

Coming six weeks before critical presidential and parliamentary polls in Turkey and amid global criticism of the country’s abysmal human rights record, the meeting has raised eyebrows.

“Tea with the queen is a pretty good photo op, especially if you are an autocratic president in the midst of a tough race for re-election,” wrote Simon A. Waldman, a British academic and the co-author of “The New Turkey and its Discontents.” In an op-ed for the EU observer, an online news platform, he continued, “This is why British Prime Minister Theresa May's red-carpet treatment is such a boost to Erdogan. And Britain is hoping that this will translate into profit."

Diplomatic observers air similar opinions about Erdogan’s trip, which includes high-profile meetings with May, other royals and today's appearance at the prestigious think tank Chatham House. Marc Pierini, a former European Union ambassador to Ankara and a non-resident fellow at Carnegie Europe, told Al-Monitor the visit “is mutually transactional” and in line with Britain’s’ post-Brexit strategy of re-invigorating alliances with a regional hegemon such as Turkey. And for Turkey, “it is obviously crucial to show that the incumbent president’s international standing does not suffer from the drastic deterioration of the rule of law in the country.”

Sinan Ulgen, who runs the Istanbul-based Center for Economics and Foreign Policy Studies, argued in a recent policy brief for the Brookings Institution, “The prospect of strategic realignment with the UK would provide [Turkey with] a much-needed alternative to having to choose between an unpredictable US president and a Russian president as strategic enablers."

Some British politicians have a decidedly different view. “Makes me feel sick to my stomach that our Govt are rolling the red carpet out for President Erdogan this week and trying to sell him more weapons. He is a a dictator & tyrant who locks up journalists, has installed a regime of brutal repression & torture and is butchering the Kurds,” tweeted Labor lawmaker David Lammy.

While the UK features prominently in the anti-Western conspiracies regurgitated daily by pro-government screeds, the Anglo-Turkish relationship is pretty tight.

The UK is among the strongest advocates of Turkish membership of the European Union even as it prepares to leave the body itself. Britain’s embrace of Turkey, a NATO ally, was seen by fellow EU members as a cynical bid to dilute German and French influence inside the union and to further advance US interests as well. Britain was among the first EU countries to shower sympathy on Erdogan after rogue officers sought to bloodily overthrow him in 2016.

The UK is Turkey’s 10th-largest trading partner. The volume of trade between the two countries hit $16.2 million last year and Erdogan told reporters ahead of his journey that he hoped this figure would rise to $20 billion. He also touched on a $113 million deal with the UK’s BAE systems to develop a new Turkish fighter jet. “Inshallah, we shall sign many more joint projects in the defense industry that will be of strategic significance,” Erdogan declared. British Foreign Secretary Boris Johnson, who boasts Turkish roots, has called for a post-Brexit free trade deal with Turkey.

The British ambassador to Ankara, Sir Dominick Chilcott, made similarly positive noises in an interview with the pro-government Hurriyet. He said that the involvement of Pennsylvania-based Muslim cleric Fethullah Gulen in the coup attempt was "certain" and that his government did not have "any doubt that it was a Gulenist coup." He also took a swipe at Ankara’s other bete noir, the Syrian Kurdish People’s Protection Units (YPG), saying, “We are not naive. We understand there are very close links between the YPG and the PKK.”

He was referring to the Kurdistan Workers Party, an armed Kurdish group that has been fighting in turn for statehood and Kurdish autonomy in Turkey’s mainly Kurdish southeast region since 1984. The YPG is intimately bound up with the PKK, drawing heavily on its military and other cadres to cement its self-styled administration in northeastern Syria, but it is also the US-led coalition’s premier partner against the Islamic State.

Although the UK is a key member of the coalition against the Islamic State, it claims to have have ‘limited contact’ with the YPG and none whatsoever with the PKK. British nationals who volunteer to fight in the YPG’s ranks have faced prosecution at home. Responding to a recent parliamentary report on the Kurds, the Foreign Office said it would urge the YPG to "distance themselves from the PKK and its terrorist activity.”

A commander in the YPG-led Syrian Democratic Forces (SDF) confirmed that British officials had been querying the YPG about its links to the PKK. “We tell them these are blood ties, not organic ties; we are all Kurds,” the commander told Al-Monitor via WhatsApp.

Washington’s ongoing support for the YPG has sent Turkish-US relations into a tailspin. But the UK has managed to evade Turkish ire, even though it too deploys its special forces in the Kurdish-controlled areas of Syria. A Western official speaking to Al-Monitor on strict condition of anonymity observed, “As is the case of several coalition members, the [British] military is all in [with the YPG/SDF] but its assistance, and some of its civilian policy people, are very deferential to Turkey.”