Women ready to run for office in Egypt

Egyptian women are being groomed to win elections and become effective leaders once they do. 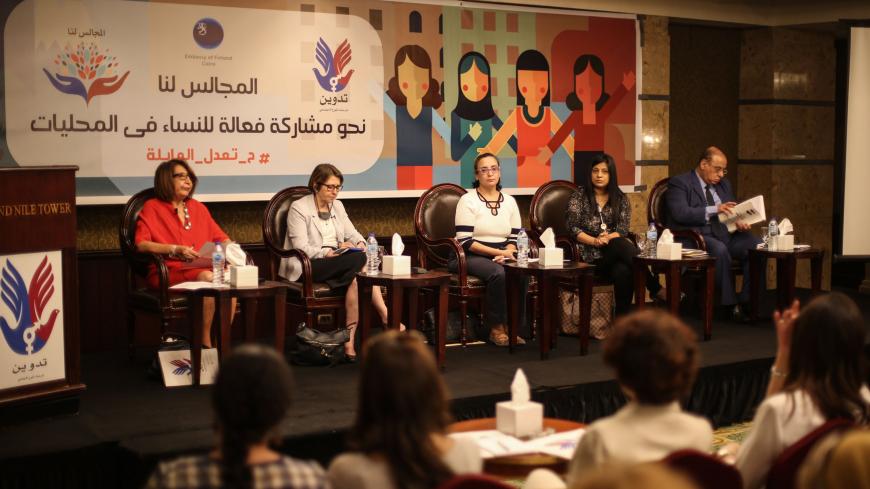 People take part in an event hosted by Tadwein to promote the participation of women in municipalities, Cairo, Egypt, April 24, 2018. - Facebook/Tadwein

CAIRO — Egypt has yet to pass a law needed to hold local elections, but hundreds of women will not be wallflowers waiting for an invitation to run for office. Thanks to an initiative dubbed “The Councils Are Ours,” potential candidates will be prepared when the elections are finally held for the first time in eight years.

The Tadwein Gender Research Center's program is designed to support women's participation in local council elections. During a conference at the end of April, the women who received training last year were introduced. So far, the project has groomed 320 women in seven of Egypt's 27 governorates. That might seem like a drop in the bucket — considering the Egyptian Constitution allots a quarter of local councils’ roughly 64,000 seats to women — but the impetus could increase exponentially.

Hantish told Al-Monitor the women's education stretches over a year and includes discussions with female decision-makers in parliament such as Nadia Henry and Manal Maher. This could help more women provide input into the pending legislation on local council administration. Parliament has been discussing that legislation for two years, and parliament Speaker Ali Abdel Aal said it will be issued this year so elections can be held before the end of 2018.

After the January 25 Revolution in 2011, parliamentary and local councils were dissolved. Due to the subsequent absence of a law regulating local administrations, no local councils have been elected for eight years now.

Tadwein executive director Amal Fahmy pointed out that the lack of local councils in Egypt has been a burden on parliament, whose members have been called on to meet demands for services from their constituencies, which is essentially the role of local councils.

Fahmy said Tadwein's program includes awareness campaigns about women’s roles and the importance of their participation in local council elections and in the public domain in general. The initiative teaches women how to run independently or as part of a slate, and how to face problems they might encounter in elections — mainly the way society perceives them and their roles within the councils.

Maher told Al-Monitor the project's importance lies in changing communities' attitudes to accept women in elected posts. She noted Egyptian women face prejudice even today, as many people still see their role as being limited to that of housewife. The project includes a number of awareness campaigns to change society's view of women so it can accept that they are able to work in the public sphere like men, she said.

Howaida Ezzat, who before the revolution was a member of the local council in Helwan, on the outskirts of Cairo, ran twice and won once. She has joined the training program.

“The program has helped me enhance my skills in the political work in Egypt and my abilities to run in the elections. I ran twice in the local elections. I was banking on my contacts, relatives and neighbors, rather than on a proper political platform,” she told Al-Monitor.

Ezzat said that the initiative has provided her with expertise on the role she should play in a local council, and how to participate effectively in local elections, particularly since the political landscape has changed since the revolution. She stressed that after the local council elections, she plans to throw her hat in the ring for the parliamentary elections.

The current Egyptian parliament has the largest representation of women ever, with 14.9% of the seats, according to 2016 statistics from the National Electoral Commission. The Tadwein project’s officials hope to achieve at least a similar percentage in local elections once the legislation is approved.

Maher told Al-Monitor the local administration draft law is one of the most-discussed bills in the community, as it was put forth by governors from all Egyptian provinces. She believes it will be impossible to hold local elections in 2018, which means the long-delayed draft will not be needed right away. The next parliament session is slated for October.