Fed up with increased restrictions on information and less on-the-ground access, some Democrats are seeking more transparency regarding the Donald Trump administration’s military operations throughout the region. 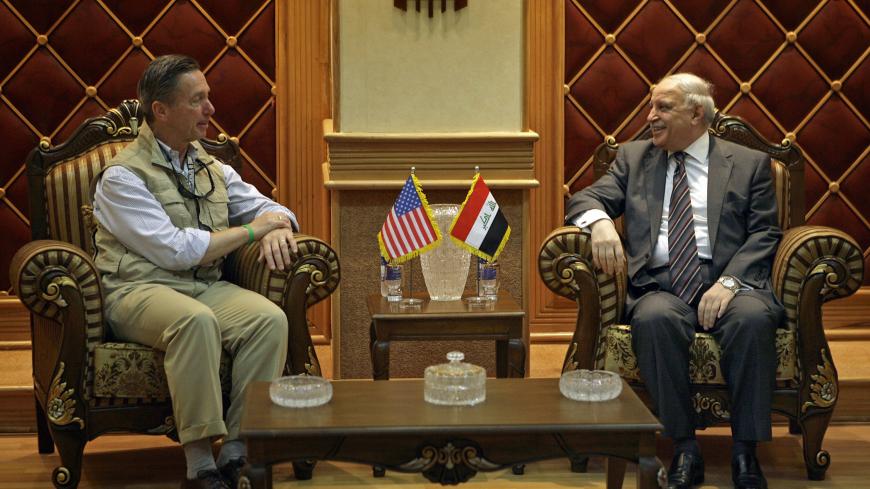 As the top Democrat on the House panel overseeing the Defense Department, Rep. Stephen Lynch of Massachusetts has traveled to Iraq almost two dozen times under three different presidents.

But now, that ability to monitor US military actions and foreign aid, Lynch insists, is being compromised by what he contends is a plummeting level of transparency under President Donald Trump, even as the administration promises to confront Iran throughout the Middle East. With the Pentagon restricting congressional travel to the region and classifying more information on its operations, Lynch and several of his Democratic colleagues have begun pushing back.

“I would say since the Trump administration came in, we have seen a gradual increase in limitations on [congressional delegations], especially Iraq and Afghanistan and understandably Syria,” Lynch told Al-Monitor in an interview this week. “The work we’ve been doing under [Barack] Obama and under George W. Bush, we’ve had far greater access.”

The Pentagon this month restricted access for senior Defense Department officials to Iraq and Kuwait, a key entry point into Iraq, until mid-June and then again from late August through September, Al-Monitor has learned. At the same time, Defense Secretary James Mattis and Joint Chiefs Chairman Joseph Dunford sent a letter to Congress asking members and staffers to limit travel to Iraq and Kuwait during those times.

The measure coincides with the recent elections, the Ramadan season and the March transfer of control over the headquarters in Baghdad for the anti-Islamic State (IS) ground operations, according to the Pentagon.

“During this time, commanders would not be able to adequately host senior-level visitors and while supporting these competing requirements,” a spokeswoman told Al-Monitor. “DoD supports members of Congress in their need to understand DoD missions, provide oversight and visit deployed US forces, however, we do put limited travel restrictions in place when conditions on the ground require military commanders to focus their resources on essential mission requirements.”

Additionally, a House aide told Al-Monitor that the Pentagon imposes travel restrictions throughout the region “every summer during the fighting season or when units are in rotation.” The Army announced Tuesday that the 18th Airborne Corps, stationed at Fort Bragg, would be deployed to Iraq in the fall, relieving the 3rd Corps.

Those explanations haven’t placated Lynch, who has offered an amendment to the annual defense bill that calls on the Pentagon to “authorize and facilitate meaningful access and assistance” for congressional delegations that have made a “reasonable request” to access “missions and operations” in Iraq, Kuwait, Syria and Afghanistan. The House is voting on the bill this week.

“All things considered, I think I’ve been fairly supportive of our operations in both those countries,” said Lynch, who voted in favor of the Iraq war authorization in 2002. “I expressed my displeasure and disappointment with the fact it seems to be at the whim of the Department of Defense as to whether Congress gets to do its constitutional duty to provide oversight.”

While the Pentagon has offered to make exceptions for some lawmakers, Lynch maintains that access to certain areas remains problematic. Most recently, he has been trying to access Mosul for a firsthand look at reconstruction efforts in the devastated city following its liberation from IS last year. He noted that even the Bush administration eventually allowed him to access Sadr City during the height of Muqtada al-Sadr’s insurgency to examine a multimillion-dollar US water treatment project — even if it took him five trips to finally gain access.

“There’s no good justification,” he insisted.

Separately, some Democrats are balking at what they view as the Trump administration’s penchant for classifying materials.

Last week, for instance, the president handed Congress a classified report outlining the administration’s strategy in Yemen, even though lawmakers had requested an unclassified version with a classified annex as needed. Rep. Ro Khanna, D-Calif., a harsh critic of the Saudi-led campaign against the Houthi rebels in Yemen, has responded with an amendment to this year’s defense bill requiring an unclassified assessment of the civil war’s impact on the growth of Islamic State and al-Qaeda branches in the country.

“The administration has not been forthcoming about our role in Yemen,” Khanna told Al-Monitor. “An explanation is owed to the American public and I want to see a transparent report.”

“There’s a lid being put on access to firsthand information, and then the information they choose to give us and the inspector general is also limited in terms of circulation,” he said.

Hoping to curb this trend, Lynch has also offered an amendment requiring the Pentagon to rescind its decision to redact troop levels for Afghanistan, Iraq and Syria in its quarterly public reports.

Jack Detsch contributed to this story.