Where have those displaced from Syria's Douma gone?

A new refugee camp was established on the outskirts of al-Bel village to accommodate opposition fighters from Jaish al-Islam, as well as their family members and other civilians, who fled Douma. 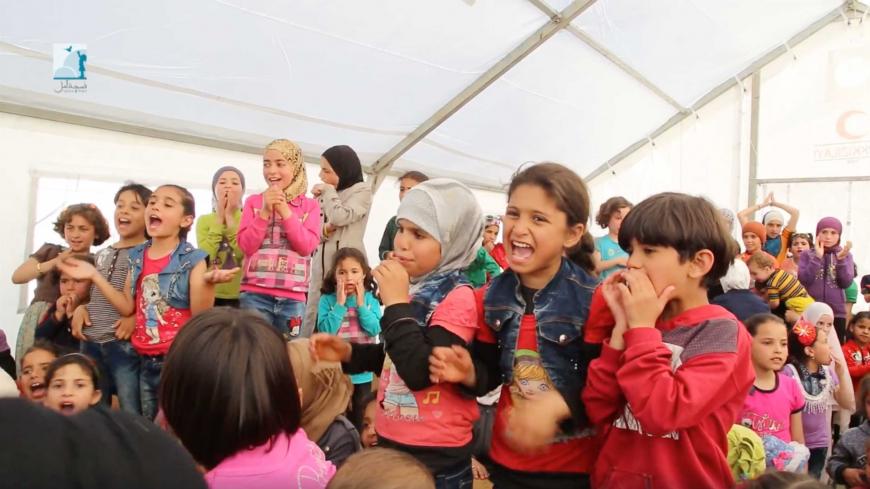 Children who were evacuated from eastern Ghouta play during a day of activities organized in collaboration with Space of Hope, al-Bel camp, Aleppo, Syria, April 29, 2018. - Facebook/spaceofhope.org

ALEPPO, Syria — The administration of al-Bel camp, which accommodates those displaced from Syria's eastern Ghouta, organized a full day of activities for about 500 children in cooperation with Space of Hope on April 29.

The director of the nonprofit Space of Hope in Aleppo’s countryside, Mohammad Omar, told Al-Monitor the day's activities were centered around children. "Presents were distributed to the children in an attempt to compensate for the distress they have suffered during the siege in eastern Ghouta over the years," he said. "We are planning to organize more activities in the camp to help the children get rid of the negative psychological effects of the war in eastern Ghouta."

Omar added, “The children enjoyed the activities, as many suffer from social isolation and psychological problems. Our recreational activities have contributed to putting a smile on their faces. Our association will also provide psychosocial support for children in the coming period.”

Al-Bel camp in Aleppo's northern countryside shelters hundreds of internally displaced persons (IDPs) who fled eastern Ghouta. On April 1, AFAD, a humanitarian organization affiliated with the Turkish government, established the camp where the fourth batch of IDPs arrived from Douma city in eastern Ghouta on April 10.

The camp has 700 tents and is now home to about 5,000 people. The camp administration intends to build another camp right next to al-Bel that would have space for 400 tents.

On April 8, the opposition-affiliated Jaish al-Islam faction reached an agreement with Russian forces, stipulating that Jaish al-Islam fighters and their families and other civilians willing to leave had until mid-April to exit Douma and head toward the Euphrates Shield area in the countryside of Aleppo, which has become a shelter for thousands of IDPs from various Syrian regions.

According to Mahmoud Doumani, a fighter from Jaish al-Islam currently living in al-Bel camp, so far just over 19,000 IDPs have arrived in nine consecutive batches, 8,000 of whom are Jaish al-Islam fighters and the rest are civilians.

Doumani told Al-Monitor that the IDPs include 12,000 women and children, some of whom live in al-Bel camp and others who took refuge in camps in Aleppo’s countryside near Azaz.

Al-Monitor visited al-Bel camp, where the tents are erected in an organized way on the western outskirts of al-Bel village. It has a small medical center run by the camp administration with nurses and a doctor providing health services. A large tent is set up in the middle to serve as a school. The children use the empty spaces to play soccer and run around, to forget about the shelling and siege they encountered during their stay in eastern Ghouta and the hardships of the long journey that took them to al-Bel.

Director of al-Bel camp Fahed Hassoun told Al-Monitor, “There are 700 tents in al-Bel camp; every IDP family has its own. The camp administration — through AFAD’s mobile kitchen — provides three meals a day for the families. The medical center provides first aid services and medicines, and critically ill patients are transferred to nearby hospitals in the Euphrates Shield area.”

He added, “The majority of the residents of al-Bel camp are children. This is why the camp administration established a school as soon as possible so that the children could get back to their education, which was put on hold for so long in eastern Ghouta due to the shelling and siege. A number of teachers from the camp were selected to teach at the school, which opened its doors April 30.”

The camp administration has organized several recreational activities to help children overcome psychological problems, Hassoun noted. Women in the camp are also provided with psychological support, as many suffer from depression due to the memories of the war and siege they brought with them to their new residence in the countryside of Aleppo.

Malak Homsi, head of the women empowerment department at Space of Hope, told Al-Monitor, “We are setting up a program in cooperation with al-Bel camp administration to support the women there, many of whom are suffering from psychological problems after losing members of their families and being forced to leave Ghouta. We will work on helping these women adapt to their new lives in the countryside of Aleppo.”