Human rights groups warn that thousands of Afghan refugees in Turkey face abuse and deportation as the country focuses on the millions of Syrian asylum-seekers ahead of this summer's vote. 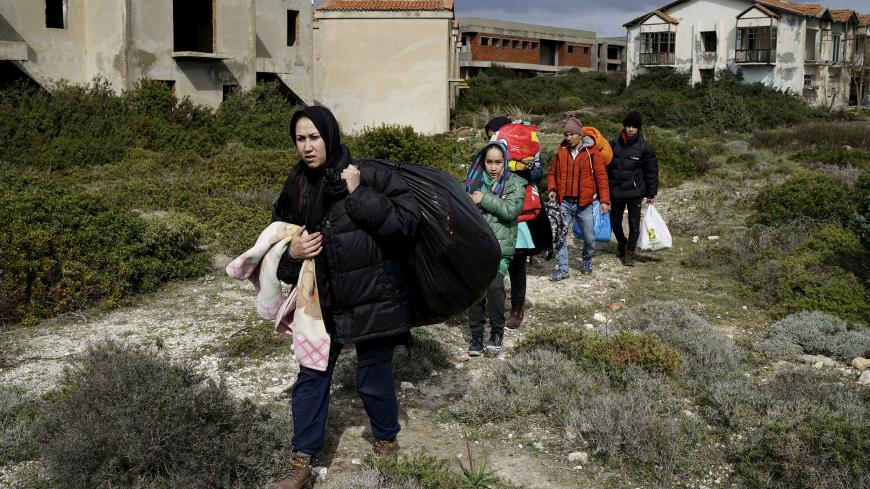 Afghan refugees walk on a beach where they will wait to board a dinghy sailing for the Greek island of Chios from the western Turkish coastal town of Cesme, Turkey, March 6, 2016. - REUTERS/Umit Bektas

Turkey’s waning enthusiasm for some 3.5 million-plus Syrian refugees is a compelling topic as millions of Turks prepare to cast their votes in snap polls due to be held on June 24.

Rights groups say the desperate plight of the rising wave of Afghan refugees in Turkey, however, has received scant attention as thousands are unlawfully deported by Turkish authorities to face incalculable risks back home.

In a press release issued today, Amnesty International condemned Turkish authorities for the way they're handling Turkey's swelling population of Afghan refugees, currently estimated at 145,000, who for the most part live in appalling conditions. The London-based watchdog said some 2,000 Afghans who fled to Turkey “to escape conflict and the worst excesses of the Taliban are in detention and at imminent risk of being forced back to danger.” The group added that the Turkish authorities appeared to be ramping up what it called "a deportation spree that has seen 7,100 Afghans rounded up and returned to Afghanistan since early April." The Afghans are being treated, it read, “more like criminals than people fleeing conflict and persecution."

Violence in the conflict-wracked Central Asian state has escalated in recent months. At least 57 people were killed on April 22 when a suicide bomb attack claimed by the Islamic State targeted a voter registration center in the capital, Kabul. Over 120 civilians and 322 others were injured in separate attacks in March alone.

Since the start of 2018, Turkish authorities have apprehended at least 27,000 Afghans at the Iranian border, more than half the total 47,000 Afghans apprehended for the whole of last year. The recent deportations were reportedly agreed upon between Afghanistan and Turkey during Turkish Prime Minister Binali Yildirim’s official trip to Kabul in early April.

Some 102 Afghans who were dumped by smugglers in a forest in the Mediterranean province of Antalya after being assured they had arrived in Istanbul will likely join their ranks if they haven’t already. The victims had paid between $3,000 and $9,000 for their aborted attempt at freedom, Hurriyet reported.

Deputy Prime Minister Veysi Kaynak raised the alarm last year, claiming that 3 million refugees in neighboring Iran were seeking to come to Turkey and many were Afghans. Iran’s Foreign Minister Mohammad Javad Zarif denied the claim as "bizarre." Kaynak then retracted his statement, insisting that his words had been misinterpreted, though he had spoken them clearly to CNNTurk. Western diplomats speculated that Kaynak’s scaremongering might be intended to extract further funding from the European Union. Turkey has since been erecting a wall much like the one along its 900-kilometer (560-mile) border with Syria on its mountainous frontier with the Islamic Republic to keep illegal migrants at bay. The 144-kilometer (90-mile) cinderblock barrier is expected to be completed this year.

Anna Shea, Amnesty’s researcher for refugee and migrant rights, told Al-Monitor, “The number of deportations is staggering.” The Interior Ministry declared yesterday it intended to reach 10,000 deportations by the end of the week. Amnesty insists the legal basis for the deportations is fuzzy, though Turkish authorities told the group all the returns were voluntary, and authorities seem keen on advertising their actions.

The Twitter feed of Turkey’s Migration Authority, the Goc Idaresi, which is attached to the Ministry of Interior, brims with photographs of Afghan deportees waving merrily inside charter planes carrying them back to Afghanistan.

“It's very unusual for a government to advertise such deportations so blatantly. These are usually conducted in a confidential way," said Shea. "The Turkish authorities apparently want to send a message."

The message may be directed at the EU. Under the terms of a controversial deal struck in 2015, the European bloc agreed to fork out billions of dollars in cash in exchange for Turkey serving as a gatekeeper for millions of refugees seeking a better life inside its borders. “It could either be ‘Look, we are doing our job,’ or ‘Look, there are millions more heading your way. You rely on us to stop them, so beware,’” said a spokesperson who works on refugee affairs for an Istanbul-based nonprofit. The official, who spoke on condition of anonymity, told Al-Monitor, “I could go to jail for saying these things, but we have credible reports of Afghan refugees being tortured in detention centers.”

Turkey has one of the largest refugee populations in the world. The World Health Organization said the cost of health services offered to refugees in Turkey has surpassed $10 billion, putting it at the top of the list of countries offering relief to refugees.

Turkey has been globally commended for this generosity. But it retains a geographic limitation on its ratification of the 1951 UN Convention on Refugees, saying that only those fleeing “events occurring in Europe” can be formally recognized as refugees. In practice, this grants Turkey impunity in its handling of non-European asylum seekers. In 2013, it passed an asylum law and another in October 2014 that lets refugees apply for work in Turkey, among other things. Syrians, however, remain the primary beneficiaries of the new measures, rights groups say.