"No amount of American blood or treasure can produce lasting peace and security in the Middle East," Trump says. 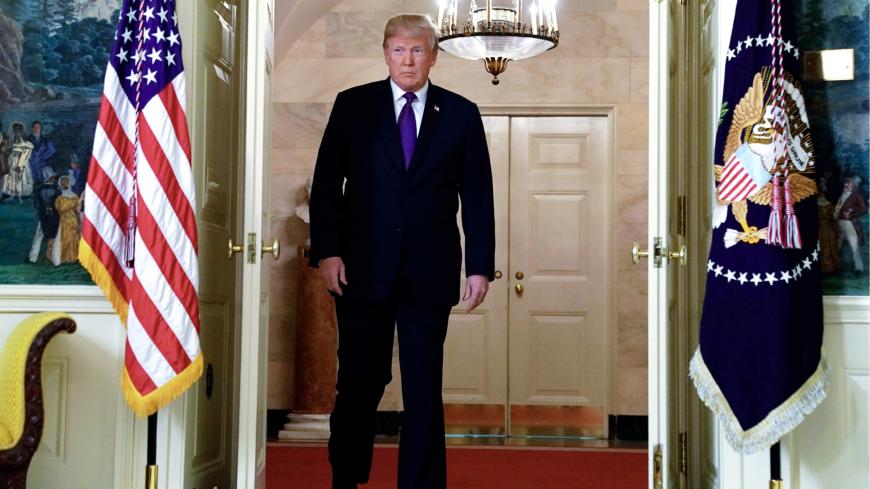 US President Donald Trump arrives to announce military strikes on Syria at the White House in Washington, April 13, 2018. While Trump made the announcement the night of April 13 US time, the strikes took place the morning of April 14 in Syria. - REUTERS/Yuri Gripas

The Middle East a "troubled place"

While the United States may be “locked and loaded” to respond to future chemical weapons use, the Trump administration is otherwise planning its exit from Syria.

In announcing the April 14 missile strikes by the United States, United Kingdom and France on Syrian chemical weapons facilities, US President Donald Trump also explained his broader approach to Syria and the region; other than defeating the remaining forces of the Islamic State (IS), this approach envisions a much-reduced American role.

“America does not seek an indefinite presence in Syria, under no circumstances,” Trump said. “As other nations step up their contributions, we look forward to the day when we can bring our warriors home.”

Trump has called on US partners in the region to “take greater responsibility for securing their home region, including contributing large amounts of money for the resources, equipment and all of the anti-[IS] effort. Increased engagement from our friends, including Saudi Arabia, the United Arab Emirates, Qatar, Egypt and others can ensure that Iran does not profit from the eradication of [IS].”

After the missile strikes, US Secretary of Defense James Mattis called for “all civilized nations to urgently unite in ending the Syrian civil war by supporting the United Nations backed Geneva peace process.”

While Trump has established that he, unlike his predecessor, will enforce the red line on Syrian chemical weapons use, the US president also made clear that he meant it when he said the United States would “get out” of Syria “very soon.”

“Looking around our very troubled world, Americans have no illusions,” Trump said. “We cannot purge the world of evil or act everywhere where there is tyranny. No amount of American blood or treasure can produce lasting peace and security in the Middle East. It’s a troubled place. We will try to make it better, but it's a troubled place.”

So with Trump’s declaration of “Mission Accomplished!” we are, for the most part, back to the future in Syria.

Despite the expected recriminations between Washington and Moscow at the UN Security Council, the US-Russia military deconfliction channel was used “frequently” before the missile attacks, and, according to Joint Staff Director Lt. Gen. Kenneth F. McKenzie Jr., while Russian air defense systems in Syria were operational, they were not "employed" during the US-led operation.

The action therefore turns back to the Astana diplomatic and cease-fire process led by Russia, Iran and Turkey, as we explained here last week. The Syrian government, backed by Russia and Iran, will likely soon conclude military operations in eastern Ghouta, and consider how and when to begin an offensive against Salafist and other armed groups in Idlib.

Trump’s call for US partners in the region to step up in Syria is unlikely to have an effect. Riyadh and Abu Dhabi are bogged down with the war in Yemen and their feud with Qatar, both of which have become irritants in US-Gulf relations. Egypt has its own internal challenges that will keep it sidelined from any leadership role in the region.

It would be a disaster for Syria if Saudi Arabia and Qatar respond to Trump’s call by increasing their support for radical Salafist armed groups, such as Ahrar al-Sham and Jaish al-Islam, which often get lumped in most media reporting with the Syrian “opposition.” The ideology of both groups is barely distinguishable from al-Qaeda and IS. Ahrar al-Sham, in particular, has had on-again, off-again alliances with al-Qaeda affiliates. Both groups have been driven out of Aleppo and Ghouta by Syrian government forces and taken up residence in Idlib, where they terrorize local populations under the guise of Islamic law.

Pinar Tremblay points out Trump did not include Turkey in his list of US friends whom he expected to take greater responsibility in Syria. Turkish President Recep Tayyip Erdogan supported the US-led attack, but added April 14, “If a genuine step for the security, peace, future and rights of the Syrian people is to be taken in Syria, first of all the same principled stance must be displayed toward both the regime and all terrorist organizations including Daesh [IS] and the PYD [Syrian Kurdish Democratic Union Party].”

We wrote in August, “Turkey’s preoccupation with beating back Syrian Kurdish control in northern Syria could open the door to some type of accommodation with Damascus.” Al-Monitor has covered Iranian and Russian attempts to broker an accommodation between Damascus and the PYD that would be acceptable to Turkey.

There is a rightful and understandable concern by US decision-makers about "selling out" Syrian Kurdish forces, which have been America’s most effective and reliable local partners in military operations against IS. But with Trump’s clearly stated intention to leave Syria, the PYD may see its window beginning to close for a deal with Damascus, and by extension Ankara, through Russian and Iranian mediation.

Amberin Zaman reports the PYD was cautious in its public statements leading up to the US missile attacks, and what comes after. “The Syrian Kurds are clearly smarting over the fact that Washington appears willing to go to war against Assad over Douma when it remained inert as Turkey gobbled up Afrin,” Zaman writes. “Estimates vary, but at least 300 civilians are believed to have perished in the Turkish offensive and some 140,000 were forcibly displaced.”

Fehim Tastekin explains Turkey’s dilemma over next steps in Syria. “Russia supports Syrian President Bashar al-Assad,” Tastekin writes. “The Turkish government, which had been pursuing a policy of absolute hostility toward Assad, recently reversed its tradition of blaming the Damascus regime for every disaster. … This hinted that Turkey might be going along with Russia in a partnership that's not all that robust. … Ankara wants to punish the Assad regime. But Turkey has to be careful in its relations with Moscow for a number of reasons: the S-400 Russian missiles Turkey wants to buy, ever-deepening economic ties, rapidly progressing construction of the Turkish Stream natural gas pipeline, Turkey's offensive in Afrin and other military operations conducted in Syria with Moscow’s green light, and the Syrian peace process being forged in Astana, Kazakhstan.”

“Another topic calling for Turkish diplomacy is Ankara's opposition to the largely Kurdish Syrian Democratic Forces (SDF), which Russia supports and which is also strongly backed by the United States and France,” Tastekin adds. “And a striking reminder of the important, though sometimes costly, Russian green light is the very recent declaration by Russian Foreign Minister Sergey Lavrov that Turkey should hand over control of Afrin to the Syrian army — something Turkey isn't anxious to do.”

“Moreover, Erdogan counts on domestic political profit from operations in Syria — which could suffer under potential Astana compromises,” Tastekin continues. “Turkey almost certainly will have to modify its Kurdish policy, as Russia has stated the Kurds should have a voice in the Syrian peace process. And, if Erdogan agrees to follow the course set by the United States in coordinating with the Kurdish People's Protection Units (YPG) and SDF, he could easily upend his domestic support in the coming elections.”

“Contradictory factors are currently preventing Turkey from taking clear-cut positions between the two camps,” Tastekin concludes. “But if the situation gets more serious, Ankara will have to make a choice. Above all, Turkey will face the issue of what to do with the Syrian areas it currently controls. It will either stay in the game together with Russia, abandon those territories and look for ways to stay neutral, or offer its military presence in Syria (along with the local militias it supports) to the service of the West-Gulf coalition.”